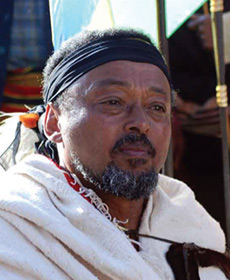 Wolde Tadesse was born and raised in Gamo, Etiòpia. He grew up herding his grandfathers animals, helping in the fields, delivering elders errand, attending assemblies and festivals and also attending local schools in various locations Geretse, Balta, Boroda, Qucha, Chencha and Arba Minch following his father who was the first Gamo school teacher. This mobility in the mountains exposed Tadesse to the complexity of structures of social, spiritual and livelihood governance structures that coexisted with the structure of the state. He was shaped by this exposure deeply and his understanding of the world has drawn a lot from that background. His community of Gembela in Chencha gave him the blessing to be an elder some years back in a ceremony held in the Zozo Sacred Site and he has since been enabled to speak for his community.

Tadesse is married to Elizabeth Ewart, a Lecturer in Anthropology with the University of Oxford, who he met at the London School of Economics where they both received their PhD in Anthropology. He has been with the Christensen Fund since October 2003 as a Program Officer for the African Rift Valley.