A law on indigenous management of sacred sites in Guatemala

Multiple sacred natural sites in the highlands of Guatemala are involved in this case of law formation for sacred sites or “sitios sagrados” in Guatemala. They are expropriated by the state and companies because they lie in areas marked for road construction, housing, tourism or conservation. Tikal, a protected area with World Heritage status is just one example.

Custodians
Oxlajuj Ajpop, the Council of Principals consists of 52 representatives, 24 from each of the linguistic communities of Maya, Garifuna and Xinca origin, and 28 representatives appointed in proportion to the size of each linguistic community. As indigenous people, Oxlajuj Ajpop believes that the Maya calendar shows the way forward. They continuously consult the sacred fire, their ancestors, traditional leaders and community leaders.

Vision
The aim is to guarantee the historical, cultural and spiritual rights of the indigenous peoples by ensuring the recognition, respect, use, conservation and administration of, as well as access to, sacred sites of indigenous peoples, located in the national territory of Guatemala. In the coming years, the Commission for the Definition of Sacred Sites will organise councils on sacred sites, based on linguistic territories and they will form multidisciplinary groups based on Maya scientific background and Western science to discuss the administration of sacred sites.

Coalition
The COMPAS network and the IUCN are world-wide networks aiming to ensure endogenous development and conservation of natural resources. They support Oxlajuj Ajpop and the Guatemalan Commission of the Definition of Sacred Sites with information and organizational advise.

Action
The Guatemalan Commission of the Definition of Sacred Sites initiated the process of forming laws that protect the rights of local inhabitants on sacred sites in Guatemala. They work together with Oxlajuj Ajpop in the formulation of law proposals for the Guatemalan government, and organize meetings with the Council to keep this topic under government attention.

The Commission for the Definition of Sacred Sites has continuous meetings with deputies of the Congress, aiming to approve the law. 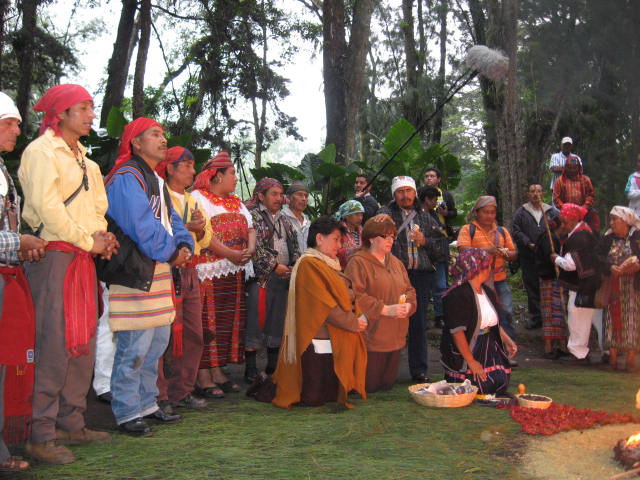 Threats
The government is divided in parties that support the law proposal on sacred sites, and parties that oppose it. Certain parties do not recognise the historic, spiritual and cultural rights that the law links to private property. They see sacred sites as a cultural heritage part of the nation in contrast to part of local communities’ ownership. Big economic enterprises are trying to move these political parties towards getting the article that protects the individual rights on sacred natural sites out of the law.

Results
The Commission for the Definition of Sacred Sites and Oxlajuj Ajpop have succeeded to put the protection of sacred sites on the political agenda of the Government. They have shown to be able to face the pressure of external economic forces, but no final decision has yet been made.
Oxlajuj Ajpop is increasingly promoting its work amongst Mayan communities in Guatemala. Oxlajuj Ajpop is supported by international networks which enable them to bring their case to a global audience and reach decision makes such as the Convention of Biological Diversity.