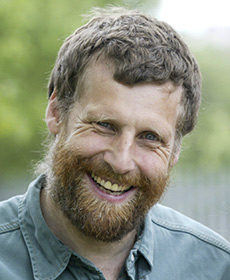 His books include Hell & High Water: Climate Change, Hope and the Human Condition on the cultural and spiritual dimensions of climate change, Rekindling Community on the spiritual basis of inter-relationship, and Soil and Soul: People versus Corporate Power on land reform and environmental protection – the latter described as “world changing” by George Monbiot, “life changing” by the Bishop of Liverpool and “truly mental” by Thom Yorke of Radiohead.

For the past 9 years he and his wife, Vérène Nicolas, have lived in Govan where he is a founding director of the GalGael Trust for the regeneration of people and place. A Quaker, he lectures around the world at institutions including WWF International, the World Council of Churches, the Russian Academy of Sciences and the UK Defence Academy (on nonviolence). His driving passion is to explore the deep roots of what it can mean to become fully human, and use such insights to address the pressing problems of our times.