Ancient values in a modern Economy: The Enduring influence of Lindisfarne, United Kingdom

The 12th century St. Marys Church, believed to be on the site of the wooden church built by St. Aidan in the 7th century (left), and ruins of the 12th century Lindisfarne Abbey, with the edge of Lindisfarne village in the background (right). (Source: Robert Wild, 2009.)

Site:
The Holy Island of Lindisfarne and its surrounding marine wetlands is an important area for coastal habitats and wintering wildfowl. It has been a Christian holy site and pilgrimage centre since AD 635 when it served a pivotal role as a “cradle” of Christianity in northern Britain. One of its leading saints St Cuthbert was considered as one of England’s first ‘nature conservationists’ and he is still the most recognised saint in the area. Parts of the island and all the surrounding wetlands are a National Nature Reserve, while the island itself houses a village, historic buildings, several churches and retreat centres. In recent years, it has hosted an increasing number of visitors and pilgrims. The demands of visitors have the potential to cause an imbalance between the islands values including those of the local community heritage, ecology and economic.

Custodians:
As well as its religious and historical importance Lindisfarne is a typical Northumbrian village with a small resident community of 100 people, consisting of long-established families who were mostly farmers and fishermen, as well as new residents. The local population has been declining over recent years, with people leaving to seek jobs and housing elsewhere. There are several local churches and Christian groups that work together. Historic England and the National Trust manage the historic heritage, and Natural England the nature conservation interests. The Community Development Trust represents the resident community.

All places and all people are sacred. We have to recapture that, and respect even the smallest wood as well as the largest rainforest.
– Canon David Adam, Vicar of Holy Island (1995-2003).

Coalition:
Each of the management institutions on Holy Island have their own remit and function and until the development of the Holy Island Partnership there was not a mechanism to coordinate this work. The partnership has the potential to bring the different actors to keep in balance the community, ecological, religious and economic values of the island.

Conservation tools:
The Lindisfarne National Nature Reserve staff engages in several management practices, including livestock grazing to maintain the species-rich grasslands. The wildfowl are counted monthly as part of a national monitoring program. Visitor management includes regulating the access to the most sensitive areas, especially the sand dunes. Invasive alien species are monitored, the most notable of which is the New Zealand piripiri burr, historically imported in wool for the region’s cloth mills. The construction of a causeway, built in 1954-1964, has perhaps caused the biggest changes to the reserve. For example, a local rise in the sand flats in the vicinity of the causeway has hastened the conversion of mudflats to sand flats and salt marsh, thereby reducing the area of some habitats important for wildfowl grazing. Parking becomes limited during the peak season, when cars park along the main access road by the dunes; Natural England, the conservation institution responsible for declaring and managing England’s nature reserves, is under some pressure to prevent this.

Results:
There is a growing awareness that separate institutions should aim at working together more. The 2005 Natural England vision for Lindisfarne National Natural Reserve put emphasis on a holistic and integrated approach. The Community Development Thrust is widening its remit and gaining in experience, and is therefore better able to represent the community with larger institutions on a more equal footing. Some community members can now reside locally at affordable costs, helping to keep the heart of the local culture intact.

Vision:
The Holy island of Lindisfarne is managed by a wide range of institutions, all with the intention to conserve an aspect of the site, be it religious, natural or cultural. When asked the question ‘who is in charge of the Holy land?, the universal response is “no-one”. Even though a single structure to provide direction would be both inappropriate and ineffective, a greater collective sense of direction might be needed.

Action:
Each of the institutions has an active work programme to address their specific areas of work. Importantly from the community perspective the Community Development Trust has built eleven new community houses that are rented to community members who want to stay on the island but cannot afford the high house prices. The first steps are now being taken toward such a process with the formation of a proposed Holy Island partnership. This is in its very early stages and is not widely known among some of the key players. While a forum is likely to be essential, it may not be sufficient, especially at the start; a consensus-building process may need to be undertaken to engage with a wider group of people than the forum representatives.

Policy and Law:
No clear mechanisms have been established to discuss or decide the trade-offs between different visions and development paths. The island is now dealing with these within the framework of national law. Some of the players are very large national-level government, church or charity organizations that have specialized mandates, bureaucratic tendencies, and remote and relatively inflexible decision-making mechanisms, while other key groups, especially the local community members, have no formalized voice in the decision-making process. 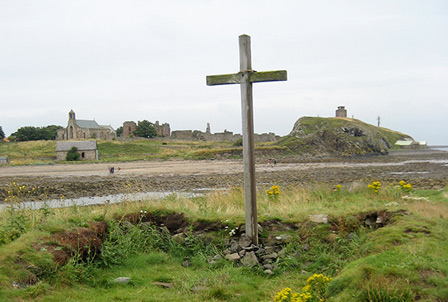