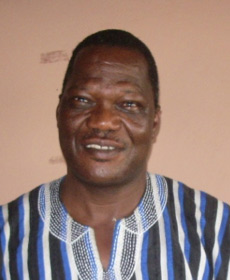 Bernard Guri Yangmaadome is the Executive director of the Center for Indigenous Knowledge Organisational Development (CIKOD). CIKOD's main purpose is to develop methodologies for the strengthening of traditional authorities and civil society organisations to facilitate sustainable grassroots organizational development that gives voice to the poor and vulnerable rural families.

Bernard is a development practitioner with special interest in Indigenous knowledge and institutions development. He served for nine years with the Catholic Bishops’ Conference as the National Co-coordinator for Socio-Economic Development. From1993 to 2000, he was employed by the Konrad Adenauer Stiftung of Germany as a Programme Officer in the Sub Regional office in Cotonou in the Republic of Benin and later as Programmes Director in the Ghana office. Bernard co-founded the Ecumenical Association for Sustainable Agriculture (ECASARD) of which he was the national coordinator from 1995-2000. He later founded the Center for Indigenous Knowledge and Organizational Development (CIKOD) of which he is the current Executive Director. Bernard is also the Regional Co-coordinator of COMPAS Africa as well as a founding member and current Chairman of the Alliance for Food Sovereignty in Africa (AFSA) based in Nairobi. He is now a visiting lecturer at the COADY International Institute of the St Francis Xavier University in Canada where he teaches courses in Local and Indigenous Knowledge for Community-Driven Development and Community Led Natural Resources Management.

Bernard holds many publications of his field experiences and research work on the role of indigenous institutions in local governance, local economic development and natural resources. He is known internationally as a speaker and teacher on community driven development regarding issues such as food sovereignty, community protocols, traditional leadership and the protection of sacred groves facing threats from gold mining.