Mr Thymio Papayannis, Co-coordinator of the Delos Initiative and Father Gregorios, Representative of the Holy Community of Mt Athos, discuss the latest developments on integrated ecological and environmental management at Mt. Athos.
(Source: B. Verschuuren 2007.)

This Mt. Athos’ monastic community is perched on a mountainside ensuring solitude, quiet and isolation required for deep monastic and spiritual practices of the monks whom inhabit the monastery.
(Source: Bas Verschuuren 2007.)

This monastery is set against a backdrop of a hill covered in typical Mediterranean vegetation including Holm and Hungarian Oak forests that are not only ecologically important but also foresee in much needed building material and economic income for the monastic communities on Mt. Athos.

Site
Mt. Athos, named after its highest peak, is a peninsula on the eastern shore of the region of Central Macedonia, Greece. It is home to twenty largely self-sufficient monasteries, inspired by a variety of Eastern Orthodox Christian traditions that govern the site autonomously. Although dedicated to the Virgin Mary, women’s access to the peninsula has been effectively prohibited for over a millennium. Linking inner spiritual experience and exploration with the remoteness and solitude of the Mt Athos environment, resident monks have a long history of respectful maintenance of the local flora and fauna as well as the cultural heritage of the site. Its rich biodiversity as well as unique architecture were motivations to declare the site a UNESCO mixed World Heritage property for both nature and culture. Recent environmental and economic developments, however, call for a more integrated approach and stronger collaboration with various Greek authorities.

Ecology and Biodiversity
The steep slopes of Mt. Athos provide a diverse landscape with rapid succession of climatic and geographical conditions. Grazers are absent, allowing for the establishment of a dense forest of deciduous, coniferous and Mediterranean scrubland vegetation. Local flora includes 1453 taxa (of which 22 Greek endemics), providing a home for 131 bird species, 37 mammal species, 14 reptile species and 8 amphibians. Altogether, Mt. Athos is considered very rich in terms of biodiversity.

Threats
While harmony with nature has long been maintained, recently intensified road construction works threaten both the natural and cultural landscape. Wildfires menace the flora and fauna as well as the monasteries themselves. Local seismic activity further threatens constructions and architectural monuments, while the impact of climate change is likely to decrease water availability, expectably causing changes in the ecosystems.

Custodians
Mt. Athos monks have a long and well documented history with diverse backgrounds for the twenty Christian Orthodox monasteries. In A.D. 885 Byzantine Emperor Basil I declared Mt. Athos as a place restricted for monks and hermits. Collective prosperity lasted until the sixteenth and seventeenth centuries, when an economic crisis led the monks to adopt the idiorrhythmic system, where, in contrast to before, individual ownership was allowed. Impoverished but vital, Mt. Athos occupied a prominent position in the Greek enlightenment with the foundation of the Athonite Academy. The communities suffered during the world wars but a revival occurred with the entrance of more young, well-educated monks over the past forty years. Mt. Athos monks have always practiced forestry in traditional ways, for example by limiting timber trade, but recent economic developments have increased the pressure on the local ecosystems. Energy-wise the monastic communities are entirely self-sufficient. 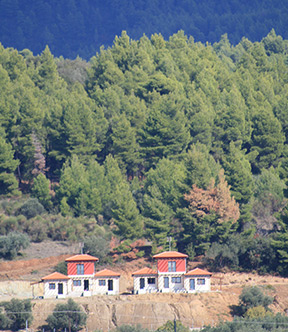 Access points are installed to control traffic at Mt. Athos. Most transportation is by foot or boat, only certain service vehicles are allowed. People visiting Mt. Athos require permission and appropriate documents before they may enter. (Source: B. Verschuuren 2007.)

Vision
Although most of the sites’ natural and cultural heritage remains well maintained, more systematic conservation measures and the adoption of an integrated approach could potentially enhance the richness of both. Careful monitoring of the impacts of changing natural threats will help adapt the ecology and the buildings at Mt. Athos for mitigation of climate impacts. Timber produced at the site would be more valuable and perhaps less harmful when subjected to a sustainable certification scheme.

Action
The Holy Community has engaged scientists to co-create further insight in local ecosystems’ threats, particularly under the light of road construction, fires and climate change. Recommendations resulting from the studies are actively followed. Separate monasteries proposed environmental management and timber extraction plans, well adapted to their situation. A management plan for the whole of the Peninsula is also under development by the Holy Community, in collaboration with the Ministry of Culture and the World Heritage Centre of UNESCO.

Policy and Law
In 1926, Decree 10/16.09.1926 on the ratification of the Constitutional Charter of Mt. Athos, together with article 105 paragraphs 1-3 of the Greek Constitution, recognized full responsibility of the Mt. Athos authorities for management of the area, according to a long tradition.

The Holy Community was, however, not consulted in the designation of the entire region of Mt. Athos as a Mixed World Heritage property for both nature and culture by UNESCO in September 1988, nor did it play a decisive role in the framing of the area as part of the Natura 2000 European Union network for its natural habitats and endemic birds. The Community acknowledges these declarations only within the historic and legal framework of the Athonite Peninsula.

Coalition
The Holy Community, governing issues that affect all monasteries, consists of representatives of all 20 local monasteries. Such matters include the opening of roads for vehicle access. Furthermore, each monastery has the legal responsibility for self-management. A state governor is responsible for security matters and compliance with Greek laws. To expand the knowledge of the mitigation of the potential threats, close collaboration is sought with scientific institutions and public services. In August 2013, an integrated study was presented together with the Greek Ministries of Culture and Environment and the World Heritage Centre.

Conservation Tools
With World Heritage advice and management planning under way, several case studies yield insights in the ways to conduct responsible management of the peninsula. A monitoring system helps divide the tasks and responsibilities among the communities and the monks. For the sustainable management of Holm Oak and Hungarian Oak forests, a demonstration area was planted, serving as a study area for Mediterranean Oak forests in general.

Results
The study ‘Rehabilitation of slopes along the forest road network in Mt. Athos’ (Dafis, 1999) was an important first result of the allegiance between monks and earth scientists. It was concluded that vegetation establishment had been successful on low height slopes, but that restorative interventions would benefit vegetation on slopes higher than 5 metres. It also recommended not felling any mature trees, even if close to a road. It featured guidelines for road construction while minimizing the impact, which have subsequently been followed with visible results. A second study (Dafis and Kakouros, 2006) yielded the recommendation that Holm Oak thinning reduces wildfire risk, and enhances species diversity. At the study sites, new, widely applicable ecological insights are gathered to date.