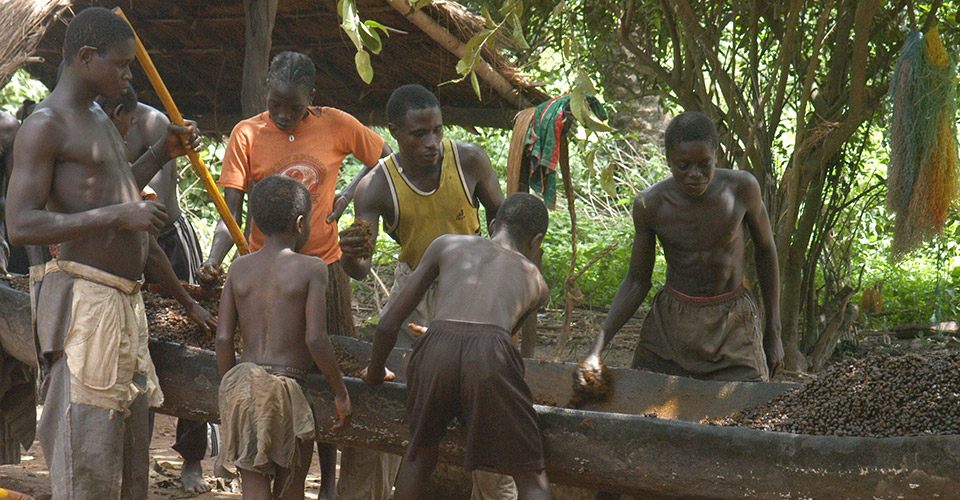 Communities in Bijagos produce palm oil for their households but its also mixed with red clay and applied as a skin paint when performing ceremony. (Photo: Lafiba) 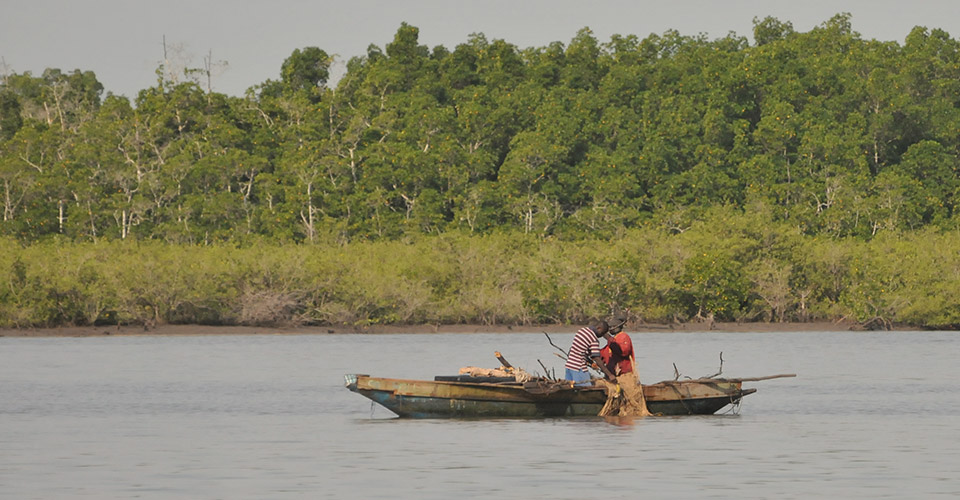 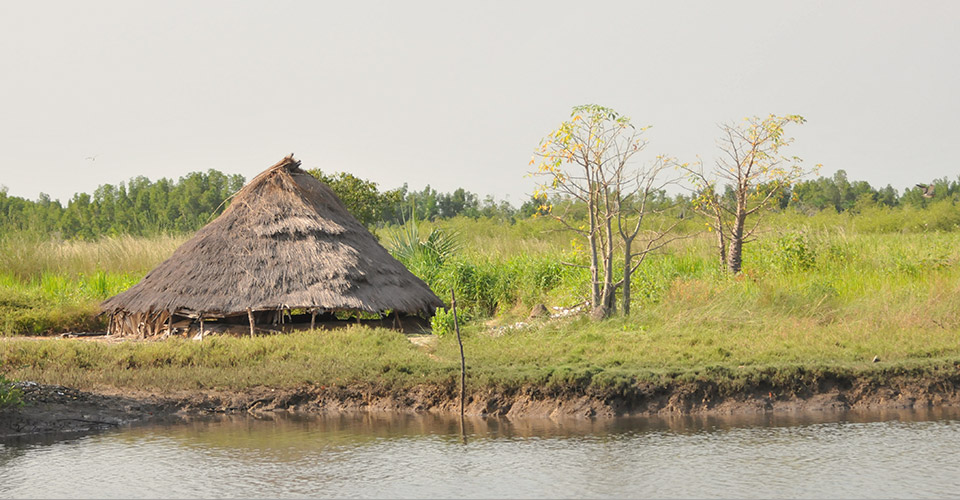 A traditional house on the water edge.
(Photo: Lafiba.)

Site
This study compares two sacred natural sites in the Republic of Guinea Bissau. The coastal territories of Bijante (Bijagos archipelago) and Colage on the mainland coast vary geographically but are similar in terms of culture. They are, for example, both protected by the traditional custodians. Both contain mangroves and tropical forests. Local societies are characterized by high solidarity between the individuals who have their own freedoms, but respect the collective religious rights and requirements. Initiation rituals taking place in sacred forests or surrounding natural areas mark the passing of young people into new age classes. While Colage lies in the Cacheu national park, Bijante is part of the Bolama-Bijagos biosphere reserve, not legally protected. 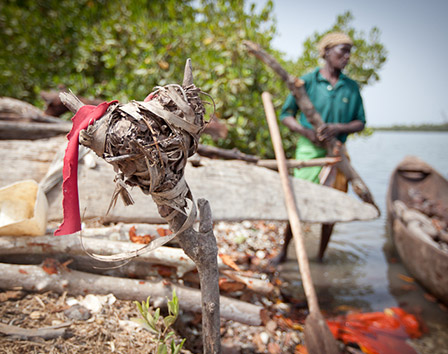 This fetish marks the border of a coastal or marine sacred site Kawawana. It is associated with taboos regarding access and resource use such as fishing, boating and in this case also the harvest of mangrove trees as you can see in the background.
(Photo: courtesey of Julien Semelin.)

Custodians
The local people of Colage are part of the Felupe, while the Bijante people are called Bijagos. Life in these areas is ruled by Elders following ancient habits and traditions. The most important social figures of the forest of Colage are the Amanhe (King) the Alamba (land owner), the Obiapulo (Master of ceremony) and the Kassetin (Medicine man). The high priestess takes care of the sacred fire and of the sacred house of the spirits. Together, they teach the younger generations during ceremonies. These communities are very tightly linked to their natural surroundings through their culture and religious beliefs. All community members start making offerings at sacred natural sites at a young age. King Oronhó rules the site of Bijante by carrying out religious, social and political tasks. He is subject to the local elder council. Besides several key figures being responsible for conserving sacred natural sites, the local belief is that the sacred woods conserve themselves. Some of them are only accessible by men, others just by women. These sites are governed through local myths and taboos about accessing or fishing in sacred natural sites. It is believed trespassing invokes sanctions of a mystical nature by the divinities.

Vision
Blanket recognition is being sought for all sacred natural sites in and outside protected areas. Empowerment of community action seems a logical step. Mapping unknown sacred natural sites could help placing them under juridical protection but it remains a challenge to specifically adjust current national laws to enable locally desirable conservation measures. For those sacred natural sites located in protected areas, management should ensure and support continuation of Sacred Natural Site oriented rituals with cultural or spiritual value as appropriate. 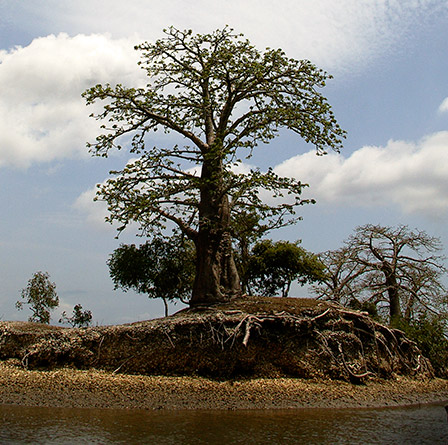 Amas Cocuillier Petit kassa: A sacred Baobab tree stands in the bend of a river. The baobab is a species of high cultural significance in Africa nut it also occurs in Australia. Baobab trees function as markers for meeting places but they are also important as places to communicated with the ancestors. (Photo: courtesey of Julien Semelin.)

Ecology and Biodiversity
The region consists mainly of savannas, arid and semi arid forests, mangroves and rice cultures. The sacred mangroves (Rhizospora sp.) and forests (Ceiba pentandra) in the region generally have a higher biodiversity than their surrounding sites, offering more edible and medicinal plants to the local communities. Animals in the region include the West African Manatee (Trichecus senegalensis), the Green Turtle (Chelonia mydas) and the Nile Crocodile (Crocodylus niloticus).

Threats
Sea level rise threatens coastal sacred lands in the region and climate change may destabilize ecosystems. More imminent, however is the threat of modernization. External groups promote the belief that these regions are backward and underdeveloped and interrupt the transmission local knowledge. Confused and forced by poverty, young local people migrate to urban areas and elders sell out to powerful stakeholders who convert their lands into cashew nut plantations or areas for tourism development. Intensive fishing by outside Senegalese and Guinean fishermen threatens the marine resources and reduces the availability of fish to the local communities. 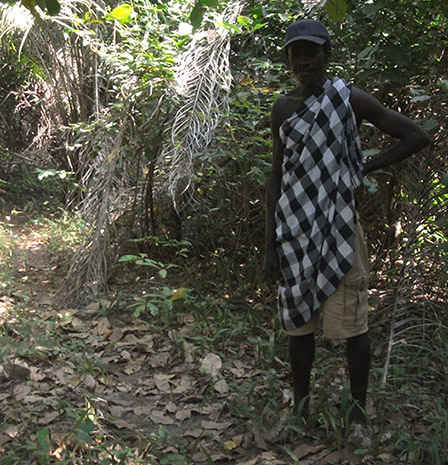 A custodian of "Colage" sacred natural site shows leads the way to the entrance of the grove where the site is located. Bijagóans are linked to the land through the rituals that follow them through life and death. Almost three quarters of all 88 islands in the archipelago are sacred areas for initiated members. (Photo: Lafiba.)

Coalition
The FIBA (Fondation Internationale du Banc d’Arguin) supports research in the area.  Both communities are situated within a larger territory officially managed by an administrator and a governor. In reality, however, the initiated community members of the region manage the sites by themselves, sometimes with financial support from the park or the biosphere reserve. The king, for example, marks the start of the agricultural seasons and the dates of the major ceremonies. Some environmental NGO’s are at work in the two regions, while the park facilitates schools and wells for the local population.

Action
Conservation efforts in the region have so far focussed on regulating fisheries and protecting biodiversity in general rather than on sacred natural sites. While local initiated people take the necessary steps to conserve the sacred forests, scientists and managers have created the firs maps together with custodians, indicating the locations of specific sacred natural sites such as Bijante and Colage. Scientists and NGOs have also raised awareness on the local problems and opportunities for sacred natural sites.

Conservation tools
The international tendency towards recognition of these sites offers a good opportunity for local acknowledgement of their importance. Participatory maps of the locations, the status and the threats of the sacred natural sites provide insight that enables policy makers to develop specific laws for the protection of such sites. Scientific studies also increase awareness to the persisting threats t0 sacred natural sites and help putting conservation of these sites on the political agenda of Guinea-Bissau.

Policy and Law
Bijante is located in the Bolama-Bijagos biosphere reserve, and Colage in the mangrove natural park of Cacheu river. Only Colage is lawfully protected. The Guinea-Bissau national act on protected areas recognizes sacred natural sites as sites for religious practice. If those sacred natural sites are located within protected areas, their natural state cannot be altered. Access is restricted according to local community regulations. The law on land tenure ensures that traditional residents have the right to access it. A recent forest law enables recognition of community forests managed by the local people under supervision of the DGFF (Direction Genérale des Forêts et Faune/ General directorate for Forests and wildlife) prevents their sale. Hunting is forbidden in the region and fishing is only allowed for locals.  So far, the legal tools remain ineffective given their inadequate enforcement and their weak integration into other sectorial policy measures.

Results
The preservation of sacred natural sites in their current state by local communities is important, but threats remain pertinent. Studies by FIBA support the first steps towards increasing awareness on the importance of sacred natural sites and the threats they face. Academic interest supports recognition of what would otherwise be thought of as savagery. New laws have emerged, but characteristics of the separate sacred natural sites should be specified for effective compliance. 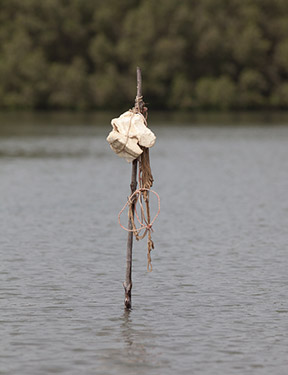 This fetish marks the border of a marine sacred site Kawawana. Sacred sites in marine areas are often associated with taboos regarding access and resource use such as fishing, boating and other activities.
(Photo: courtesey of Julien Semelin.)

A traditional male Bijago dancer takes part in ceremony. Man and women dance separate and specific dances that offer an enactment of a sacred or spiritual dimension of life. As animist beliefs remain strong in the archipelago they are not at risk but instead aspects of them also become incorporated into Christianity and Islam. (Photo: Lafiba.) 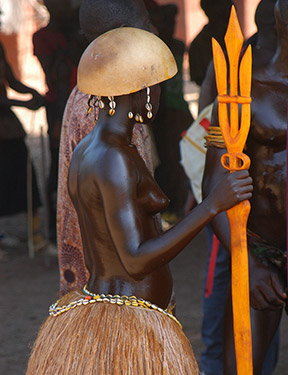 Bijagos Woman in Traditional ceremonial dress painted with a mixture of palm oil and red clay. In matriarchal Bijagos society woman have an elevated position over governance and decision making in the community. Because the Bijagos in an isolated archipelago many of their cultural traditions remain intact. (Photo: Lafiba.)