Sherpa (anonymous) place flaggs on the slopes of the sacred mountain for the protector deity Khumbu Yul-Lha during the annual Dumji ceremony. (Photo: Spoon J, June 2005.)

In the regions of Khumbu and Pharak, high up in the Nepalese Himalayas, lie the Sagaramatha (Mount Everest) National Park and Buffer Zone. The area is the home of the Tibetan Buddhist Sherpa since their migration in 1533.

The Sherpa inhabitants consider certain sites in Khumbu as sacred for different reasons.

Threats
Nepal’s average family income is amongst the lowest world wide, about 400 dollars per year. Since Nepal opened up its borders in 1951, tourist numbers have increased dramatically. This has caused changes in Sherpa spirituality, particularly for the younger generations. In addition, non-Sherpa Nepali labourers are increasingly participating in the tourism economy; however similar to the tourists, they do not have the same beliefs and respect for the local environment as the Buddhist Sherpa do.

Custodians
For the Sherpa, pre-Buddhist Bon shamanism and other spiritual traditions mixed with Nyingma Buddhism. They have many philosophical values that encourage more environmentally sustainable behaviour, such as taboos on cutting trees, polluting water sources and killing animals. They perceive most of their natural surroundings, both mountains and valleys, as sacred, and classify them as protected by different deities and spirits.

The entire valley, called Beyul, is sacred because the progenitor of Tibetan Buddhism, Padmasambhava or Guru Rinpoche set this valley and others aside for his followers in times of need. Inside these valleys, the inhabitants are restricted from killing or harming sentient beings from humans to animals to plants and instead are encouraged to practice principles of kindness and compassion. If these rules are followed, the beyul residents will be protected.

Mountains house protector deities (Yul-Lha) whose existence most likely pre-dates the arrival of Buddhism to Tibet. Today, these deities are bound by oath to re-emerge as protectors of Buddhism. They have associates in the form of wildlife, livestock and other mythical creatures, which remain unharmed by locals. Climbing these mountains is traditionally prohibited, and these deities must be pleased with gifts like aromatic incense and alcohol. Some forests, sacred trees, water sources and rocks are also seen as inhabited by site specific spirits, such as Lu, who may bestow wealth and long life to a family, but can also cause hardship, often in the form of physical ailments that can only be cured by a shaman. 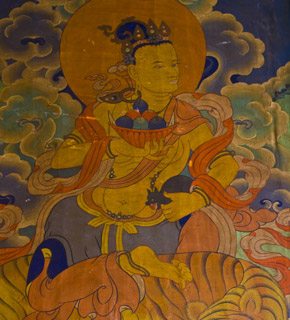 Jomo Miyo Lang Samba is the goddess that resides on Mount Everest. She is believed to provide wealth to the Sherpa people. Pangbuche Monestary, Nepal. (Photo: Spoon, J.)

Vision
A recent study suggests that working on and with the land perpetuated spiritual values while conducting business and not interacting with the land influenced their erosion. No clear vision has been formulated to counteract desecration, but looking at the current circumstances, such action may highly aid the preservation of the local inhabitants’ traditions and the physical environment.

Coalition
UNESCO and the Nepalese government are working on protection of the Sagarmatha National Park. They are supported by a team of civilian park rangers, game scouts, administrative staff and the Nepalese Army, who enforce management. Also assisting are three Buffer Zone Management Committees that consists of representatives elected by User Groups from each administrative district within the National Park and Buffer Zone. These Committees have the power to enact development and conservation projects in their area using a portion of Park entrance fees, which are returned to local residents. Various non-governmental organizations (NGOs) also collaborate with the Park and local residents on conservation and re-vegetation programs.

Action
Sagarmatha National Park was demarcated as a protected area in 1976. It was selected as a UNESCO world heritage site in 1979. With assistance of New Zealand Government, the protected area became one of the first national parks in Nepal where indigenous settlements and resource use was recognized, and opportunities were developed for local inhabitants to develop their properties for tourist enterprises. The National Park was expanded in 2002 with the inclusion of the Pharak region to the south of Khumbu as part of the National Park Buffer Zone.
Conservation tools
The Park’s first Management Plan lacked any mention of Sherpa spiritual values or restrictions tourism development. In 2007, a new plan was ratified that places stronger emphasis on the integration of local spiritual values and practices into management. It also empowers the Sherpa to take a stronger role in resource management and has multiple regulations on tourism development.
Results
The paradigmatic change from close interrelationship with nature to a more divided view of the human-nature relationship seems to open the way for less environmentally sustainable decision-making in the area. Tourist visits keep increasing; in order to preserve the positive environmental impact that these traditions contained for centuries, more action is needed. 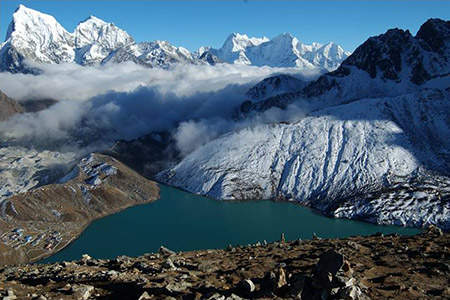 Sangaramata contains Beyul or sacred valleys that are under threat of the collapse of glacial lakes under the influence of global warming. Sangaramata, Mt Everest National Park, Nepal. (Photo: Spoon, J.) 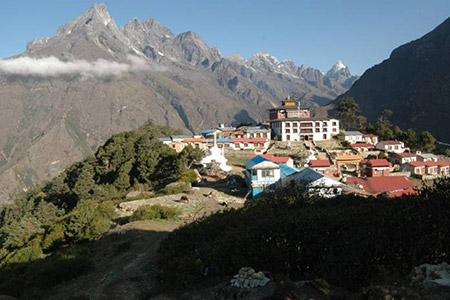 Tengbuche Tibetan Budhist Monestary is perced on a mountain inhabited by Kumbu Yul Lha. These are pre- Buddhist protector deities bound by oath to re-emerge as protectors of Buddhism. They have associates in the form of wildlife, livestock and other mythical creatures on the Mountain. Nepal. (Photo: Spoon, J.)