Land evaluation for conservation of natural sites with spiritual values in Neyshabur, Iran 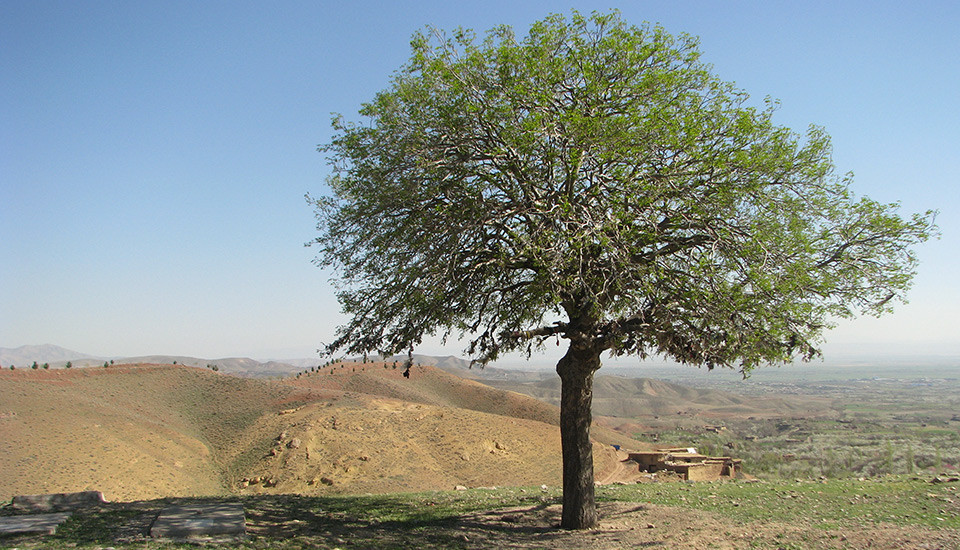 Tapeh-e- Hajghareh - Hajghareh hill - and Derakht-e- Arezoo - wish tree- at Kharv, part of Neyshabur township in Khorasan Razavi province in Iran. People protect the hill and tree. It is believed that once a pious person fled her enemies and as she ran the hill it cracked open and swallowed her. Local people tie pieces of cloth to tree as they believe that their wishes will be met by the tree.
(Source: Maryam Kabiri Hendi , 2011.) 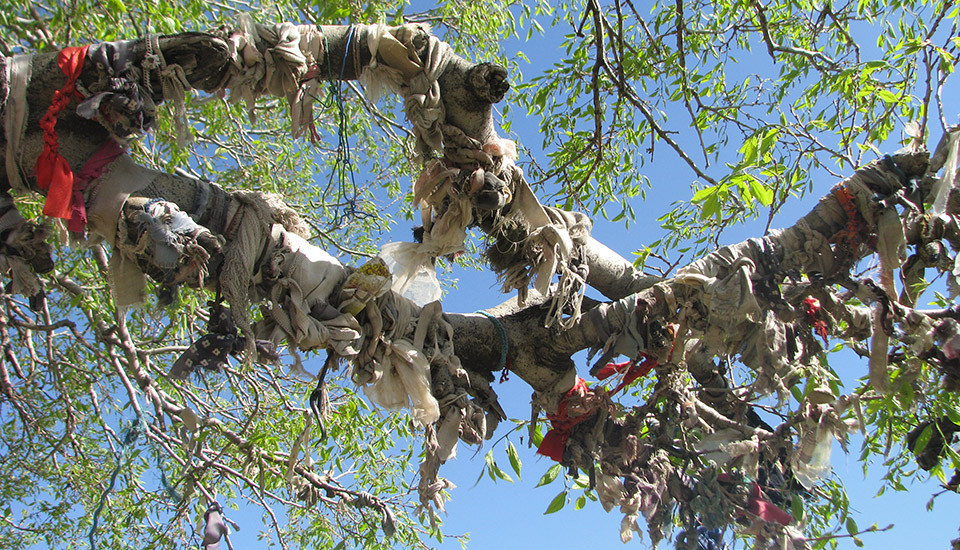 Derakht-e- Arezoo - wish tree - at Kharv, part of Neyshabur township in Khorasan Razavi province in Iran. People protect the tree. It is believed that once a pious person fled her enemies and as she ran the hill it cracked open and swallowed her. Local people tie pieces of cloth to tree as they believe that their wishes will be met by the tree.
(Source: Maryam Kabiri Hendi , 2011.) 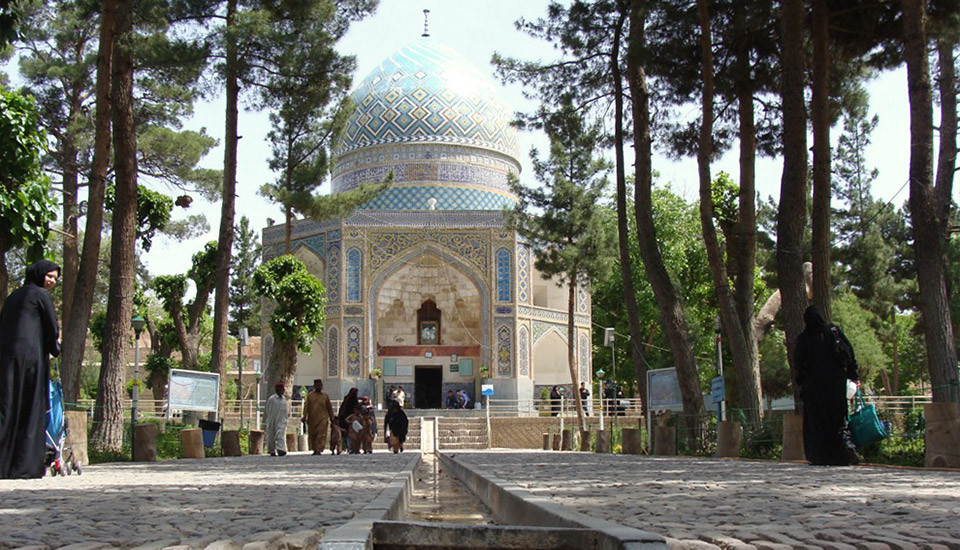 Qadamgah Garden in Neyshabur township at Khorasan Razavi province in Iran attrackts many pilgrims that follow the footsteps of the 8th Imam of Shiites, a male spiritual leader thought to be a descendant of Muhammed, divinely appointed to guide humans. The word Qadamgah means footprint and refers to this narration.
(Source: Maryam Kabiri Hendi, 2011.)
Site
Neyshabur is a township in North East Iran. A large part of it is located in a vast plain surrounded by hills and mountains. There are different sacred natural sites in the township, ranging from sacred trees and sacred springs to a sacred boulder and sacred gardens. The area houses several endemic plant and animal species. It also contains protected areas and ecotourist destinations such as waterfalls, springs, rivers and eye catching geographical features like mountain summits. The climate is semi arid to dry with an average annual rainfall of 300 mm.
Threats
In spite of the fact that these sites are protected by local communities, their future is threatened by urbanisation, population growth, infrastructure development and tourism.
Status
Protected

Custodians
Local people respect natural features as they are rooted in their religious belief. Qadamgah in Neyshabur for instance, is a Persian garden where nature has been imbued with spiritual values. It contains a mansion, trees, pools and streams. One of the walls of the mansion contains a black stone on which two footprints have been carved. People believe these prints belong to the 8th Imam of Shiites, a male spiritual leader thought to be a descendant of Muhammed, divinely appointed to guide humans. The word Qadamgah means footprint and refers to this narration. 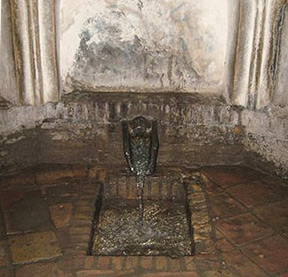 Qadamgah’s history as a sacred site dates back to the pre-Islamic period. Though its original purpose is unknown, it is historically linked to the Sassanid prince Shahpour Kasra, as well as to Imam Ali and Imam Reza. Word goes that in 921 AD Imam Reza stopped at the garden on his way from Medina to Marv. The instant he wanted to perform his ablutions, a spring welled out of the earth. The spring has been regarded sacred ever since and people believe this water has healing properties.

Some plane trees (Plantanus sp.) have been actively conserved for centuries. Plane trees in Iran have been regarded as sacred for a long time because of the shade they offer, their largeness and their green appearance. All over Iran some plane trees have been kept alive for centuries. Legends and beliefs about some specimens have caused people to stay away from them. A long lived plane tree in a village of Neyshabur, for example, is conserved by local people because they believe that a man once lost his family due to the breaking of its branches.

Local people still conserve lesser-known sacred sites which have no legal protection. Values of such sites are taught to the younger generations and religious ceremonies and practices are performed communally, as they have been for centuries. This way, the next generation learns to protect them.

Vision
Although there is formal management strategy, people tend to protect their sites. Some implement short term measures at a local level. Among a wide variety of plans that are carried out for example, a park has been established around a wish tree and tourist services have been developed there.

There is also a national plan for inventory and conservation of long lived trees under supervision of the Forests, Range and Watershed Management Organization of Iran. Recent research by Maryam Kabiri draws the attention to the significance of the spiritual values that these and other sacred sites have in relation to nature conservation.

Policy and Law
The Iran legislation has no mention of sacred natural sites so far. Some sacred natural sites have been officially conserved because they are located in protected areas or in a national monument. Others have been specifically registered as national natural monuments. The Cultural Heritage and the department of the environment authority have a say in the protection of national natural monument. They advocate mainly for rare flora and fauna or remarkable land formations, landscapes or even ancient trees. They are then brought under protection by designating a suitable perimeter.

Coalition
Some sacred sites in the area are under supervision of Endowments and Charity organizations (responsible for endowments and sacred places such as mosques and shrines) and a trustee board of local people. The Cultural Heritage, Handicrafts and Tourism Organization is responsible for registration and management of historical monuments and national natural monuments.

Qadamgah, for example, has been registered in this way, but it is also under supervision of endowments and charity organization of Iran and of the local trustee board.  As in the case of Qadamgah, when a site has both cultural and spiritual values these organisations cooperate in the conservation and management of the site.

Conservation tools
Criteria for conservation have been set up and these criteria have led to maps of areas in the township of Neyshabur which are in need of prioritized conservation. Some recommendations have additionally been formulated in this thesis, which may help with the initial steps for planning political agenda and developing criteria and indices of a national natural monument such that takes spiritual values into account.

Results
Sacred natural sites as a part of bio cultural diversity have been protected for centuries by local beliefs and values. Nowadays these sites are threatened for different reasons. If they are to survive, current measures need to be supported by legal protection. For this purpose, taking an integrated approach based on joint criteria and policies in the fields of nature and culture can play a key role in the conservation of sacred natural sites. Kabiri Hendi (2011) identified such criteria for the conservation of sacred natural sites in the township of Neyshabur.