Source: Wiki Images
Site
Mt. Kawagebo is one of the most respected holy mountains and represents an important culture of Southern Tibet. Kawa means white and gebo means mountain in the local Tibetan language. The Kawagebo mountains have complex climatic, geological and ecological conditions: from the lowest river valley to the highest peak there’s a height difference of 4900 m, which creates distinguished climatic belts: subtropical hot-dry river valleys, temporal mountains, boreal mountains and ice sheets. The vegetation types range from dry shrubs, subtropical mountain forests, Boreal forests, Alpine grasslands to highland tundra. While most of Mt. Kawagebo, is designated as a protected area, the Western part, covering part of the Chayu Prefecture of Tibet, is not included in the National Park due to its hot-dry climate and sparse vegetation coverage.

Mt. Kawagebo was originally regarded by the Tibetans as the house of Tsan, a powerful deity. With the arrival of the Buddhists in the region around the 8th century, the deity changed into a protector of Buddhism, and was renamed into Kawagebo. Over the centuries, pilgrim paths were established, which today include different sacred natural places such as sacred water bodies (fountains, lakes and waterfalls) and sacred rocks (stones, cliffs, caves). The pilgrimage paths connects sacred places that imbue a whole landscape with a meaning of the sacredness. Such places include monasteries where eminent monks undergo spiritual cultivation.

Status - threatened.
Custodians
Local Tibetan villagers living around the pilgrim circle regard the mountain as their protector and they have a series of traditional natural resource management methods such as ri-rgya, the community holy mountain and taboo area, where hunting and logging are strictly prohibited. In the ri-rgyaa, the collection of non-timber forest products, limited herding and other activities may be allowed. ri-rgya, allow the sustainable utilization of community’s resources, protection of water resources, and prevention of mountain slope erosion, water and soil loss. Rituals and offerings are done by the male family members in the region: in the early morning of the 5th, 10th, 15th and 30th of the month. The length of the ritual and the amount of offerings vary, peaking for example on the first day of the new year.

Policy and Law:
Mt. Kawagebo is governed within the framework of national policy. Designated protected areas are located nearby where governance may benefit the ecological conditions of Mt. kawagebo.

The traditional governance of the ri-rgya is one of the most important religious practices to the local Tibetan community. There are agreements between different villages and families to guarantee the regeneration of timber and medicinal plants, as well as limited use of non renewable resources such as rock and minerals.

Results
Through the cultural and environmental projects of KCC, local people increasingly understand the importance of their own culture and natural environment. There is more cultural confidence among local villagers as well as increased community integrity. Collaboration with other groups and organisations is improved, and research on the taboo mountains and forests (ri-rgya) is building a bridge between local knowledge and national governance as well as international research.

Vision
The vision of the local Tibetan is not explicit but resides in their spiritual tradition. Mt. Kawagebo as a sacred mountain is the core of local people’s beliefs. Therefore the  aim is to conserve the physical, cultural and spiritual status of Mt. Kawagebo and stop direct or indirect destruction on the mountain body and their culture.

Coalition
The Kawagebo Culture Club (KCC) wants to promote Tibetan folk culture and protect the local ecological and culture environment, but they also try to promote the traditional culture and concept of nature conservation to local Tibetans. KCC, Registered in 1999 in Deqin, capital of Diqing Tibetan Autonomy in Yunnan, is a non-profit organization founded by Silang, a Tibetan Chief Liberian of Deqin and artist. This organization focuses on promoting Tibetan culture by giving free language and music instrument courses and gradually enter into environmental protection area.

The local villagers are aided by international organizations like The Nature Conservancy, Conservation International and PCD. The Deqin government and volunteers from other places also offer substantial support.

Action
Since 2003, the Kawagebo Culture Club performs different actions to raise the awareness of the local problems and their solutions. Examples are incentives against overharvesting, joint research projects, garbage cleaning projects and protection of local animal plant and animal species.

The villagers are organizing an agreement around the villages of Mt. Kawagebo pilgrim circle, to clarify their position against mining in the region. Despite opposition from forces in business and government, villagers are on guard to face future uncertainties regarding their sacred places and natural resources. 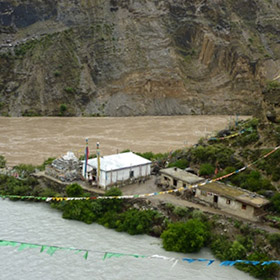 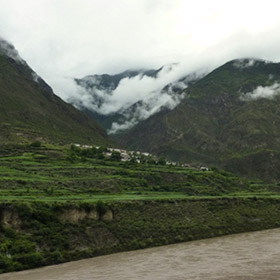 Longpu to the North of Abin, another village to be relocated. 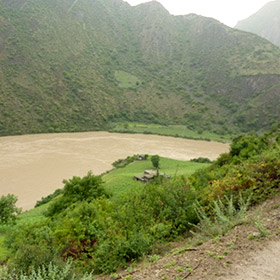