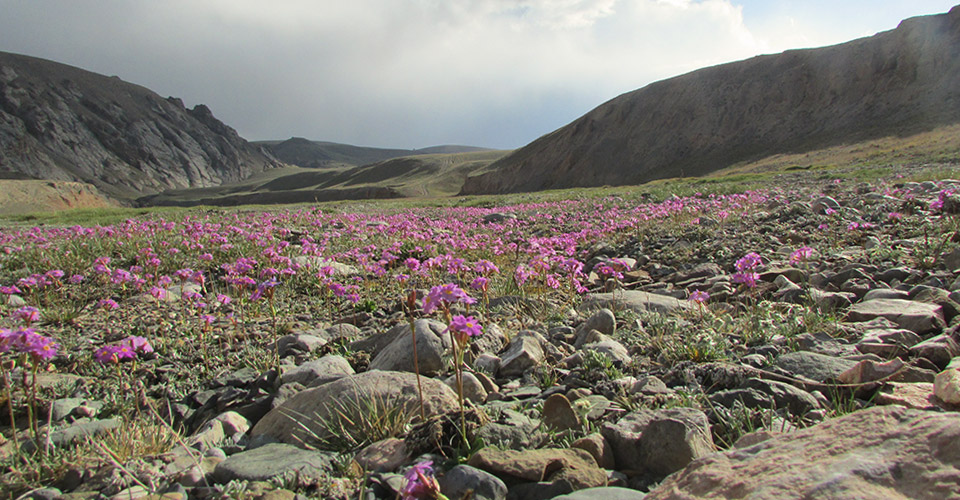 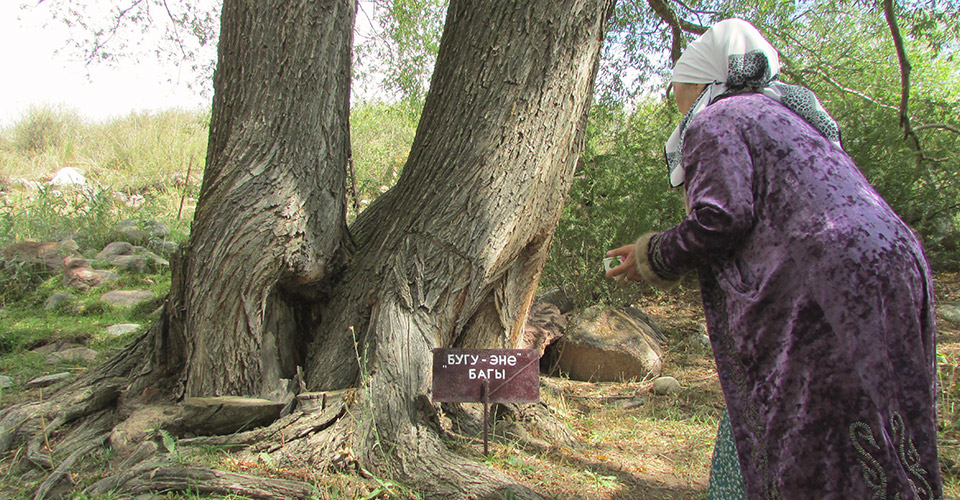 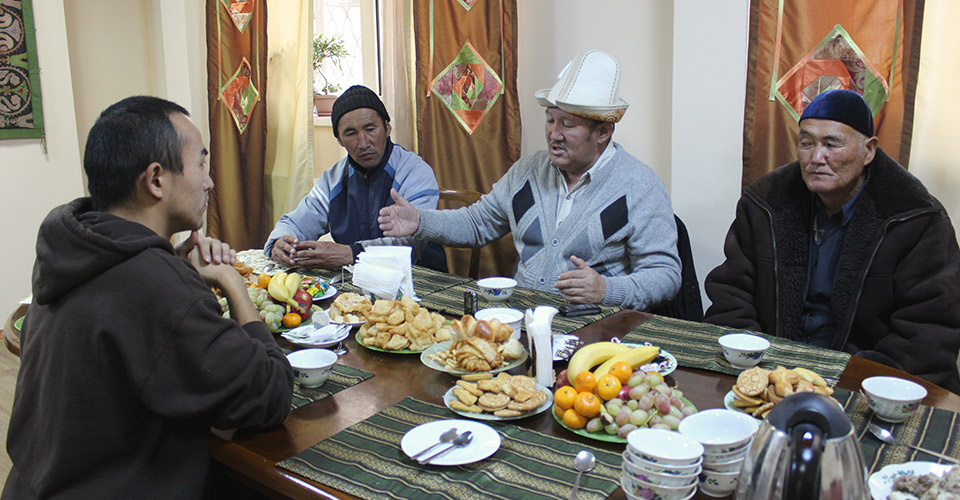 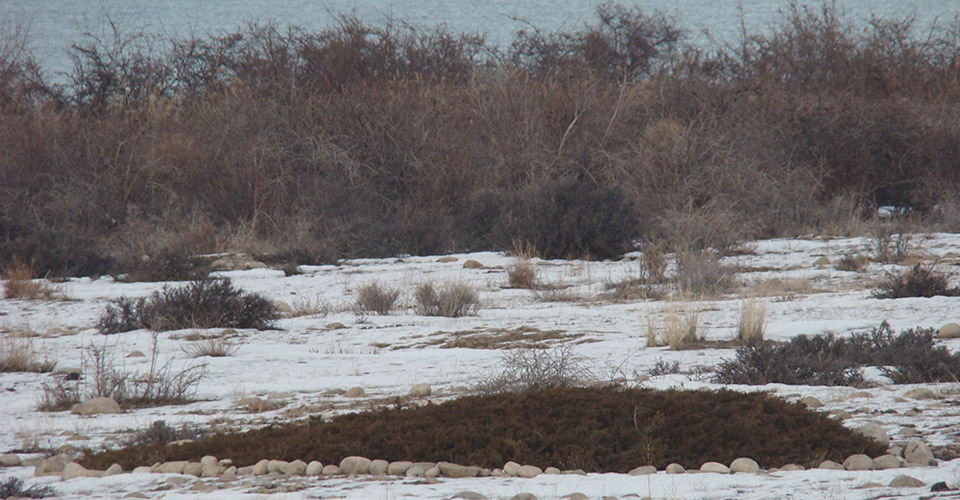 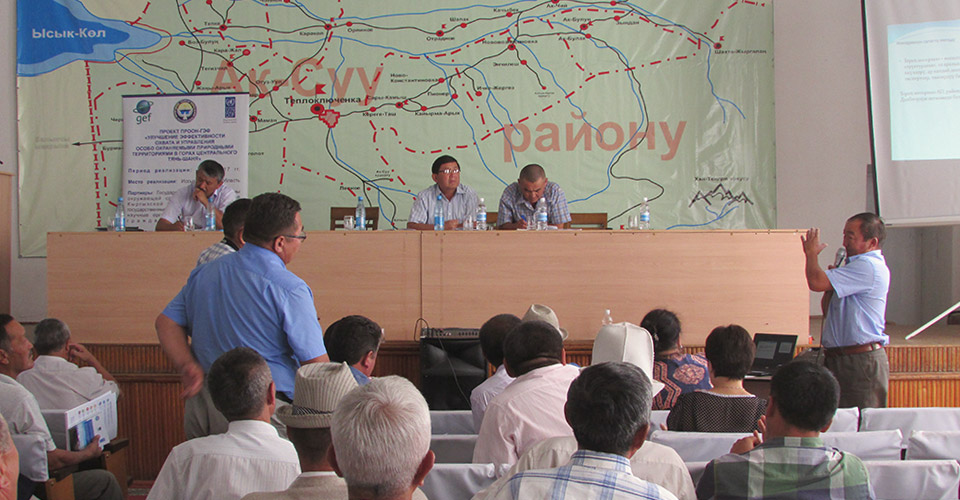 Meeting of officials and locals. 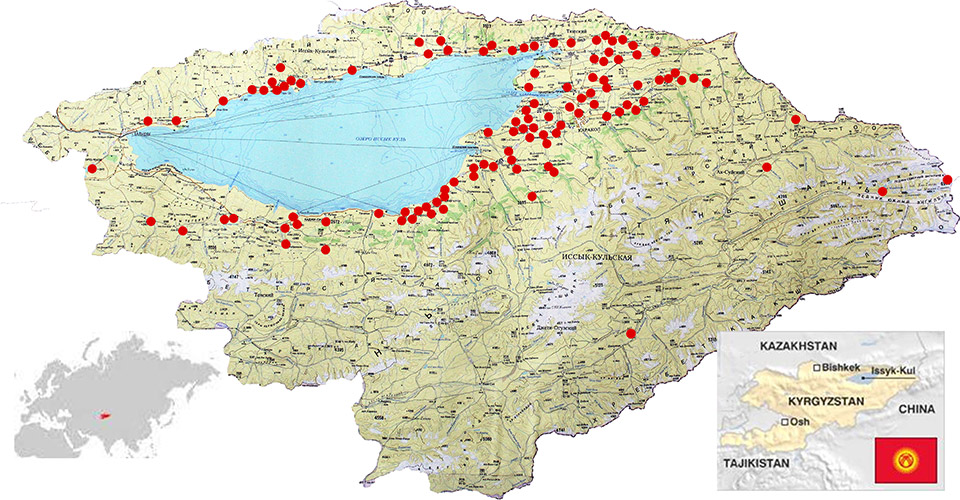 Site
The highlands of the Issyk Kul province in the north east of Kyrgyzstan contain one of the largest elevated water basins in the world. Because of its shape seen from the hilltops, local people believe it is the spiritual ‘third eye’ of the earth. As a Biosphere Reserve, it is under protection of the national government, while local inhabitants take care of over 130 sacred sites in the region. Locally guarded sacred natural sites can be individual trees, mountain peaks, waters and other elements in the landscape. Objectives and methods of scientific conservation and local conservation are not always consistent, and in the present situation trust between communities and managers is a challenge.

Status: The reserve has protected threatened and endangered areas.

Threats
Local villagers perceive mining and sewage pollution of the lake as important threats. Following an ancient lore, some expect that both pollution and privatization of the lake coast may result in spiritual catastrophe. According to local beliefs, if communities mistreat their environments, the nature it will take revenge. Poaching and biodiversity loss are additional threats being addressed by GOs and NGOs as well as by sacred site custodians themselves.

Working together
The Biosphere Reserve houses many conservation actors, some of them formally, others doing their work in an informal way. A study by the University of Manitoba, supported by the Community Conservation Research Network suggests that traditional conservationists and efforts of external parties barely interact, and that these groups are often unaware of each other’s visions and activities. This is expressed, for example, in villagers believing that the Biosphere employees are good at collecting money, but bad at stopping poachers. There are some local exceptions, where government agencies, NGO’s and communities work together on a single project.

Ecology & Biodiversity
Lake Issyk Kul is a high altitude freshwater basin situated in an arid region. It functions as a spring to diverse life forms including alpine and subalpine meadows, high mountain tundra, riverine ecosystems, fish and a number of mammals such as the threatened Marco Polo sheep (Ovis ammon polii), the Siberian ibex (Capra sibirica) and the emblemic Snow Leopard (Uncia uncial). Some of the species in the reserve are in the IUCN Red List.

Nature of sacred sites and their custodians
Sacred natural sites each have important meanings for the local people in Issyk Kul. In their society, particularly valued elements are trees that are found on unexpected locations such as in the semi-dry environment. Or perceived sacred natural sites are certain springs, geological formations and entire ecosystems such as Issyk Kul Lake itself. When a person has a livelihood need (children, health or spiritual well-being), he or she visits a specific sacred site. Lore teaches that the degree of success of a pilgrim depends on his ability to connect with the sacredness of a site. The sacred natural sites around the Issyk Kul Lake have their own self-appointed and community-approved guardians. In some cases, local spiritual practitioners get dream messages from sacred natural sites, which they believe help them cure people who get ill. Communities also believe in spiritual punishments such as illnesses for people who damage these sites.

Vision
Objectives of formal conservation and community-based sacred sites can be consistent. Hence, one vision for the region is that trust building among the parties involved would benefit conservation as a whole. Formal conservation by GOs and NGOs would be more effective if they used the traditional ecological knowledge of the local communities; in turn, communities might benefit from the organizational capacities of GOs and NGOs. The researchers recommend a bottom-up, sacred site-centred, and biocultural approach, where community members, guardians and park managers get to know each other and teach each other their expertise and share visions.

"I saw an aian (dream) in which a sacred site was calling for me. It said that it was being polluted and neglected. I woke up in the morning and set off to look for that site. I did not know where it is located. I knew what it looked like as I saw it in the dream. I travelled through a dozen of villages but could not find it. At last, after asking local villagers I found a big willow tree. It turned out that sewage ditch from one house was bringing dirty water to it. I cleaned it up and told to the members of that household that they need to divert the ditch. They agreed to do so but apparently they did not divert it. A month later the mother of the family got paralyzed and the husband came to me asking to heal her. I said that I could not and that they should divert the ditch away from a sacred site. After that they did so and the woman recovered"

Action
So far, there has been no coordinated action aiming to bring the formal and community-based conservation approaches closer together. Small, local projects can be used as learning tools in an adaptive management sense. The current research could be considered a step in raising the awareness of the potential benefits of closer collaboration and willingness to unite qualities.

Policy and Law
The Biosphere Reserve operates under formal laws and regulations. Sacred sites are subject to customary law. There is a body of national level laws and regulations pertaining to Biosphere Reserves, protected areas and national parks, pollution and biodiversity conservation. Sanctions for the violation of formal laws are reflected in the Code of Administrative and Criminal Codes. Violations of customary laws related to sacred sites are believed to lead to negative consequences for the violators such as illness, misfortune or even death.

Results
The results of the study suggest that sacred sites may contribute to formal conservation by making conservation more meaningful to local communities. Integration of traditional knowledge, values and beliefs related to sacred sites with the conservation plans can make conservation goals more comprehensible to locals. Recognition of sacred sites can also help foster a biocultural approach to conservation in the Biosphere Reserve. The studies find that current conservation strategies mostly focus on biodiversity and overlook cultural diversity even if the Biosphere Reserve’s statutory goals and mandate is broader than only nature conservation, emphasizing the inseparable interconnection between social and ecological systems. Therefore, bringing cultural conservation and traditional knowledge into would contribute to meeting Biosphere Reserve’s goals and mission. The results of the University of Manitoba research are consistent with findings of Aigine Cultural Research Centre, which conducted the study in sacred sites throughout the country. Hence, these recommendations are likely to be applicable also to other protected areas in Kyrgyzstan.

"Mountains are up high. Being on elevated places, one gets pure thoughts. Only few people (such as herders or geologists) actually go high into the mountains, there are no idle people. I think that sacredness is best preserved in places where only few people set foot on." - Traditional Practitioner.