Preserving nature and culture with animistic ecotourism in Cambodia. 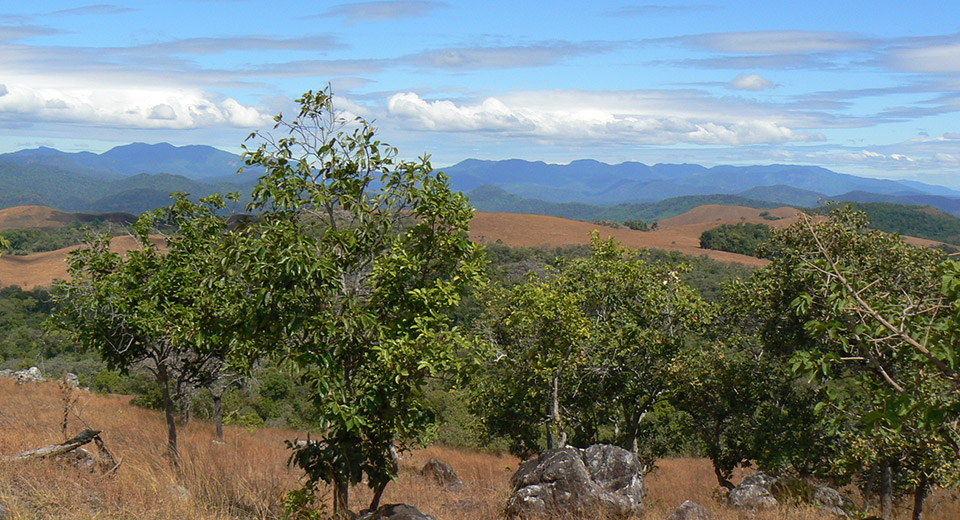 Krang Mountain in the Veal Thom Grasslands of Virachey National Park: the Brao people believe the spirits of this mountain have the power to bring rain during times of drought and free prisoners from jail. 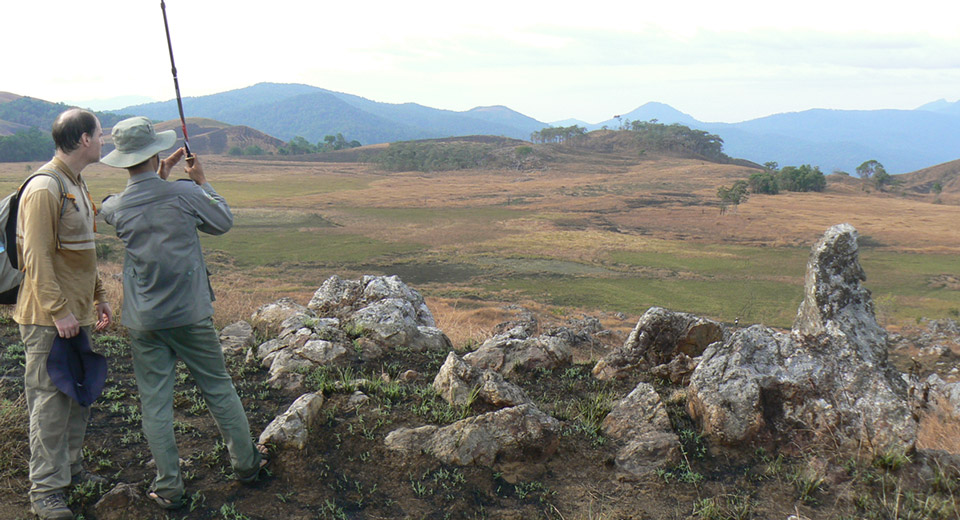 A VNP ranger explains the spiritual topography of the barrier mountains that separate Cambodia in Laos in VNP.

Site Description
The mountainous Virachey National Park (VNP) is Cambodia’s largest protected area. Located in the Stung Treng and Ratanakiri provinces in the extreme northeast of the country, it is home to rare flora and fauna. Numerous groups of highlander tribes traditionally inhabit the park’s buffer zone, such as the Brao, Kreung, and Kavet. They are legally allowed to fish, hunt non-threatened species such as wild pigs, and collect non-timber forest products within the park’s boundaries. They consider the largest mountains "Spirit Mountains". These and other sacred natural sites are surrounded by a rich animist folklore the details of which vary between villages and tribes. 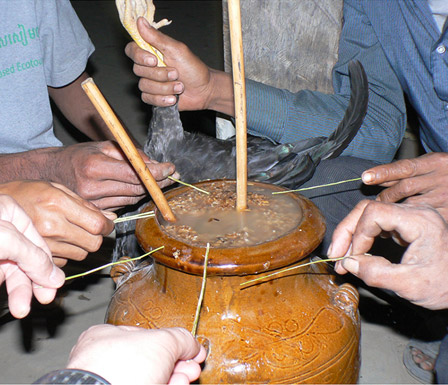 Praying to the spirits of Mera Mountain before a trek to that sacred place. Drinking rice wine is central to village life. A chicken was sacrificed to help appease the spirits. 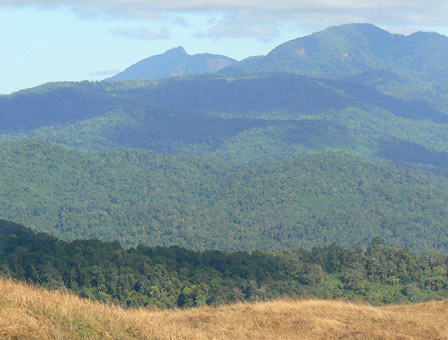 Haling-Halang: the most powerful spirit mountain in Ratanakiri.

Threats
The main threats to the local ecosystems are rapid deforestation and land- appropriation due to the government’s policy of selling Economic Land Concessions, used as rubber and cashew plantations. The expansion of such concessions is fast and it aggressively tears through the remainders of Cambodia’s wild places and animist cultures. Likewise, hydropower development in the region, destined for urban regions reduces rivers to stagnant pools of contaminated water. Related to this is the trend that young inhabitants of the region forget ancient traditions, tempted to adopt modern life styles. In fact, some seem to shun their animist heritage altogether.

Custodians
Mountains are considered the abode of powerful deities who can bring rain in times of drought, heal ill family members, and even spring incarcerated people from prison. The Brao people, resident in the buffer zone, are fearful of the Spirit Mountains of Virachey. They are particularly nervous about Haling-Halang, which sometimes demands human sacrifice in exchange for favours. No hunting or logging is allowed on Haling-Halang. Visitors to certain sites must make prayers to the resident spirits. Those who wish to collect this bamboo must consult with a local “magic man” who will get in touch with the spirits to find out exactly how much bamboo can be taken, and which sacrifice will be needed. The story goes that a young Brao man once cut a Haling-Halang bamboo without consulting a “magic man”. While cutting, a sharp piece of bamboo pierced his leg. The injury nearly killed him. These animist ways, illustrative also for different sites, indirectly result in wildlife protection.

Do Yok, a Tampuan, relating the story of a large tree stump near the sacred Yeak Lom Lake on the outskirts of Ban Lung:

“Do you see the cut tree there? That was done by minority people. This angered the spirits at the sacred lake, who then killed several people from the minority village where the loggers came from, and all the people from the village had to move out of the area. Even now, minority languages cannot be spoken in the park, or the people who speak it will fall ill and die very quickly.”

Do Yok informed me that the Tampuan villagers who felled the tree did so at the urging of Vietnamese buyers –distant forces who do not live in nor understand this particular bioregion who nonetheless have a serious negative impact on it.

Vision
There is still time to save the parks cultural and natural heritage. The area would be benefitted with the establishment of a coalition of communities in the buffer zone who earn money as tour guides, hosts, agriculturalists, fishermen, and other contemporary professions, without abandoning their animist heritage. Intercultural transmission from the elders to the younger generation needs encouragement, reinforced by transmission across tribes. Young people can drive scooters, talk on cell phones, work in town, and also be proud of their rich animist heritage.

Action
Grassroots efforts are underway. A camera-trapping project on Haling-Halang aims to verify the presence of critically endangered species in the park and to involve indigenous people, Park rangers, NGO workers, and tour operators in a coordinated effort to protect the sacred mountains. Storytelling sessions and trekkings to sacred mountains educate tourists as well as young local people, enabling them to learn the remaining animist legends. Ethnographic interviewing generates insight into the situation, also helping to raise global awareness about the value of these lands.

Policy and Law
Indigenous people are legally allowed to fish, collect non-timber forest products, and hunt non-threatened species such as wild pig and jungle fowl. They did not traditionally hunt protected species such Pangolin but with high-paying markets in Vietnam, the temptation to earn money is now too great for some. The park has been well protected between 2004 and 2008, when sponsorship of the World Bank enabled execution protective laws. Sponsorship was cancelled when the Cambodian government announced allowance to explore the park for valuable minerals. It has resulted in extensive logging, poaching, and encroachment. Roughly one third of the park is now business property. A temporary moratorium is currently in place.

Working together
So far, collaboration between different parties in this area is poor. Even among villages, the social fabric is beginning to fray as land is sold or illicitly signed over to outsiders. The Cambodian government is listed among the most corrupt in the world. There is nevertheless involvement of the NGO Habitat ID, and several universities do work in the region. This offers hope, but a lot of work remains to be done.

Conservation tools
To conserve nature in this area means to reinforce the traditional nature friendly ways of life. “Animistic Ecotourism” is the central concept encompassing these efforts, including storytelling sessions and trekking tours. Furthermore, research and documentation of the traditions and the important natural features in the park enables outsiders such as policy makers to become aware of its remaining value. Cultural documentation is currently done with ethnographic interviews. Motion-triggered camera-trapping on sacred mountains will soon be initiated in order to verify claims about the natural values of the area, such as the continued existence of rare and locally extinct species.

Results
Next to numerous academic publications that have been written about the region, efforts have established an expansive and reliable network of informants and translators who have visited many villages in the VNP buffer zone, and are now quite knowledgeable on the traditions. They could be the next important advocates for the rights of the region, when it comes to convincing key stakeholders. In the near future, Habitat ID will print a book containing myths and legends of the spirits in the region. This will be dispersed through the region’s villages. Finally, a volunteer camera trap project is about to dawn as a result of long effort.