Protecting and reviving the Sacred Forest Hill in Paluküla, Estonia. 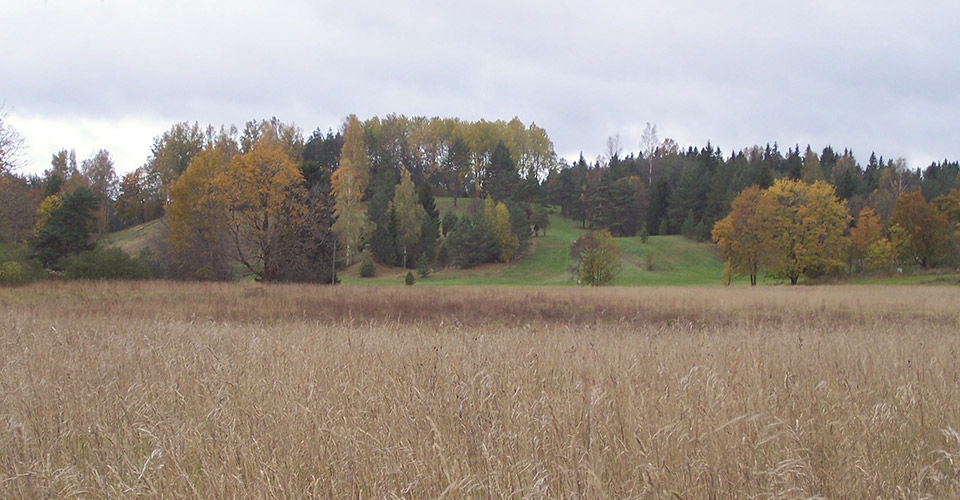 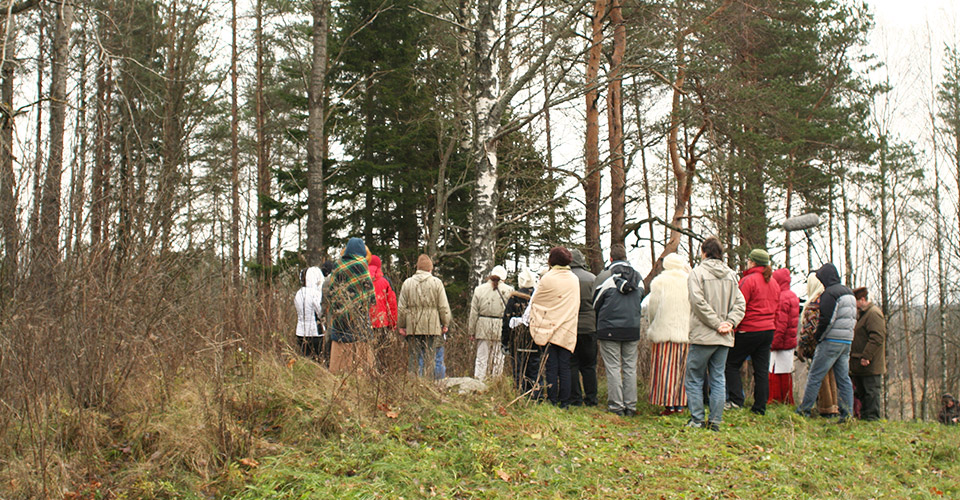 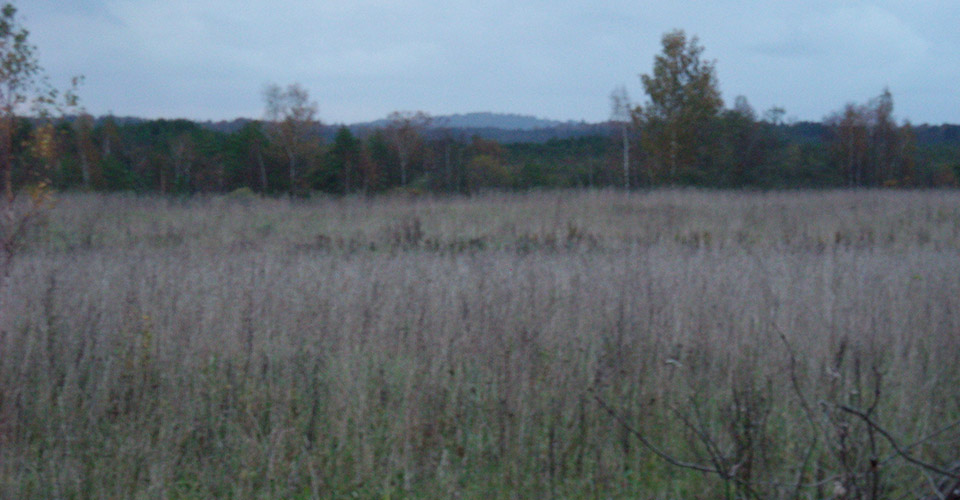 Site
Before the conquering and Christianisation of Estonia by Germans and Danes during the Livonian Crusade in the 13th century, all local villages shared sacred natural sites. Many local villages date from these times and their companioning sacred natural sites form a pattern in the landscape. In the Paluküla village area in Central Estonia lays a Sacred Forest Hill called Hiiemägi (“hiis-hill”). Numerous local people still follow the Maausk, meaning they worship nature as a divinity. They offer the first harvest of the year to the ancestors who are associated with Hiiemägi and the trees. They also celebrate Midsummer Day at this site. According to tradition, its trees are not to be cut and the hill cannot be ploughed or otherwise disturbed. 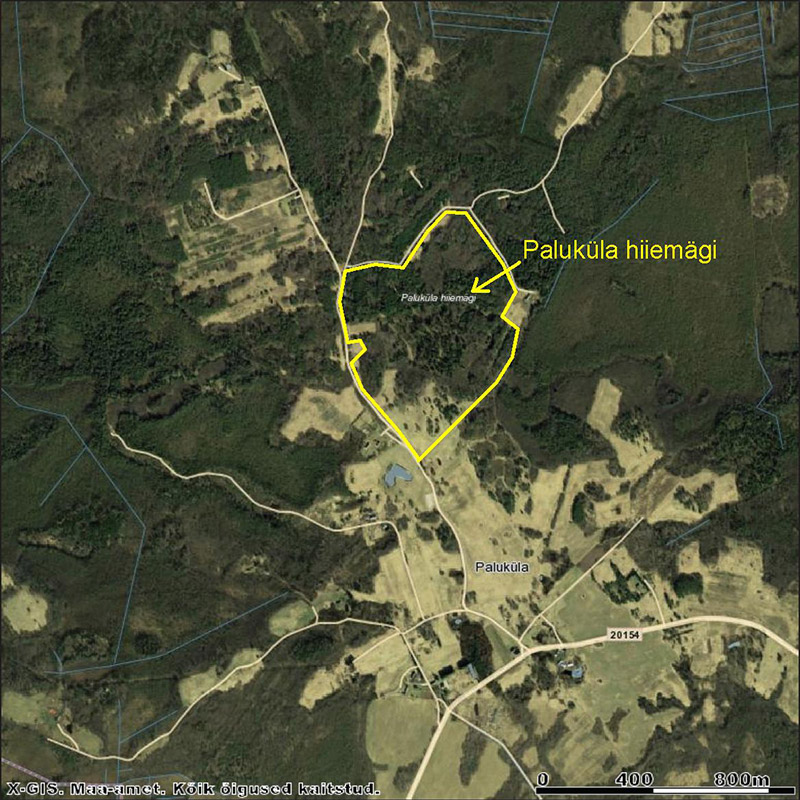 Location of Sacred Forest Hill in Paluküla (Paluküla hiiemägi) in relation to the houses, roads and fields of the village of Paluküla. (Aerial photo: Estonian Land Board)

Ecology and biodiversity
The hill forms part of a watershed area. It comprises diverse smaller heaps and valleys and is the most prominent point of the Paluküla end moraine and the kame field. Most of the hill is covered with forest. Forest habitat types include Fennoscandian herb-rich forests with Picea abies and Western taiga. The Estonian environmental registry reports protected forest bird species including the white-backed woodpecker Dendrocopos leucotos, bat species and a population of red wood ants (Formica polyctena).

Threats
Almost all villagers say that the hill is important for them but some people are divided by influences from outside such as commercialisation of land use, building and development and possible EU interference. The administration of the Kehtna municipality is set to build a sports and recreation centre on one side of the hill. Immediate neighbours are disturbed by the proposed projects that would alter their everyday lives. According to the detailed spatial plan of the centre, two ski-lifts and water-pipes for artificial-snow cannon would require excavation. In addition, twenty buildings, plus parking areas; a volleyball square, two tennis courts and a football stadium have been planned next to the site, all within the nature conservation area.

Custodians
Followers of the Maausk regularly perform individual and communal rituals at the site. They have traditionally protected sacred natural sites by local bans of timber and agricultural practices. They continue to honour the sacred hill and some formed an association to protect the Paluküla Sacred Forest Hill. The association acts as a custodian of the hill and aims to study and conserve the sacred site and communicate with other organisations. A supporting organisation for indigenous local nature religion, the ‘Estonian House of Taara and Native Religions’ has been registered as a religious organisation. ‘The House’ protects and revitalises sacred natural sites all over Estonia.

Vision
The custodian movement is working to protect and conserve sacred natural sites such as Hiiemägi from forest cutting and building plans. Sacred natural sites throughout Estonia should be protected and the institutions dealing with natural and cultural heritage management need to be equipped to support conservation efforts by custodians. These special places, where human activity does not dominate over nature, unite nature and heritage and at the same time have the sacred dimension. In this case of Paluküla, the half-open southern hillside could be used for sliding in winter for the foreseeable future, but without artificial constructions. The site can furthermore serve as a living example for nature education, introducing cultural conservation practices to a broad audience.

Coalition
Local custodians first made contact with the Estonian House of Taara and Native Religions. An analogical organisation in neighbouring Finland, Taivaannaula, has collected signatures in support of the hill; Finno-Ugric people have similar sacred natural sites and corresponding traditions. Estonian Fund for Nature gave legal advice and issued a statement in support. A non-governmental organisation, Estonian Greens, included the case in their book of interviews on nature protection in Estonia.

Native Americans, on their visit to Estonia, had a ceremony on the site in support of the sacred natural site. Some biologists, folklorists, and archaeologists support the case with their professional knowledge. 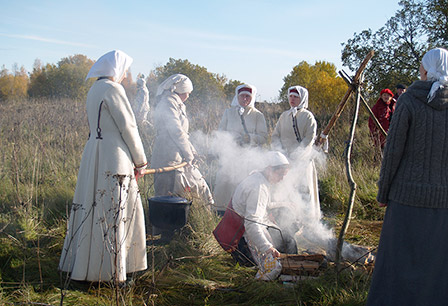 Making porridge and singing folk-songs of the older type at a gathering on the Sacred Forest Hill in Kunda (northern Estonia), October 2009. (Photo: Heiki Maiberg)

Action
On November 8th 2004, within period known as “Foggy Souls’ Time”, a gathering of people on the hill was able to stop the bulldozer and attract public and media attention. Signatures from all over Estonia were collected for a petition. Local custodians initiated a court case against the detailed spatial plan about a winter sports centre and including sky-lifts. The construction permit was withdrawn, but the plan was not forgotten. The case now lies under authority of the European Court of Human Rights. Local custodians keep watching out for preliminary construction permits and still challenge them when necessary.

Conservation tools
Translation of the ‘IUCN UNESCO Sacred Natural Sites: Guidelines for Protected Area Managers’ into Estonian in 2011 and subsequent introduction of the book in regional offices of the Environmental Board, has enabled to take sacred natural sites into account in planning processes. The new general plan of the Kehtna municipality mentions sacred natural sites and does not allow their harm with constructions.

Results
The hill remains intact; the forest is not cut down. Protected and other species still live in their habitats. Meetings of the people, following old native traditions and celebrating holidays of folk calendar take place again. Ritual fires take place at the traditional fire-place and all stakeholders increasingly take the sacredness of the hill into account. Custodians now have international contacts and the national conservation plan on sacred natural sites in Estonia 2008–2012 has been partly implemented. Fieldwork on inventory of the sites has begun.

Oral heritage, written down from Paluküla in 1937:

"Another case was that many alder-trees had been cut down from Hiiemägi. It meant bad because before the trees surrounding the offering stone were holy. And the prediction came true. This year many cattle died in the village."
- Estonian folklore archives ERA I 5, 723 (2) 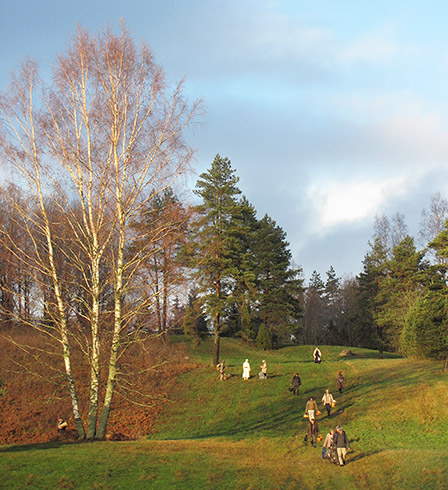