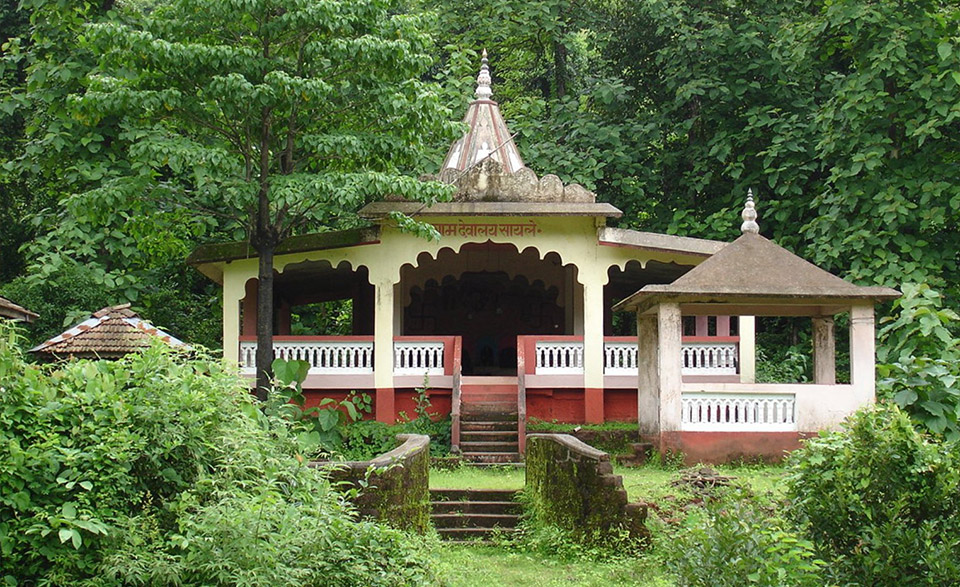 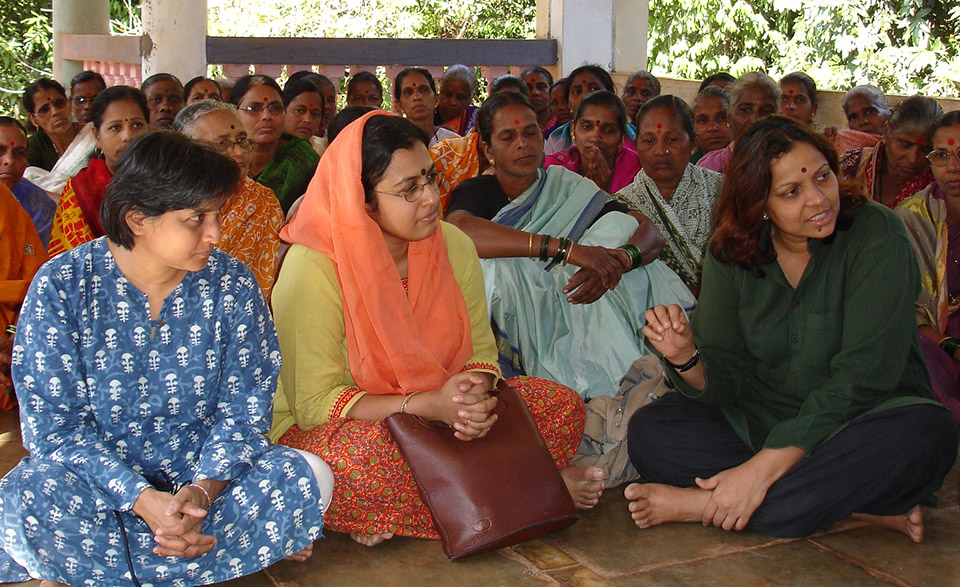 A meeting in a temple at Yanvale is held to discuss the communities needs that are required for them to conserve their sacred groves. (Source: Archana Godbole.) 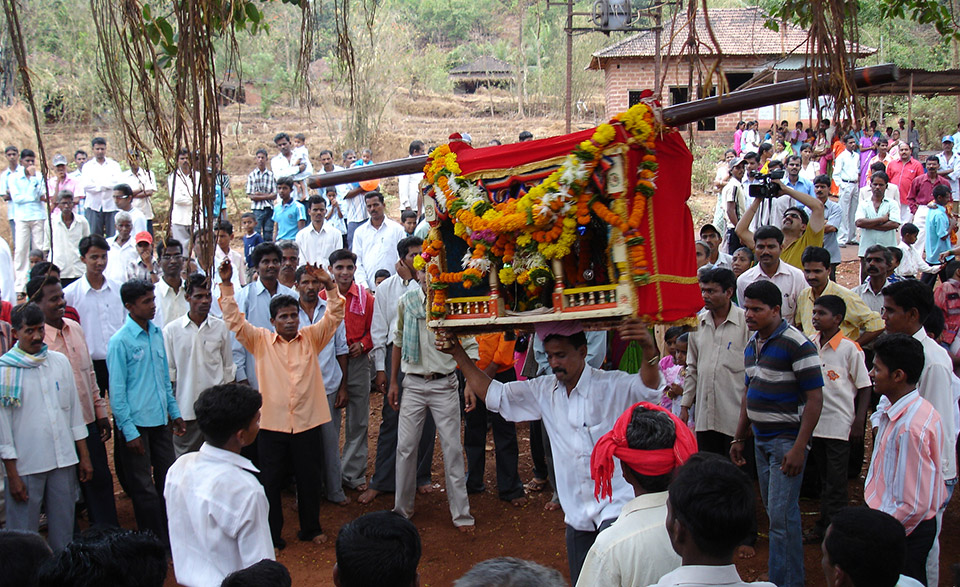 Gods and goddesses are placed in the Palkhi during the Holy festival at a village in the Western Ghats Maharashtra, India. (Source: Archana Godbole.) 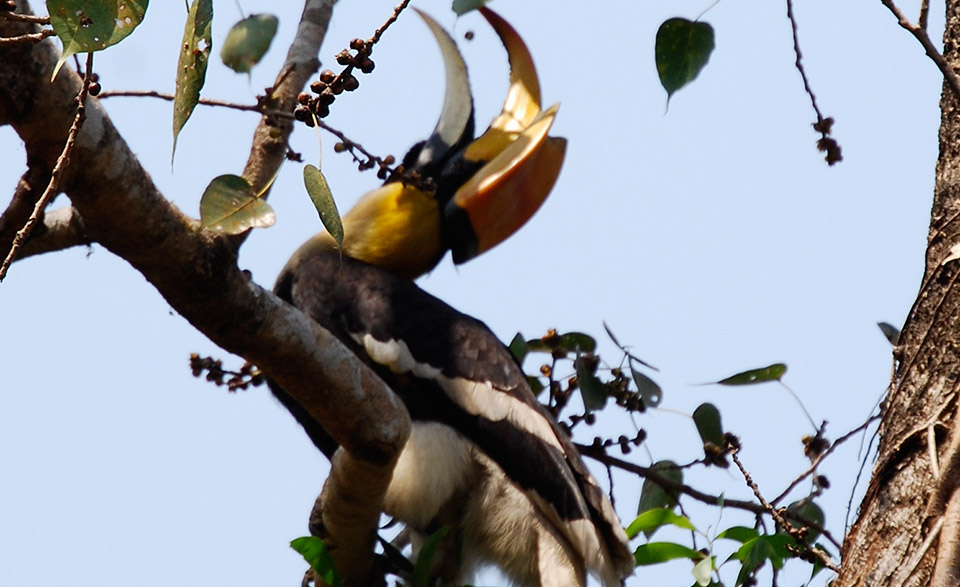 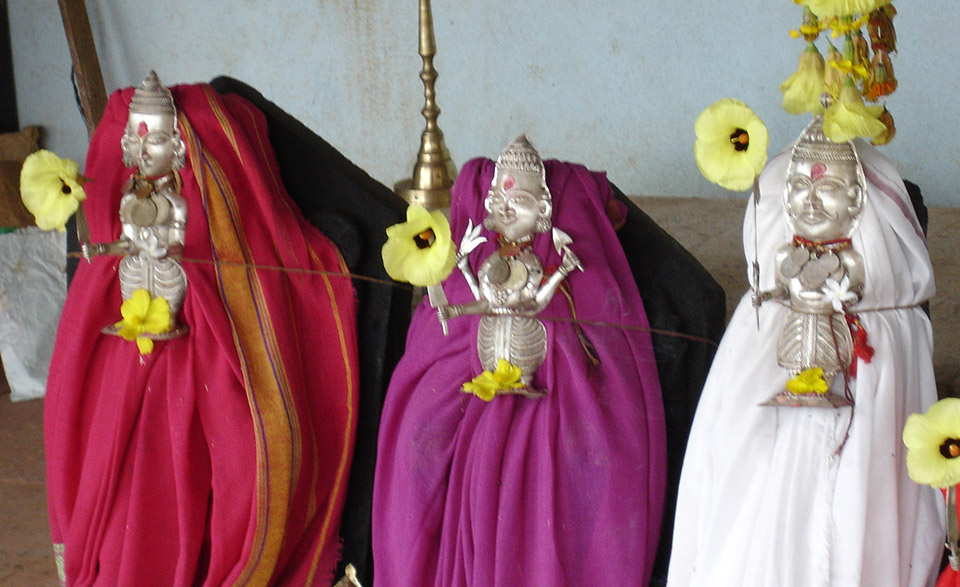 Deities in a temple at Nive, Maharashtra Western Ghats, India. (Source: Archana Godbole)
Site
The north Western Ghats of India in Maharashtra state is an eco-region forming a global biodiversity hotspot. The high biodiversity of the region is complemented by a high diversity in local traditions in the region. Almost every village in the Sahaydri-Konkan region has at least one sacred grove with a surface ranging from just a few to hundreds of hectares. Sacred groves have survived for many hundreds of years, and today act as reservoirs of biodiversity harbouring many plant and animal species as a patched network of relatively undisturbed wildlife.
Status
Threatened.

Threats
Threats to sacred groves stem mainly from acculturation and globalization. Small sacred groves are often considered as small negligible patches of forests that hinder development work. Many sacred groves have been destroyed, and only the man-made temples were preserved. Examples of reasons why these groves have been removed are encroachment, road construction, grazing, the building of dams and canals and urbanization. Decisions to alter or remove a certain grove often come from the nearby villages where increased western influences cause a weakening of religious beliefs that is spreading throughout the region.

Vision
The region is likely to benefit of an appropriate form of co-management of the sacred groves, by local custodians as well as by other regional stakeholders. The most promising way to achieve this is by re-establishing cultural norms and empowering custodians, local people and traditional governance bodies. Long term work is important to create solid alliances between different parties. Continuous financial support is needed together with strong ongoing facilitation of the processes involved. These could be effective means to pass on the sacred groves and their biocultural importance to the future generations.

Action
AERF has worked specifically on up scaling and replication of the long-term management of sacred groves with community involvement in different villages. They have attempted to revive the traditional approaches to nature by raising locals’ awareness and by developing incentives for management. They have brought together stakeholders at both block and district levels.

Policy and Law
The legal ownership of the groves is currently with the state revenue department. The protection of sacred groves in the region cannot use the same legal system as that for forest protection because the rules for management are different. In some sacred groves, limited allowance of extraction is established for specific non timber forest products. Rules and regulations defined by the ancestors are not written down, and are sometimes twisted for short term benefits.

Custodians
Traditional conservation practices such a sacred forests are an important component of the landscape in three districts of the north Western Ghats Maharashtra state. The groves are mostly owned by villagers who are still able to survive on their lands without having to develop their sacred groves. Management of the sacred grove including religious functions and protection is supervised and monitored by a group of village elders. The cultural significance is high, and most of the community festivals are celebrated in the temple situated in the sacred grove. Some of the groves also function as burial grounds and crematoriums and some are abodes of ghosts and deities. Except for water, people do not use any resources from these groves as is done in other regions in India.

Coalition
The Applied Environmental research Foundation (AERF) has been working on sacred groves conservation in North Western Ghats for over 15 years. In Sangameshwar block, AERF has revived the tradition of sacred groves and involved local people in planning as well as implementation for long-term conservation of the sacred groves.

Conservation tools
Co-management is one of the important starting points, facilitating mutual understanding between parties. Stakeholder sessions have been organised, making different groups enthusiastic and curious about the sacred groves. The media play an important role in building consensus and awareness about environmental issues, but they could discuss more topics on sacred groves. AERF stimulates local communities to revive their ancient traditions through participatory work. They used local traditional myths, dance, song and ceremony to develop a common understanding of villagers’ cosmovision, restoring it where needed to support the maintenance of the sacred groves. Additionally, they make biodiversity inventories to reveal the gravity of the situation.

“Decisions such as seeking permission for using the sacred groves resources for the village well-being are generally taken in the temple”.
- Archana Godbole, Director of the Applied Environmental Research Foundation.