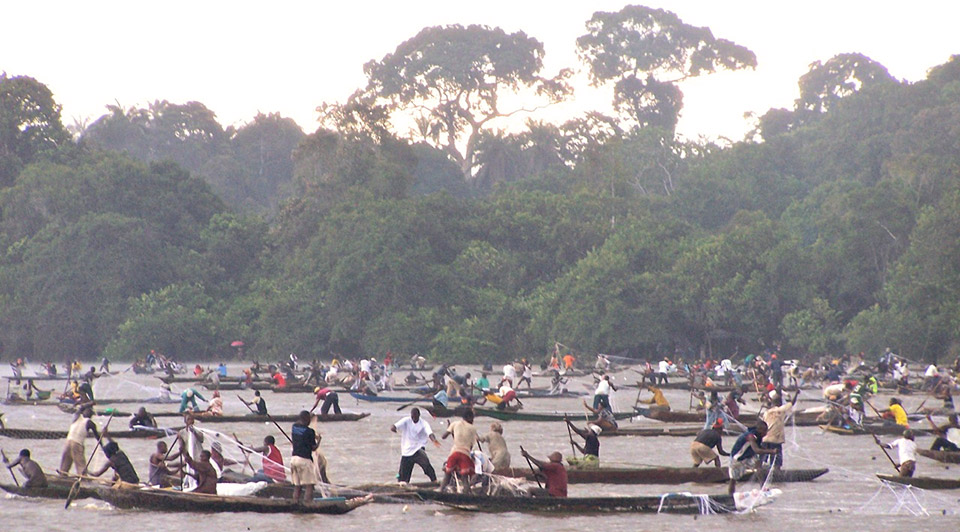 Fishing activities on Lake Adigbe of the Osiama people in the Niger Delta region. The influx of people on the lake and into the community, during each fishing festival, is an added pressure on natural resources within the region illustrating the need for respect for the sacredness of the lakes and the related regulations for access and fishing.
(Source: E.D. Anwana)

Site
Over the last 400 years, the ecologically rich Niger Delta has played an important role in the global economy through palm oil, slave trade and now through fossil fuels. Economically powerful stakeholders still pose threats to the Delta’s natural ecosystems, thereby affecting the cultural traditions and territories of two main groups of indigenous peoples. The Biseni people occupy the upper regions of the delta, while the Osiama people inhabit the lower the marsh forest zone. Both groups perceive their lands and particularly their lakes as sacred. Two important lakes are Adigbe (inhabited by the Osiama people) and Esiribi (inhabited by the Biseni people). Both are home their sacred brothers: the crocodiles.

Ecology and Biodiversity
The Niger Delta is known for its unique ecosystem; it is part of an important tropical zone, home to the nationally threatened crocodile (Osteolaemus tetraspis). It also houses a variety of IUCN Red List species, such as the Red Colobus Monkey (Piliocolobus pennanti epieni), Scatler’s Guenon (Cercopithecus sclateri) and the Spotted-neck Otter (Hydrictis maculicollis). The region is divided between the southern tidal freshwater or Marsh forest zone and the inland flood forest zone. Recently, inhabitants have noted invasive species such as the grass Burhead Sedge (Oxycaryum cubensis).

Threats
Several factors threaten the biodiversity, as well as the indigenous cultures of the Adigbe and Esiribi lakes. Community members increasingly engage with livelihood opportunities -such as dynamite fishing for example- that bring change to their way of life causing them to make concessions to their traditional beliefs. The weakening of traditional leadership for example provides opportunities for power and influence to come to social or political groups that share other values. Migrants who enter the region in search of job opportunities at oil companies pose higher demands on local fisheries for food supply. Changes in religious orientation decrease the traditional and iconic values of sacred crocodiles and respect for the local flora and fauna in general.

Custodians
In the cosmology of both communities two realms of reality exist: the visible world (Kiri) and the invisible world, or the land of spirits (Teme). The visible world is perceived with the natural senses and contains humans, plants and animals. The invisible world is composed of spirits which are not perceived by the physical senses. The custodians of the sacred lakes also ensure that the traditional rules and customs are fulfilled so that both worlds can exist in harmony together. They ensure that protocols are observed regarding lakes which are forbidden to access (Aweýe), and lakes which are accessible (Aweaya). As a result of these traditional regulations, specific animals such as crocodiles and lizards are not harmed and have long been well protected in the region. These animals are seen as brothers and local people do not want to hurt them and they are anthromorphised and in fact seen as a brother. If one accidentally or purposefully kills one of them, they receive full funeral rites as with humans and it has to be replaced with a living specimen. 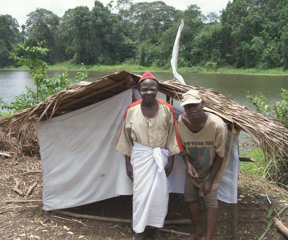 Priest and assistant in front of shrine erected for sacrifices to the lake god at Lake Esiribi. The Biseni people carry out sacrifices in the shrine which are mandatory before and after the fishing festivities. (Source: E.D. Anwana)

“The Crocodile is like our brother, and so cannot be hurt” - Anonymous Osiama person.

Vision
Sustainable management of these freshwater ecosystems will be greatly improved by adapting management to the traditional stewardship model of the local communities. Strategies should centre on maintaining the traditional system of rotational fishing as the time lapse between fishing events encourages the rejuvenation of fishery and aquatic resources. This in turn leads to higher productivity and contributes to the high biological diversity of these lakes.

Action
More organization of local events and recognition of traditional leadership could benefit more successful collaboration. Some scientific studies, assessing indigenous knowledge of the region, show nature and culture are closely related and evidence the value of traditional governance and management. They recommend enforcement of the Ramsar convention’s resolutions regarding cultural values and community participation.

Policy and Law
Local policy and legal instruments account very little for the rights of indigenous people in areas traditionally conserved by them. New laws could be vital for sustainable development in the area. A framework is necessary, providing tools for the implementation of Resolution 61/295 of the UN Declaration on the Rights of Indigenous Peoples. Also important, is the review of the nation’s land-use Act in favour of custodians and Indigenous Peoples.

Coalition
Government involvement in the region is usually regarded with suspicion. Intervention of the government may, however, be requested in situations where villagers do not have the capacity to protect or manage their resources, but are allowed to maintain ownership and control them. This is an opportunity to build multi level capacity for co-management of resources.

Conservation tools
Selective fishing is the most prominent conservation tool that is currently deployed but not necessarily functioning. To counter the increasing powers of big players in the area, the government could seek allegiance with the communities and assist them in building capacity to share knowledge and monitor biodiversity. Group training could be an effective way to ensure reciprocal understanding of all resource users, recognise traditional governance and management of minority groups in particular.

Results
Some communities have a strong social cohesion and inspire others to open up for capacity building with the government. Scientists have gathered important insights, helping custodians to maintain traditional belief systems and to undertake organised measures for nature conservation. Most of these results reaffirmed the value of traditional customs. The role of custodians as well as their knowledge in some cases has further contributed to better insight into ecosystem functioning. Their openness to collaboration communication will help in protecting these sacred natural sites in the future.