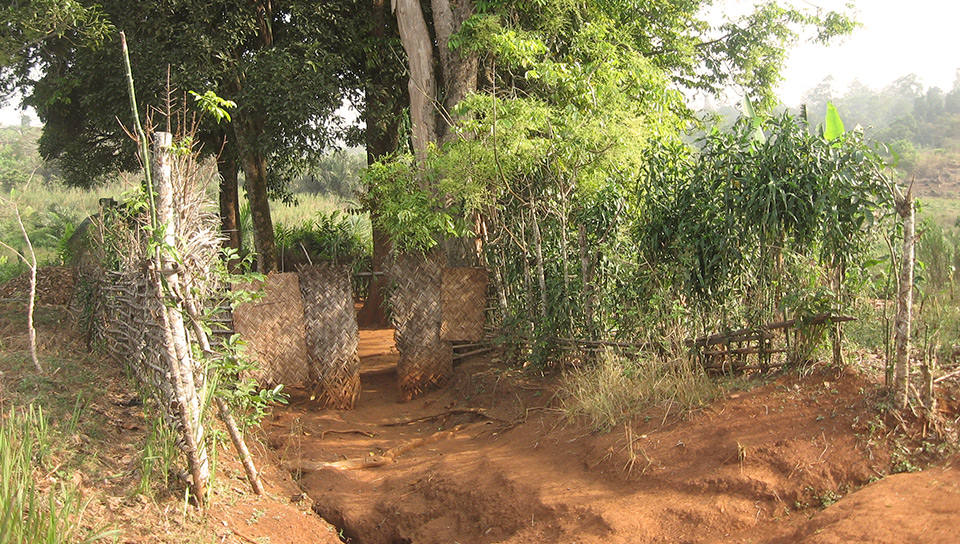 Located in the administrative centre of Banjoun, Tchuep-Poumougne is a sacred area of high spiritual value. In the past, the area of its influence covered the whole Pete Quarter. Because of urbanisation its surrounding natural values have have drastically eroded and the real sanctuary now remains. (Source: Kamga-Kamdem, S L., 2008.) 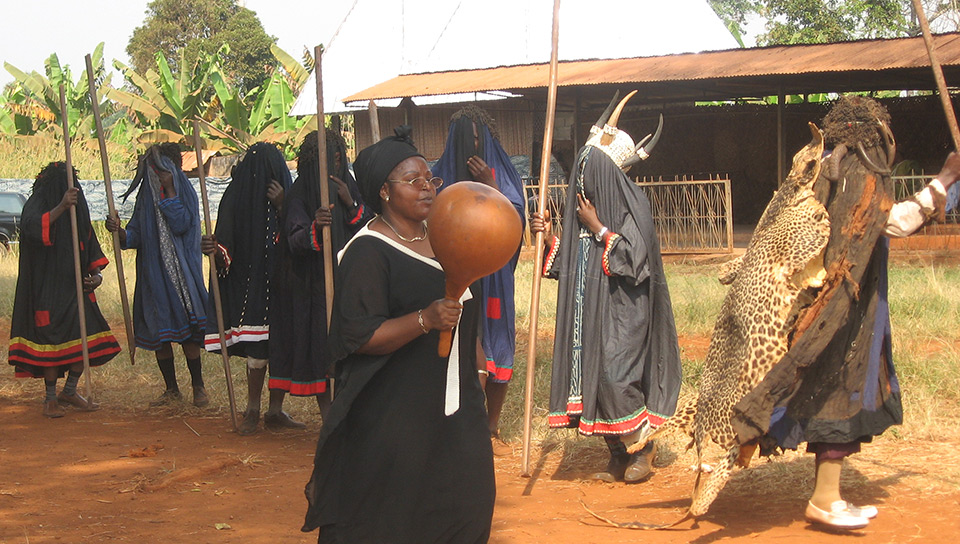 Coronation ceremony opt queen at Simdzedze palace. Queen is a title reserved for the kings mother or sisters. It is transmitted through succession from mother to daughter. (Kamga-Kamdem S., 2008.)
Site
In the Bandjoun territory in the West of Cameroon lie various sites perceived as sacred by the local people. They are the remnant cores of sites that were historically a lot more extensive representing the identity of tribes and communities in the region. The character of separate sites differs in terms of function and the social group that makes use of it. Two examples are family shrines, usually with presence of a fig tree (Ficus sp.), and community gathering places which constitute centres of traditional initiations to the community life. The shared function of most sites is worship of the gods. Even though the ecology of these sacred natural sites has received little attention to date, they are known to harbour animals and plants which have largely disappeared from the surrounding areas.
Status: Endangered 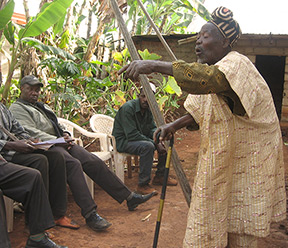 Traditional sacred natural site custodian in Cameroon explains to the participants of a meeting how these places are important for the communities relationships with their ancestors. (Photo: Kamga-Kamdem, S L. 2008.)

Threats
Traditional leaders stated that the survival of sacred areas is not threatened because these areas are strongly linked with the community identity. Nevertheless they worry about the changing attitude of young people who are becoming increasingly materialistic and disobey taboos and show lest respect for ancestral beliefs. Today, many people use sacred areas without informing their custodian, indicating the erosion of cultural norms. More key threats have been identified, yet most are under debate among the local people themselves.

Infrastructure development, especially road construction and urban settlement, has caused the degradation of sacred areas in Bandjoun. The expansion of Christianity offers alternative views on the need for protection and honesty. Some Christian priests are said to have a diabolic view on the sacred sites. According to some local traditional spiritual leaders the fact that for Christian’s punishment of wrong deeds comes after death, while for local beliefs punishment takes immediate effect increases people’s disobedience of the ancestral beliefs and taboos.

However, a decreasing influence of Christianity on local beliefs is also reported as well as an increasing willingness of Christian priests to listen to locals and work on an interfaith understanding. According to some, even modern education can have a negative impact on traditional beliefs, due to the decreasing time children spend with their parents. Additionally, the changing lifestyles cause a decreased interest in traditional values putting the continued care for these sacred natural sites at risk.

Custodians
Over the centuries, the Bandjoun people have developed an ancestral management system of sacred natural sites. The location of natural and semi-natural sacred sites is identified by the initiated spiritual leaders (MkamSi, Guèkè). While most have been long-established, the location of a sacred area is not immutable and can be changed for reasons like road construction or socio-political reorientation. Generally, each sacred area comes under the responsibility of a custodian called Nongtchuép. He is responsible for making offerings and sacrifices, for which he can also mandate a representative. These are initiated elders who are universal custodians. They have the right to work in all worship sites.

Even though women are generally regarded as heaving little to do with sacred areas, deeper investigation revealed that their role is present, but hidden and ignored. For example, Megnesi (female equivalent of MkamSi) have the same capacities and duties as their male counterparts. Only the mothers of initiated twins can clean certain sacred sites. A woman can substitute the family chief and make offerings and sacrifices at a sacred place. Furthermore, the traditional education is primarily given by women who enforce conservation regulations for sacred areas.

Vision
The greatest progress supporting the conservation of sacred areas would be their legal recognition, increased public awareness, reduced negative changes in land use and a better recognition of their socio-cultural and ecological importance. To achieve all of the above will require involvement of stakeholders at local, national and international levels.

Coalition
Effective and appropriate support is needed for further conservation of these sites. As a possible solution, Bandjoun community members suggest that involving stakeholders like women, young people, NGOs, religious institutions and maybe even state institutions to develop management in sacred areas in a participatory way whilst clearly agreeing on the role of each stakeholder.

Action
Little action is currently undertaken, except for a few studies raising the awareness of Bandjoun people that their sacred sites are at stake. The Banjoun require support to identify endangered sacred natural sites important to the communities. They would like to make a clear demarcation of them and to develop an appropriate strategy for their sustainable management.

Policy and Law
The sacred natural sites in this area are currently not recognized legally. Overall forest management is the concern of the Ministry of Forests and Wildlife according Cameroonian legal statues.

Results
As a result of a social study, increased awareness of the Bandjoun people is the most important achievement so far. It is a widely held view that involvement of the state in the management of sacred natural sites could present risks and generate conflict. Government officers are suspected to want to appropriate resources, intending to weaken the power of the elders. Community members suggest raising public awareness, mapping and demarcating the boundaries of the sacred areas, improving knowledge, stakeholders working together and devolving power of the government could all be good solutions to stop the worsening situation.
Resources