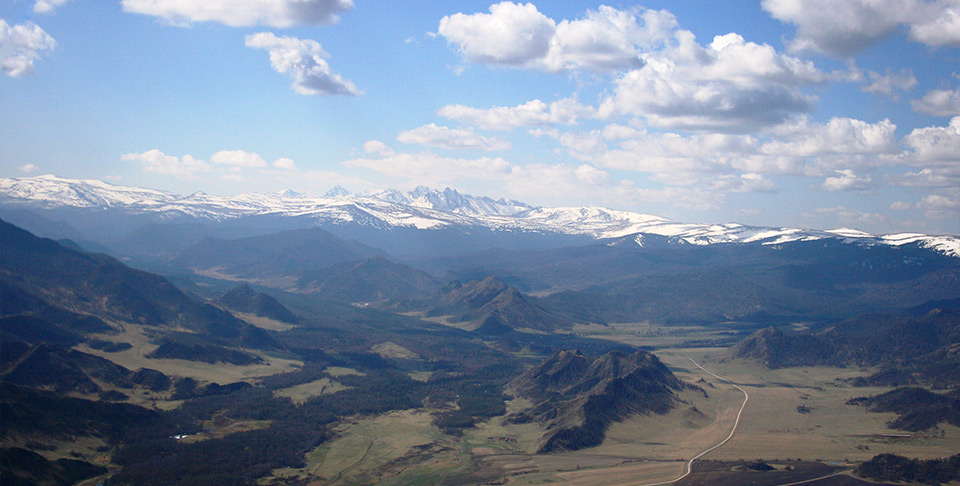 Areal View of the Karakol valley part of Uch Enmek Culture Park in the Golden Mountains of Altai. (Source: Mamyev, 2012. ) 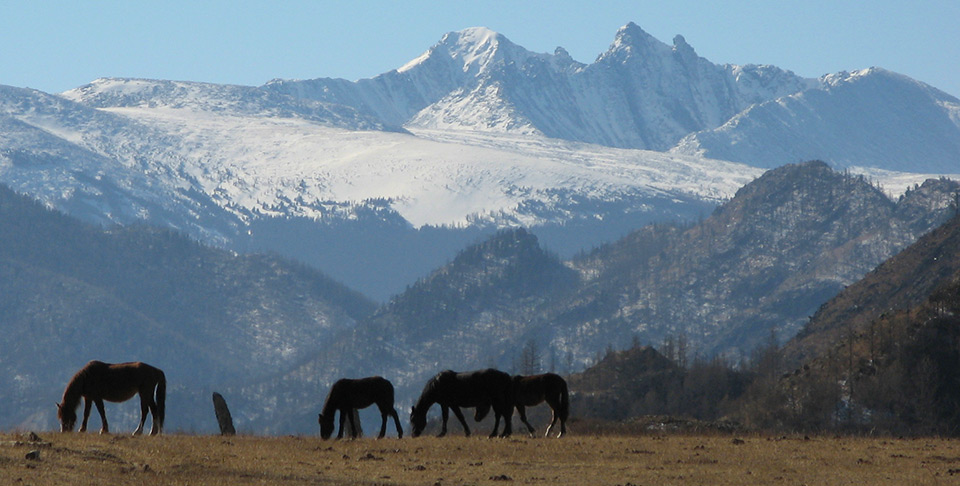 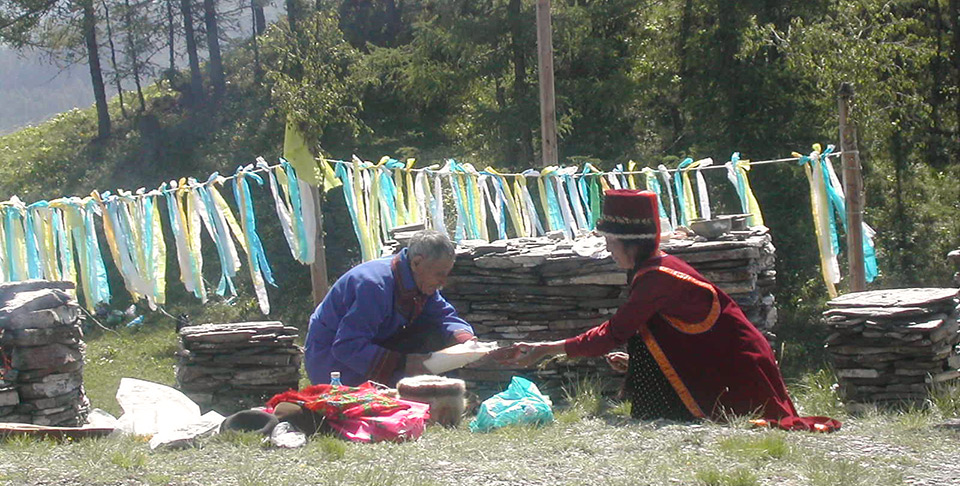 The Tagyl is a stone ritual altar used for group prayer meetings held twice a year at the beginning of summer green leaves and in the autumn yellow leaves. (Source: Danil Mayev 2010.)
Site
The philosophy contained in the Altai worldview considers natural objects (plants, stones, stars and planets) to be living beings endowed with the same functional organs as human beings. Accordingly, Mount Uch Enmek is traditionally called the ‘navel’ of the Earth. The earth is believed to receive vital energy and knowledge through this navel in the same way as a foetus receives nourishment in the mother’s womb. The natural peculiarity of the Karakol valley surrounding Mount Uch Enmek, bordering the Golden Mountains of Altai, lies in its geographical formation. The valley is unique for its widespread outcrops of gabbro and dolerite, high in magnetite mineral content. In the centre of the valley, these outcrops form what is essentially a ring of magnetite that is considered to attract the energies of the ether to the earth. The region harbours many endemic red list species, such as the black stork, the Maral Root and the Snow Leopard.
Threats
Three main threats were identified to the ecology, the culture and the spirituality related to the Karakol valley.
They are the:
1) changes in land law, land tenure and natural resource policies,
2) increasing unregulated local and international tourism and infrastructure development and
3) destruction of sacred sites by development, theft and archaeology.
Climate change is also mentioned as a threat, particularly to the local ecology. Immediate threats consist of the construction of a gas pipeline through the valley by Russian State Company Gazprom.
Status
The Karakol valley as a system of sacred sites is currently threatened by an gas pipeline under construction. Several sacred sites are directly endangered as well as red listed species such as the snow leopard

Custodians
The ethical principles of the traditional culture of the indigenous peoples of Altai have been developed over centuries. These principles presuppose the particularly careful use of natural resources. They also acknowledge the existence of specific areas which play an important role in supporting the ecological balance between man and the environment. In reference to this connection indigenous inhabitants speak of soul ecology. Altai communities contain spiritual leaders such as shamans and community elders. According to their philosophies however, personal responsibility is a predominant element of the indigenous relationship to the natural world. Taking responsibility for ones relationship with the natural world is consequently regarded of high significance to the modern world. 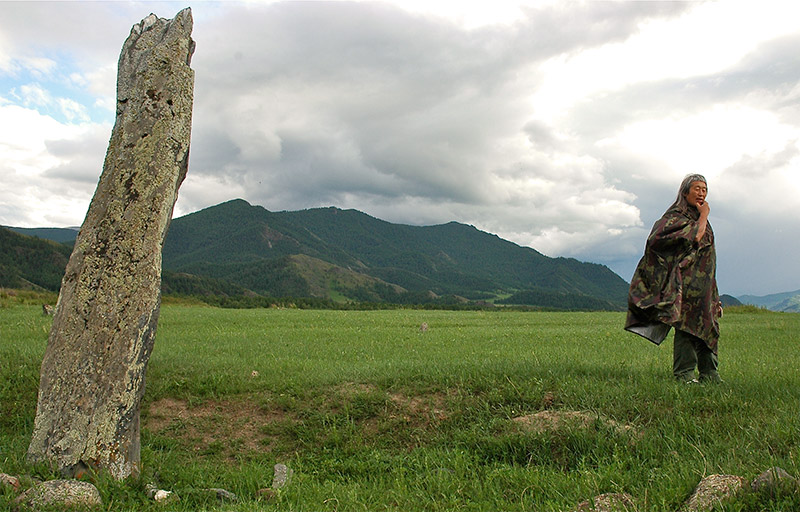 Vision
The uniqueness of the indigenous initiative Uch Enmek lies in its attempt to express its sacred knowledge via traditional knowledge and contemporary science into a language that can be accessible to contemporary societies who may have lost their special relationship to the land. It is hoped that support may be received from the international natural and cultural heritage community in stimulating commitment to the park’s vision.

Action
The local spiritual leaders now give tours to educate tourists and to ensure that they behave according to the rules demanded by the sacred natural sites in the region. Components of the excursion include a ‘Kai’ throat singing performance, visits to rock art sites, kurgans, places of ritual and a traditional Altai meal. When the indigenous people visit the valley they prepare themselves inwardly by placing negative thoughts and emotions to one side which could ‘pollute’ the special quality of the atmosphere. As a rule, visitors are invited to do the same, taking care that their thoughts be ‘white’ and ‘pure’. For the rest Uch Enmek’s current activities are predominantly limited to scientific research and awareness raising activities with local schools.

Policy and Law
Uch Enmek is a specially protected natural park recognized by the province, but not by Russian Law. The park has been founded by concerned native shamans and local communities ion order to protect their spiritual landscape and natural resources from outside interests, part of the park is UNESCO Man and Biosphere reserve. The protection is based on legislation termed ‘Specially Protected Nature Territories and Sites in the Altai Republic.’ It contains three zones. Zone A is the ‘nucleus’, containing 810 hectares of sacred territory. Zone B is the buffer zone. It includes historical and cultural monuments. Limited access is granted, with strictly regulated visitation for shamanic rituals and scientific research. Zone C is the development zone, containing villages and farmlands, where active preservation takes place. 30 Per cent of the park is officially owned by farmers, 70 Per cent remains unregistered.

Coalition
The Uch Enmek Indigenous Initiative has founded a Park named after mount Uch Enmek as a response to the threats facing the Sacred Valley and the indigenous culture described below. The Initiative aims to do research on the ecological and cultural situation, implement nature protection and monitoring programs, raise awareness on the local ecology and develop spiritual and ethical guidance in park management. The coalition is supported by the Foundation of Sustainable Development of Altai and international support is offered through an alliance of several organisations namely the Sacred Natural Sites Initiative, Gaia Foundation and the Sacred Land Film Project.

Conservation Tools
Education through the creation of a special school for ecological ethics based on indigenous spiritualties is an effective tool in achieving conservation. Guided pilgrimage contributes to raising awareness of the sacred, the cultural and the biological qualities of the site. Additionally, guidelines are developed for spiritual and ethical management of these sites. One of the strategies used in conservation is the translation of the local spiritual beliefs to scientific language used in planning and management. Maps illustrate the lowering effect of excavation on the earth’s magnetic field, which is believed to be a key aspect of the places spiritual value.

Results
Results of the actions encompass a database of local Cosmovisions translated into scientific language and some data on the local magnetic fields. Visitors and locals have additionally gained awareness on traditional values and beliefs. The awareness of these beliefs can, however, not yet fully face the persistent threats posed by stakeholders. UNESCO has supported missions into the Man and Biosphere reserve and local NGOs are pushing the recognition of the greater karakul Valley as a World Heritage site based on both natural and cultural criteria, the process receives little support from the current government. 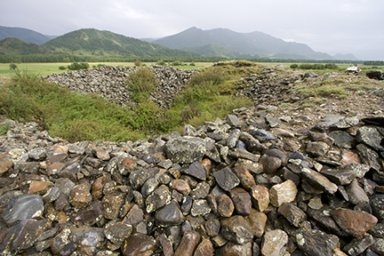 “It is very important to develop education through indigenous peoples perspectives… …We live in a responsible and important time because the earth as a living organism has reached a certain age… …has reached a Humanity is ready to understand the world through the language of indigenous people”.
- Danil Mamyev, Park Manager and sacred natural site Custodian 2012.


LEFT: An excavated Kurgan or ancient burial site at Uch Enmek in the Golden Mountains of Altai. Desecration of ancient burial places is a common phenomenon in Altai, relics are sold on the black market. (Source: Frediani J. 2008.)
Resources