A boy sets traditional fish traps. (Photo: K. John)
Site
At the east side of the island of Jamaica lies the Blue and John Crow Mountains national park, inhabited since the mid 1600’s by the Windward Maroons. Its Global importance is based on high diversity and populations of endemic flora and fauna and on related ecosystem services provided to the Jamaican society and economy. Moreover, there has been a growing recognition of the value of the cultural heritage of the Park.
Status:
Threatened; Growing threats, may become endangered in the future potential for significant loss exists.

Threats
The persistence of Maroon sacred natural sites within and outside of the Maroon community is uncertain. Main threats are the limited transmission of sacred natural site knowledge, the fact that many monuments and markers are impermanent and the risk of trivializing the sites among Maroons focussed on tourism income. The deliberate restriction of expression and transmission of the Maroon cultural heritage between the 1960s and the 1970s has driven many maroon traditions into extinction. Nowadays, the cultural secrecy of the Maroons and the marginal knowledge and interest from the younger generations prevent the spreading of this knowledge.

Custodians
The Windward Maroons originate from West Africa with some Amerindian retention and are now regarded as the most secretive group in Jamaica. At first glance, they seem to have adopted a very modern and utilitarian view of nature where forests, land and water are primarily resources for exploitation. However, many maroons recognize the mountains as a sacred landscape with significant areas of forest and streams and their views on these places often meet the accepted criteria of sacred natural sites. In the times past, these were sites of refuge, places of healing and burial grounds for ancestors. Recalling and describing these sites is a source of great pride for the elder Maroons.

Maroons felt a sense of duty to maintain their sacred natural sites in past times, complying with strict regulations. First, outsiders were not authorized to visit these sites. Next, Maroon collaborators for such events would be exposed to ‘severe spiritual sanctions’ within the tradition. Children were furthermore not allowed at many sacred natural sites, for their own safety and because many of the rituals were deemed to be inappropriate for children.

Vision
A five step approach is proposed with as a central aim to save the traditional Maroon knowledge. This will subsequently be to used for the protection of the local environments and the sacred sites in particular. The documentation and dissemination of information about sacred natural sites is urgent, but respect must be paid to the Maroon secrets. The widest possible cross-section of the Maroon community should be taken into account. It would be utile to work towards a confidential database of Maroon sacred natural sites that are prioritized for protection and recognized legally by the state. 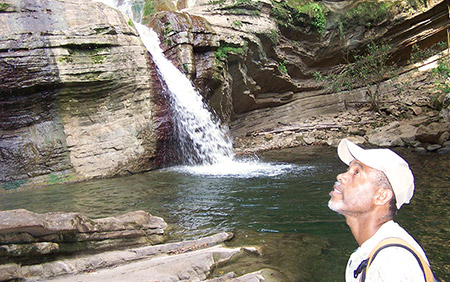 Coalition
Except for the recognition of the Blue and John Crow Mountains as a National Park, there are no indications of active management of sacred natural sites among the maroons, neither by formal management structures, nor by social groups’ norms and beliefs.

But in the face of cultural extinction, there is an increasing willingness among the Maroon leadership to partner with outsiders in the preservation of their cultural heritage and in the transmission of that knowledge to young people.

Action
The Blue and John Crow Mountains national park was declared a Forest Reserve in the 1950’s and a National Park in 1993.

Recently, documents were prepared for the World Heritage Site nomination, emphasizing the unique Windward Maroon culture and stressing the sacredness of the Park and the buffer areas.

Conservation tools
A few studies are being conducted in order to document the knowledge of the Maroon elders, but this does not seem enough so far. There are some publications of participatory research and some interviews with the Maroon Elders. Furthermore, the draft World Heritage Site nomination dossier for the park offers some insight in its ecological and cultural values. A stepwise management recommendation is available based on creating and verifying a database, education programmes and legal recognition of the sacred natural sites.

Results
Except for a little documentation on the Maroons’ perception of sacred sites and the declaration of the area as a national park, a lot of work remains to be done. However, the Park management is fostering interest in both the natural and the cultural heritage of the landscape and studies to this matter are accumulating. Since the SNS study, the Jamaica National Heritage Trust commenced the declaration of 3 natural national monuments including ‘sacred’ Maroon sites Nanny Town (Stony River) and Cunha Cunha Pass (JNHT 2012).