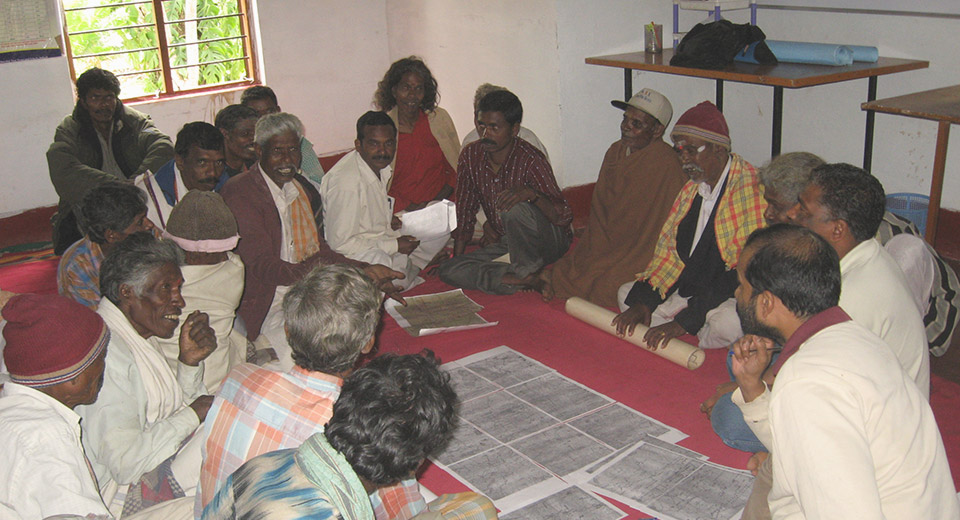 Soliga in a meeting planning the GPS mapping of their sacred and cultural sites in the forests of the Biligiri Rangaswamy Temple Wildlife Sactuary, India. Here topographic sheets with sacred natural sites on it were used tio help locate the clan boundaries followed by subsequent visits to acertain the boundaries of the yelles (SNS).
(Source: Sushmita Mandal.) 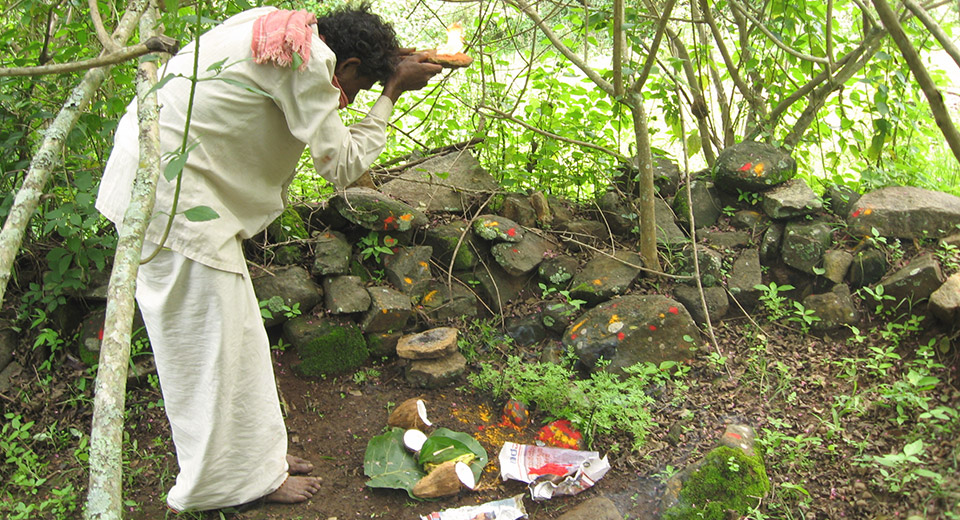 Site
In the mountainous southeast corner of the Chamarajanagara district in the state of Karnataka, India, lays the Biligiri Rangaswamy Temple Wildlife Sanctuary (BRTWS). It covers an area of 540 km2. Biligiri means “white hill”, derived either from the white mist that covers the hills for a greater part of the year, or from the white rock face that constitutes the major hill crowned with the temple of Lord Rangaswamy. This Lord is a resting form of Lord Vishnu, worshipped as the presiding deity of the forests in the Biligiri Rangan Hills. The declaration of the BRTWS as a protected site came with a set of restrictions for the traditional inhabitants, the Soligas. The access to certain spots is restricted for example, and hunting and burning of the vegetation are prohibited. Even though sacred natural sites in these areas are often seen as separate elements in the landscape, they form a cultural-ecological mosaic of interconnected places long recognised and protected by the Soligas.

Ecology and Biodiversity
The BRTWS sanctuary has a variety of vegetation types, including scrub, dry and moist deciduous forests, evergreen forests, shola, and high-altitude grasslands, all supporting a wide variety of fauna. The forests form an important wildlife corridor between the Western Ghats biodiversity hotspot and the Eastern Ghats, linking the largest populations of Asian elephants (Elephas maximus) in southern India.

Status
Threatened.
Threats
Different stakeholders have framed the threats to the ecology in the area differently. The governmental parties took up the view that the Soligas’ traditional ways of hunting, burning and non timber forest product collection regimes form a threat to the local biodiversity. They therefore have displaced forest dwellers to locations outside of protected areas but change is on the way. Soligas, however, see their actions as an age-old tradition that supports local biodiversity values. They argue that since the law prohibited them to lead their traditional lifestyle in 1974, invasive species such as Lantana and hemi-parasites on the gooseberry trees have disturbed the equilibrium and continue to jeopardise cultural and conservation values of the area. Soligas see native species face extinction because their food supply of less competitive native species is taken over by invasive ones. They say that the balance of the forest ecology provides security to their traditional lifestyles. As the managers of BRTWS take little notion of the role of human agency in these forests, the close links between the Soligas and their natural surroundings weaken, causing an erosion of the Soligas’ traditional knowledge on the maintenance of their surroundings and their sacred natural sites.

Vision
Oral histories and spatial visualization of Soliga cultural geography can be used to inform BRTWS managers, and provide context for better governance. As has been reiterated by the Soliga elders, the use, ownership and management of sacred sites can not only guarantee the sustenance of indigenous cultures, but can also protect biodiversity and water resources that are part of the Soliga landscape. These notions combined with the Recognition of Forest Rights Act provide opportunities for a better collaboration with policy makers.

Action
Community members organized meetings in which cultural idioms such as agricultural, forestry and ritual use of the sites were explored to understand and document Soliga practices. Discussions among Soligas were organized, leading to the creation of a map indicating the important Soliga sites. A few Soligas did not want their clan’s sacred sites mapped.

Policy and law
After the declaration of the BRTWS in 1974, new rules have made traditional Soliga practices harder and harder, for example by restricting access to their sacred natural sites. Following a ruling by the country’s Suppreme Court in 2006, a near-complete ban was imposed upon the collection of NTFPs within sanctuaries and natural parks. This has hampered the Soligas to carry on their traditional ways of life. Curiously, the Recognition of Forest Rights act was signed in the same year, stating that the government would do its best to ensure indigenous people’s rights to their lands, particularly in cases where their presence benefits the ecosystem. A more recent evaluation of this act revealed that its content was developed hastily, and that its implementation is not only insufficient, but it even weakens the position of some Indian tribal communities.

Custodians
The Soliga are an indigenous people who have been living in these forested regions for centuries. “Soliga” means “from bamboo”, which refers to their claimed descent from Karraya, who was delivered through a bamboo cylinder. They are a close-knit social group, promoting exogamy between different Soliga clans. They are traditionally hunters and swidden agriculturalists, and they collect a wide variety of Non-Timber-Forest-Products for subsistence. The Soliga cosmology is an extension of the natural world. Sacred sites (Yelles) are identified as composites of the five elements. The essential elements elders identified are ‘Devaru’ (God, sun, light), ‘Marama’ (Mother, Goddess, associated with fire), ‘Veeru’ (Demon), ‘Kallugudi’ (Burial stones, associated with wind) and ‘abbi’ (spring/stream, associated with water). They see the role of the ‘Veeru’ as crucial to their existence. It is feared and respected. Women are not allowed to visit areas that are considered inhabited by Veeru. These areas are generally kept out of bounds to community members, and thus protected from human use or disturbance.

"Aren’t we, the native dwellers of the forests who have been practicing litter-fires, managing to conserve biodiversity? What have so-called civilized urban dwellers contributed towards it?" - Anonymous Soliga.

Coalition
The coalition in this area consists of scientists, Soliga elders and individuals from various Soliga communities supported by an Indian NGO, the the Ashoka Trust. The Recognition of Forest Rights Act, a recent national policy development may create opportunities for a closer collaboration with the government in this respect.

Conservation tools
Counter-mapping is an effective tool. Though detailed maps of the region exist, they do not indicate sites that are important to the Soligas. During the community meetings, the local sacred sites and the traditional values were mapped using Geo Information System techniques. These maps were subsequently distributed over inhabitants and policy makers in the region, and can now hardly be ignored. Additionally, resource monitoring and sustainable harvest practices academically support the Soliga view that they support local life instead of threatening it.

Results
As the Soligas felt that their interests were not represented on the maps drawn by the government agencies, they constructed a map of their own, asserting their collective identity and their rights over the land. This map now serves as a powerful communicative and lobbying tool for their cultural heritage and for their important role in sacred locations that have been left out during government cartographic exercises. The map also helps to restore cultural knowledge and practices associated with these sacred natural sites and their surroundings.