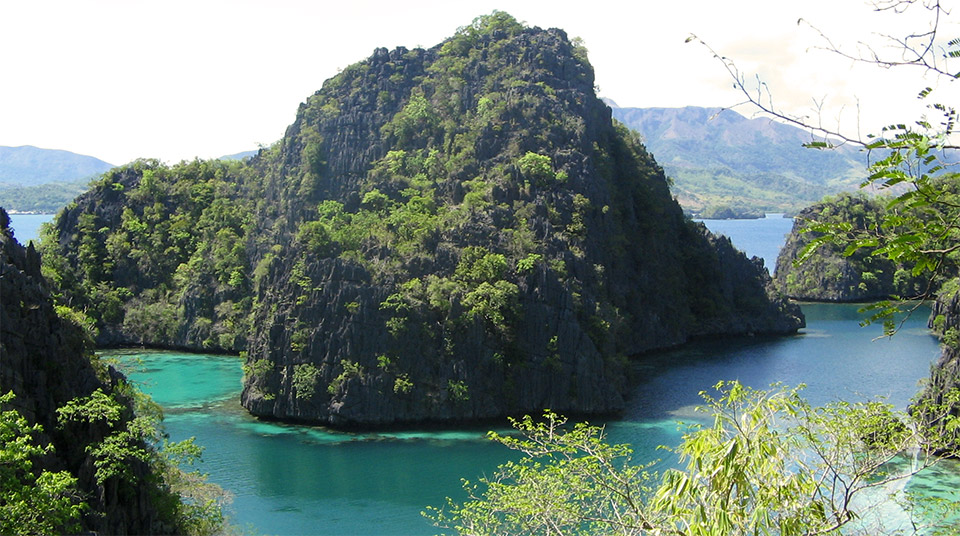 Entrance to Kayangan lake, sacred to the Calamian Tagbanwa in Coron island, Palawan, Philippenes.. (Source: Arlene Sampang.)
Site
Coron Island is a wedge-shaped limestone Island, located in the south-eastern side of Busuanga Island in the Phillipines. The majority of the population is Calamian Tagbanwa, while immigrants coming from the Visayas region of the country are a minority. This archipelago has different ecosystem types such as coral reefs, seagrass, mangroves, brackish lagoons and limestone forests that support an outstanding biodiversity, hosting a high rate of floral endemism and several rare fish species such as Blenny (Ecsenius kurti and Istiblennius colei) and Dorryback (Labracinus atrofasciatus). Lakes found in the ancestral domain are considered sacred by the Calamian Tagbanwa. It is strictly prohibited to enter these areas unless for cultural purposes such as performing rituals. Cabugao Lake, the largest lake found on the island, is considered to be the centre of spirits.
Status
Protected on paper but Threatened in reality. 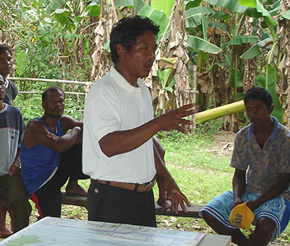 Threats
The main threats identified for this area are:
-      Unreliable governance agreements,
-      Illegal fishing methods and consequent destruction of local coral reefs,
-      Illegal logging,
-      Conversion of Forests to agricultural fields or sites with different land uses,
-      Mining kills a lot of indigenous people, decreasing manpower in protecting the lands and waters,
-      Modernization and immigration decrease the belief in and the respect for local spirits.

"The Tagbanwa had secured their land rights not a moment too soon. Coron Island had been named to be incorporated into the National Integrated Protected Areas System. What the Tagbanwa got were promises of majority participation in the protected area’s management board. The Tagbanwa had resisted. Now, having gained a title of ancestral domain over the island, the Tagbanwa want to maintain their rights to land and decision-making over resources that will affect the future of the island." - Dave de Vera, Executive Director of the Philippine Association For Intercultural Development (PAFID).

Vision
Stronger opposition will be needed to face the prevailing threats. The great challenge among the elders is to revive their strict enforcement of customary rules such as respect for sacred areas. It will need continuous transmission of cultural knowledge and practices, for example in the form of sessions among the youth. Furthermore, maintaining the balance with the other stakeholders in the region will challenge the Calamian Tagbanwa to be resilient in the rapid changes they encounter.

Coalition
The Council of Elders, Tagbanwa Tribe Association and the village officials have roles and responsibilities for the ancestral domain to be managed successfully. They are supported by larger scale organizations like the National Integrated Protected Areas Programme, the Phillipine Association for Intercultural Development and the International Indigenous Peoples Centre for Policy Research and Education (TEBTEBBA).

Conservation Tools
These sacred waters are being conserved through capacity building and strengthening of environmental awareness. Elders are given trainings and knowledge enhancement on national legal matters, so as they learn how take steps against violators. In the mean time, they are encouraged to organise sessions of knowledge transfer with the local youth. Concerning ecological understanding, interpretative walks along a mangrove ecosystem are being organized, while options are being explored to fish in a more sustainable way.

Results
Next to the protected status this region has received in various organizations, local participatory studies have yielded awareness raising results and increased cultural organization now helps strengthen the cultural identity and integrity.

Custodians
The Calamian Tagbanwa believe that spirits dwell in sacred lakes. These lakes are locally known as panyaan. Not everybody is allowed to go to sacred areas; people have to have a defined purpose to go there. Elders (mamaepet) and shamans (bawalyan) play a major role in the entrance of a sacred area. They pronounce ulliwatwat, a prayer addressing the spirits to request permission to enter. Next to the ten panyaan that exist there, fish sanctuaries are considered restricted areas, where it is forbidden to fish, drop anchors, or to culture seaweeds. They believe that there is a kunlalabyut or giant octopus living in the area. Cultural knowledge about such phenomena is passed down from elders to the younger generations through oral tradition.

Action
In 1967, Coron Island was first declared as a National Reserve, then later in 1978 as a Tourist Zone and Marine Reserve and finaly it was granted a Community Stewardship Agreement in 1990. In 1992, Coron Island was included in the priority protected areas under the National Integrated Protected Areas Programme and the strategic Environmental Plan. In 1993, it was provided awarding of the Certificate of Ancestral Domain Claim. In 1998, the struggle of the Calamian Tagbanwa to be recognized was over, Coron Island was granted its ancestral domain claim by the Department of Environment and Natural Resources.

Policy and Law
With the passing of the Indigenous Peoples Rights Act in 1997, the indigenous peoples in the country now have a support system that can protect their rights over their ancestral domain. By heritage of the ancestors, they now possess the lands, and rule over them with long established laws. But customary laws are unofficial, and elders note that few are being followed. The main problem is that there is no common vision for protecting the cultural heritage: the violator has the option to undergo the Calamian Tagbanwa law or the national law.