The Holy Hills of the Dai: Autonomous Prefecture in Yunnan Province, China 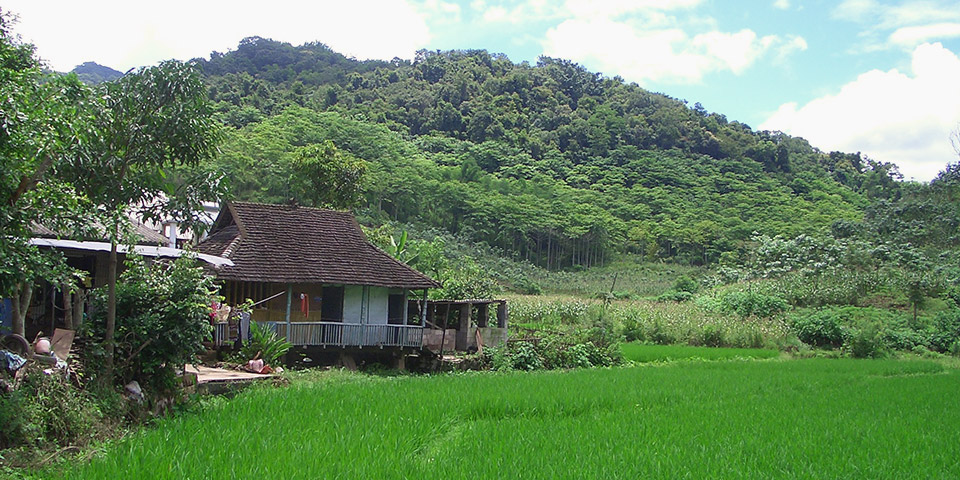 Site At the Southside of the Holy hills of the Yunnan Province lies the Xishuangbanna Dai Autonomous Prefecture, recognised as a UNESCO Man and Biosphere Reserve. Although it covers less than 0.2 per cent of the total land surface of China, it contains about 20 percent of the countries recorded species, which makes it the richest area for biodiversity in the country. It also hosts thirteen of Yunnan’s ethnic groups, mainly living in tropical and subtropical mainland areas. In recent years, reserves have been established to oppose the threats posed by economic and demographic growth.

Threats In the last 50 years, 90 per cent of the 750 Holy Hill forests have been destroyed or degraded. One of the reasons for this loss is that the rapid economic development and population increase have caused tremendous land use pressures, causing these forests to be substituted principally by rubber plantations. In addition, the forest land management policy changed from community management (1980’s) to individual management (2000’s), which created the option for villagers to lease their individual forest lands to others.

If you cut down all the trees, you have only bark to eat; if you destroy the forest, you destroy your road to future - Dai Folksong from Yunnan Province, China (Wang 1988) 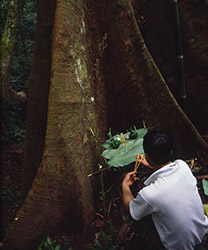 Custodians With about 35% of the population of Xishuangbanna, the Dai are the most abundant ethnic group of the Prefecture. They depend on the local forests for food supplements and water supply. They believe that some sacred forests on Holy Hills (Nong) are the residence of the Gods. Plants and animals that inhabit these forests are their companions, along with the spirits of deceased ancestors who move to these forests after their death. Violence to or disturbance of plants and animals in these forests will be punished by the Gods and is strictly forbidden in some communities. Up till about 50 years ago, these forests were protected by traditional institutions led by a spiritual head man (Bimo) of the local village. The Dai originally followed an animist tradition, which was heavily bound to the natural world, and had a forest oriented philosophy. In the Dai perception the interrelationship between human beings and their physical environment consists of five major elements: forest, water, land, food and humanity. They believe that the forest is human’s cradle. Water comes from the forests, land is fed by the water and food comes from the land. Forests thus ultimately support human life and these forests are one with the supernatural realm.

Coalition Reserve managers and local village custodians jointly manage the reserves using participatory management approaches. Community regulations on the sacred forest and traditional custom and worship activities are organized and implemented according to the villagers’ interest.

Conservation Tools Where they have survived the pressures of modernity, Sacred Natural Sites are well embedded in local cultures and traditional belief systems. Cutting trees is punishable with a fine of USD 20-40 per tree. On a larger scale, nature reserves, buffer zones and bio-corridors are the main strategy for conservation of the biodiverse sites in Yunnan. Keepers of sacred natural sites keep advocating for inclusion of their site into the network of legislatively protected biological sites.

Vision In the future, Holy Hills may be sacralised again by restoring degraded sacred forests. It is recommended that they be included in the forest corridors between protected areas in Xishuangbanna. There is a need for policy support to recognize the social and conservation value of sacred forests. This would help the establishment of protective regulations, as was done earlier in the Guangdong Province. In further development of this region, the use of traditional knowledge can strongly facilitate environmentally friendly governance.

Action Despite the dramatic loss of sacred forests in Xishuangbanna, traditional culture has been revived, and continues in the remaining forests. Worship ceremonies are conducted in August and November every year and all members of the village participate, offerings of food, chickens and pigs are made. In addition, indigenous locals as well as external supporters have advocated for the establishment of nature reserves in the area.

Policy and Law Sacred natural sites are not recognized by law. If anything, legislation changes have facilitated their degradation in the past decennia. As they often house a number of protected species however, there is potential to have them recognized as biodiversity hotspots. This is happening indeed.

Results According to interviews with people in four villages in the reserve, no cases of tree cutting, hunting or overharvesting have been known to occur in the sacred forest area in the past 20 years. This shows that community participation in the sacred forest management in the reserve is effective and successful. The establishment of certain reserves has been a major step towards sacred natural site conservation in Yunnin, but further protection remains desirable.