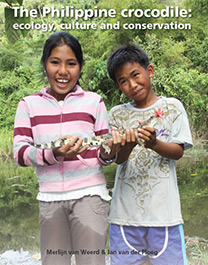 Site
On the east shore of the northern island of the Philippines, lies the Nothern Sierra Madre Natural Park. The Kalinga are the indigenous people of the Sierra Madre, practicing shifting cultivation on the forest frontier. They long coexisted peacefully with the Philippine crocodile (Crocodylus mindorensis). Believing they are the embodiment of their ancestors, Kalinga place the reptiles central in their culture. With modernization seeping into the region, however, traditional customs and values change rapidly, threatening the cultural values that have, even though mostly unintended, led to the conservation of the local crocodiles to date.

Ecology and Biodiversity
The northern Sierra Madre has a tropical climate, with a dry period between February and May. Two crocodile species occur in the park: C. porosus and the endemic C. mindorensis. Bird species number over 200 and include the also endemic Philippine Eagle (Pithecophaga jefferi), the Philippines eagle-owl (Bubo phillipensis), the Luzon Hornbill (Penelopides manillae), the Philippines dwarf kingfisher (Ceyx melanurus).

Threats Philippine crocodiles are mainly threatened by hunting and habitat loss. Crocodile skins have been a lucrative product on the international market. Degradation of the entire ecosystem is driven by human population growth. Marshes and ponds are being converted into rice fields. Mangrove forests are cut for fire wood and to make way for plantations leading to erosion and siltation of the river banks. Subsequently the local rivers are polluted by pesticides and waste.

Custodians
Mocked by mainstream society that sees Kalinga believes as backward or old fashioned, the Kalinga are reluctant to speak about their ancient habits and rituals. In the ancestral domains the Kalinga generally perceive the crocodiles as their ancestors According to their culture, to kill or speak badly about a crocodile will cause it to take revenge. You may get sick. Kalinga people offer crocodile shaped rice cakes to the ancestors during local festivities and healing rituals, and smaller offerings when they are about to cross a river. The bugeyan, or the traditional healer, is believed able command crocodiles or even turn into one during trance. Christianity has entered the region, causing most Kalinga to give up their traditional values and practices. Even if Kalinga people still show respect for the local environment, they have been dispossessed of most of their ancestral lands.

Coalition
Government resources for protection are scarce, and conservation is primarily community-based. The Mabuwaya Foundation leads the initiative, supported by local governments, the Isabela State University, the Department for Environment and Natural Resources and rural communities.

Conservation tools
On-going research provides knowledge about the current state of the ecosystems, and about the options to preserve crocodiles in the wild. Protection of the livestock in the region is ensured with sanctuaries: places where fishing is prohibited in order for the fish populations to stay strong. These sanctuaries also serve as breeding sites for Philippine crocodiles. As an encouragement, villages receive up to 1000 pesos for every crocodile surviving in the wild.

Results
A public awareness campaign slowly changes perceptions of and attitudes towards crocodiles, increasing respect for the animals and knowledge about environmental legislation. The conservation actions by local community members have successfully helped the hatching of more crocodiles. 109 Philippine crocodiles have been born, raised and released in the past 10 years. The book “The Philippine crocodile: ecology, culture and conservation” is a landmark, creating an overview of valuable information, which will support and popularise its conservation into the future.

Vision
Local people demonstrate that coexistence with crocodiles is possible. Local Mayor’s efforts to carry out newly established laws serve as an extra stimulant for those who do not traditionally learned how to coexist with crocodiles. The fate of the Philippine crocodile and its living environments has become a cause that involves many stakeholders from indigenous and local people to decision makers at various levels of governance.

"People used to cross the rivers on the back of crocodiles."

Action
Crocodile conservation actions are largely community-based Since 2005, people in San Mariano actively look for crocodile nests and place demarcations and fences to protect them from destruction. Shallow ponds are constructed to restore crocodile habitat, where juveniles can grow under optimal conditions. A program of the Mabuwaya Foundation is helping to gradually increase the numbers of crocodiles in the wild.

Policy and Law
The Philippines government declared the Northern Sierra Madre Natural Park in 1997. The area has been submitted as a potential world heritage site of the UNESCO. It is listed in the top 10 priority protected areas in the Philippines. The Philippine crocodile is protected by virtue of Republic Act 9147. Killing a specimen or destroying its habitat carries a penalty of 100.000 pesos or six years of imprisonment. However, this law is seldom carried out and most of the local inhabitants remain unaware of the law.