Elisabeth Kapellou lights a candle in the chapel of Panagia Paliouri (Birthday of Virgin Maria, 8th of September) in Mikro Papingo. The chapel is surrounded by its sacred grove. On that day the village is celebrating and villagers who live elsewhere try to attend the service and celebrations that follow. © Kalliopi Stara, 9/20012.

Nikolaos Staras accompanied us in “Megala Pournaria” (literally “Big Prickly Oaks” Quercus coccifera), the sacred grove above Kato Pedina village in Zagori. Protection of the grove was achieved thought dedication of the forest to the central church of Agios Athanasios. © Kalliopi Stara, 9/2005.
Site
A network of Sacred Natural Sites is found in Zarori, a region in the mountainous areas of Northwest Greece. These are either protective forests or groves on the mountain slopes above villages or groups of veteran trees around chapels. Their spiritual foundations and maintenance have been interpreted as a way of management of local resources and ecosystems through religious rules. Sacred trees and groves have been associated with taboos about tree cutting, for example relating to supernatural punishments. In the past, these locally adapted management systems regulated the use of ecosystem services by the community. They also served as a last resort in times of need or as a protection for the villages against natural hazards.
Status
Threatened; Growing threat(s), may become endangered in the future, potential for significant loss exists.
Threats
During the 20th century and especially after the Second World War, changing patterns of land use and population decline have had a dramatic effect on the social structure, management practices and cultural landscapes of rural Greece. The collapse of local management systems was due to the coming of modernization and the indifference of centralized authorities. It has caused sacred groves to be degraded and threatened wherever they posed a conflict with modern demands. Despite this, sacred areas continue to be respected by local communities and they still constitute an important part of the older generation’s identity.
Custodians
Most sacred sites in the region are being looked after by the local people. In the past Zarori was inhabited by the Zagorians who founded the villages and the linguistically distinct Vlachs. Pastoral transhuman Sarakatsani but also Gypsies and other migrants who were employed as labourers frequented the area. Shared traumas and population decline, especially in the 20th century, have eroded ethnic distinctions and today the “Zagorian” appellation incorporates all ethnic groups into an emerging identity defined by Zagori as a place of origin or habitation.

All inhabitants are Orthodox Christians. Beliefs about sacred trees and groves are, however, primarily associated with pre-Christian ideas. Mature trees for example, are seen as demonic creatures or as haunted by such beings and can thus damage those who try to harm them. Such local beliefs are either reinterpreted in the prevailing religion or coexist informally with it.

Vision
Nowadays taboos are fading together with the older generation. Elements of these taboos have however been maintained through respect for a community’s history and traditions. Our vision is that the Sacred Natural Sites are recognized as places of spiritual and historical value for the younger generations. We aim for that their cultural, aesthetic and ecological qualities are preserved and managed in an adequate way. 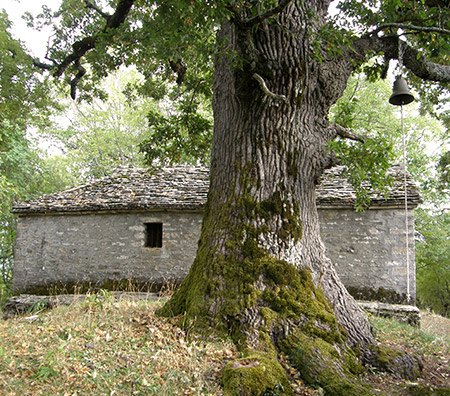 Chapel dedicated to Transfiguration/ Metamorphosis of Christ and its associated belfry oak (one of the ten largests in diameter of the 327 surveyed) in Vitsa. (©Kalliopi Stara, 9/2006.)

Coalition
Sacred groves are little-known, even in modern Greece. The effort to survey them in Zagori started in 2003 and has been continuing since with financial support from various programs of the Greek Ministry of Environment and the EU. The University of Ioannina (UOI) has been involved since 2005. A new interdisciplinary project based at UOI “Conservation through Religion: the Sacred Groves of Epirus” (“SAGE”, 2012-2015) aims to study their biocultural value in the context of effective conservation. A total of 38 social and natural scientists from Greece and abroad will be involved. The local community has shown mainly positive interest in these efforts.

"Our religion is alive. I have seen Agia Paraskevi. She was shouting. I was a child of 16 years, late afternoon, it was raining. I was passing by above the monastery. And under the monastery some villagers had removed fallen tree branches from her Sacred Grove. And she was shouting: “Ei, ei” and the people left the wood and run away. I entered the church, nobody was inside. I made my cross and I continue my way. Evidently I have heard her." - Dimitris Paparounas (Resident in Ano Pedina village, interviewed in 18/9/2006.) 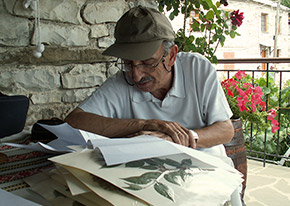 Giannis Vakamis studing the questionnaire and trees’ voucher specimens used in the ethnographic surveys of 2006-2007. Mr. G. Vakamis from Koukouli village was one of the key informants of our studies and his contribution was very valuable. (©Kalliopi Stara, 9/2006.)

Action
At the regional level, public lectures, publications in local magazines and action on veteran-trees management have been taking place. These activities aim to raise public awareness about Sacred Natural Sites and veteran trees. Local cultural associations respond very positive to these ideas and more events are planned for the near future.

Scientific work at a national and international level continues though participation in conferences, academic publications and cooperation with international Working Groups such as the IUCN (WCPA Cultural and Spiritual Values of Protected Areas Specialist Group) or the Delos Initiative.

Conservation tools
Since 2000, participatory techniques invented by social scientists, ethnobotanists and field ecologists have been used for the survey and mapping of Zagori’s sacred groves. 173 locals have participated in these studies. Most informants were older people. In the summer of 2009 a photographic exhibition by Andre Bakker drew attention to the issue. These approaches are currently extended through the SAGE program, for example the survey of the biodiversity of the SNS, focusing on specific taxonomic groups (flora, birds, bats, lichens, fungi, insects).

Policy and Law
Sacred groves in Greece, as in many other countries of the world form a largely unrecognized “shadow” conservation network. On the institutional level the Greek legislation, protects only 51 Natural Monuments concerning individual trees or groves with particular botanical, ecological, aesthetic, historical or cultural value. This leaves at least 99 % of the Greek Sacred Natural Sites officially unprotected. These monuments were declared as protected between 1972 and 1986, under the N.D. 86/1969 of the Forest Law, but because of changes in institutional level and the slow bureaucratic mechanism, any declaration of a Natural Monument faces long delays.

Results
As a result of the ethnographic research, surveys and presentations many local representatives of villages’ cultural associations have approached this initiative asking for ways of increasing awareness and protection of the Sacred Natural Sites of their area. People also ask for practical advice to manage adequately the sacred veteran trees of their villages.

"In the past many people used to dedicate fields and vineyards to the Church. The old ladies who used to go to help in cultivation digging the vineyards were saying: “Shake your shoes so as not to take the sacred land with you”. Even the soil they did not want to take …That was respect, now the respect has gone." - †Athina Vlastou (1922-2010), resident in Dilofo village, interviewed in 10/7/2006.