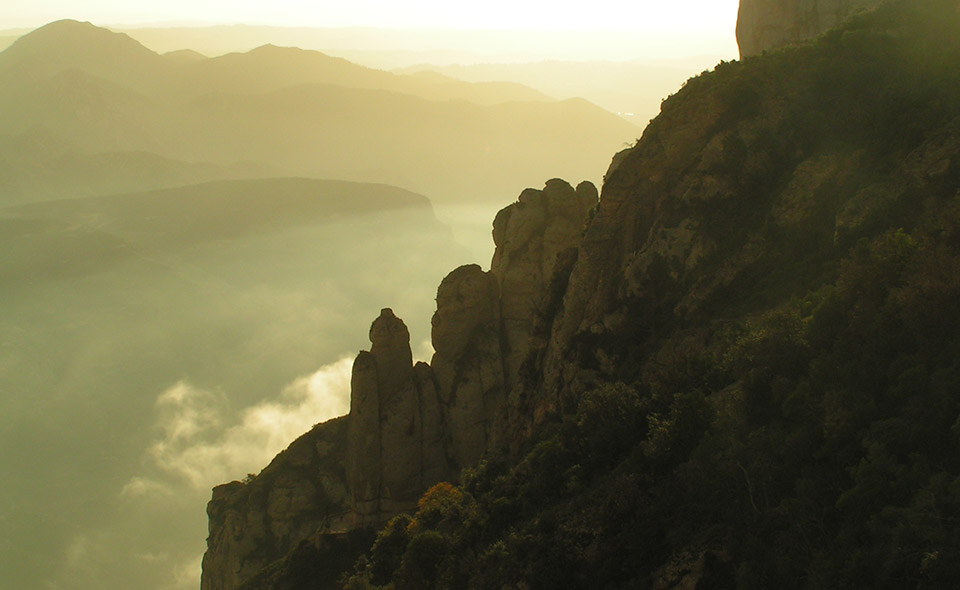 The evening sun sets over the mountain and the mastery providing the remaining tourists and inhabitants with stunning views over the surrounding landscapes that they hold in reverence. (Photo: Bas Verschuuren) 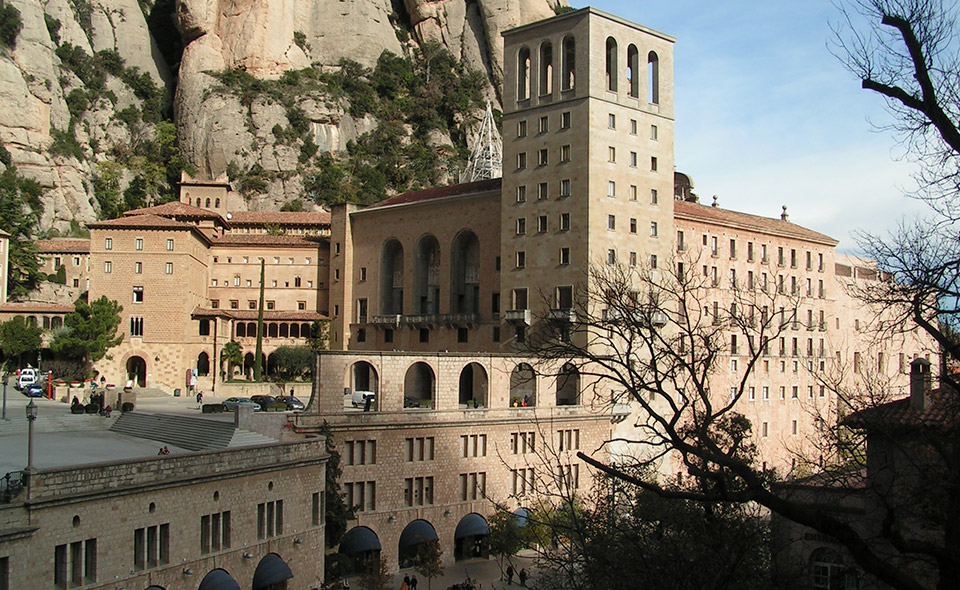 The Monastery of Montserrat is located only 50 kilometres away from the Barcelona metropolitan area. It receives about 3 million visitors every year and yet hosts a unique serene environment with several important plant and animal species.
(Photo: Bas Verschuuren) 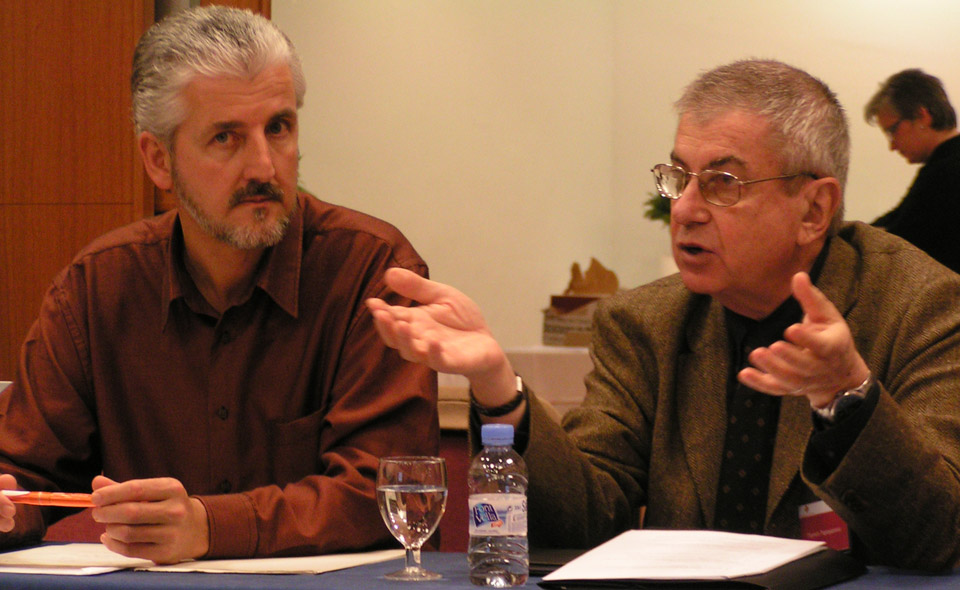 The joint coordinators of the Delos Initiative at the first Delos workshop held at Montserrat , Catalonia in 2006. Left Mr. Josep-Maria Mallarach and to the right Mr. Thymio Papayannis.
(Photo: Bas Verschuuren) 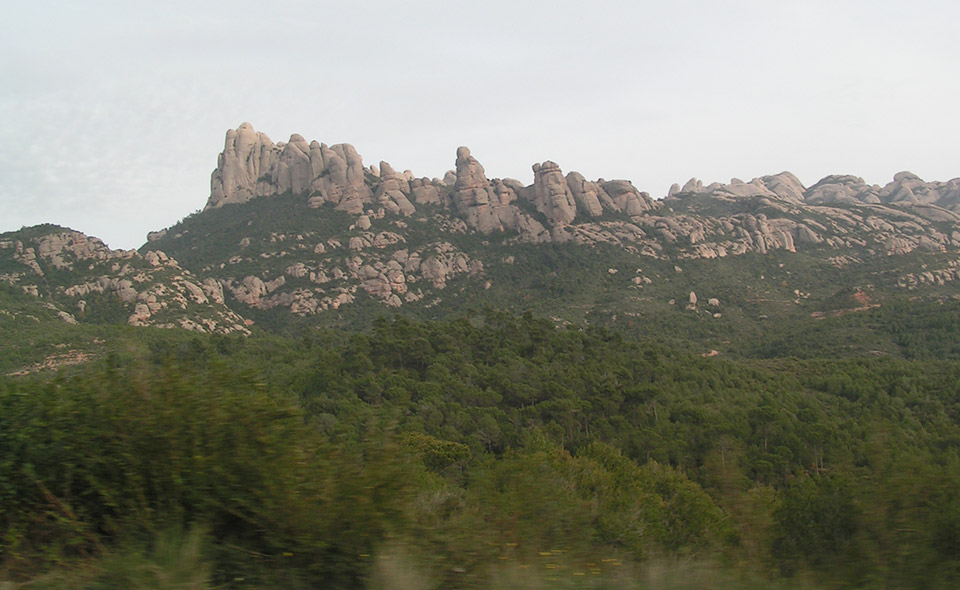 From a distance the peaks demarcate the mountain and set it apart from the rest of the landscape. Montserrat has attracted pilgrims since 1100 and over the recent decades religious tourism has increased significantly. (Photo: Bas Verschuuren) 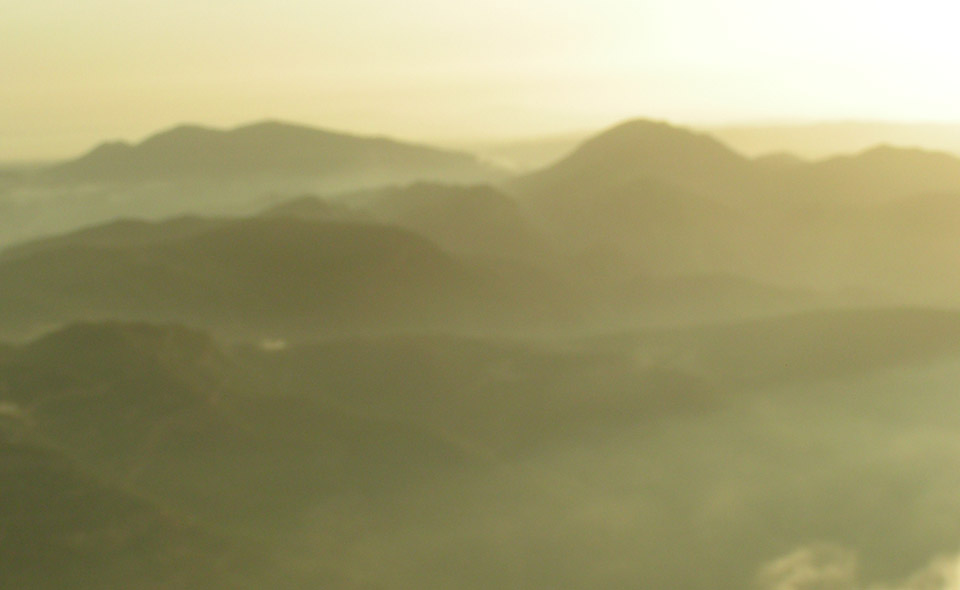 The evening sun sets over the mountain and the mastery providing the remaining tourists and inhabitants with stunning views over the surrounding landscapes that they hold in reverence. (Photo: Bas Verschuuren)

Site
Many consider the amazing rock pinnacles and the monasteries on Montserrat to be the spiritual heart of Catalonia. Located within the Barcelona Metropolitan Area they are only 50 km away from the city located in a protected area. The local Benedictine monastic community has taken care of Montserrat since they settled there in 1025. Montserat has always attracted pilgrims but since the ‘80s, Montserrat has welcomed increasing numbers of visitors, estimated to be in the tens of millions. Together with the Board of the protected area and local municipalities, the monks have worked to preserve the unique natural, cultural and religious values of Montserrat and shield it against threats posed by the growing metropolis in the vicinity.

Threats
Landslides, rock falls, storms and forest fires have been a threat the local flora and fauna throughout the ages and might get worse due to the increasingly changing climate. Since the late 1800s, tourist pressure on the site has steadily increased, and visitor numbers now reach a total of 3 million per year. Out of these, some 2,3 million are concentrated around the monastery of Santa Maria and seriously impact on the calm and tranquillity of the monastic area. In the lower areas of the mountain, urbanisation is spreading rapidly and affecting ecological and landscape connectivity with neighbouring mountain ranges. 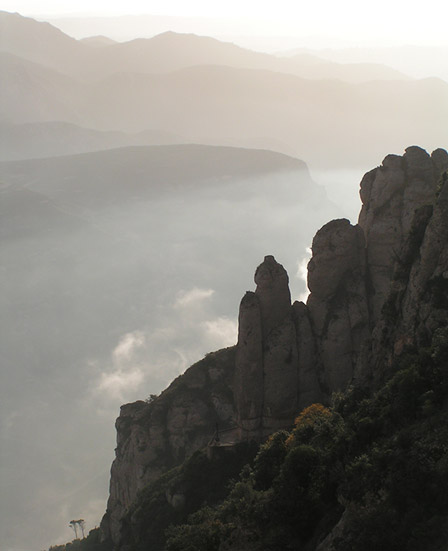 The evening sun sets over the mountain and the mastery providing the remaining tourists and inhabitants with stunning views over the surrounding landscapes that they hold in reverence. (Photo: Bas Verschuuren.)

Vision
Silence and contemplation should remain central in this respected holy natural site, and management plans are directed that way. Several town councils are lobbying for the increase of the surface of protected land in the form of an agricultural park in the lower regions of the mountain. These developments would help to protect the site against urban encroachment and especially also contribute to the peace and quietness in the lower olive groves.

Action
In 2006 the first workshop of the Delos Initiative was organized in Montserrat in cooperation between IUCN, the Park Board, the Ministry of the Environment of Catalonia and the monastic authorities. Different perspectives were exchanged with the main stakeholders plus the Catalan Federation of Hiking and Climbing Clubs, since the pinnacles and walls of Montserrat also are a highly prized climbing area. The workshop served as a starting point for the development of plans serving synergies between the different interests and values at stake at Montserrat.

Policy and Law
While efforts to declare Montserrat a national park started in 1902, the actual enactment by the Parliament of Catalonia occurred in 1989, when it was declared a Natural Park (IUCN Category V) surrounding a Nature Reserve (IUCN Category III). Around 75 % of the protected area belongs either to the monastic community or to the Catalan government. The rest of the park, mainly at lower altitudes, is private property. The whole park is included in the European Natura 2000 network. 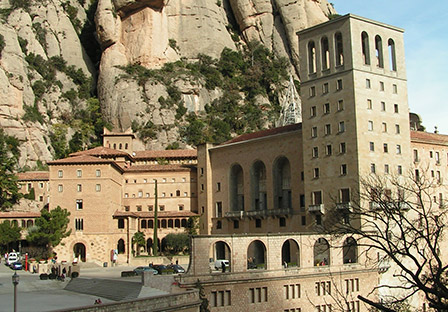 The Monastery of Montserrat is located only 50 kilometres away from the Barcelona metropolitan area. It receives about 3 million visitors every year and yet hosts a unique serene environment with several important plant and animal species.
(Photo: Bas Verschuuren)

Ecology & Biodiversity
Montserrat has a surface of about 45 km² and consists mostly of Tertiary rock conglomerates and sandstones. Though most rocks are bare, some are covered with Mediterranean vegetation, while evergreen Holm oak forests are established at sites with sufficient soil. Montserrat is home to 1200 identified vascular plant taxa, 40 of which are rare or endangered, such as Erodium foetidum, Ramonda myconi and Saxifraga callosa. The site is furthermore inhabited by the vulnerable and rare Spanish Ibex (Capra hispanica) and Bonelli’s Eagle (Aquila fasciata). 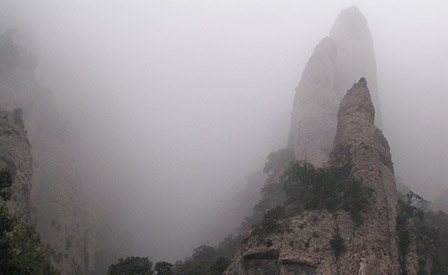 Vistas of the illustrious pinnacles surrounding the Montserrat Monastery are used by climbers and hermits alike in order to ascent to great hights. (Photo: Bas Verschuuren)

Custodians
The male Benedictine monastic community of Montserrat has lived on the mountain for almost a millennium. Throughout the centuries hermits have occupied isolated shelters located in the most remote and often upper regions of the rock formation. A female monastic community was established in another part of the mountain about 50 years ago. Both male and female monastic communities share the appreciation for the holy place and the community where they revere values such as silence and contemplation. They describe the holy mountain as having a religious and symbolic value and therefore they have always kept it open to pilgrims and other visitors. One of the monks’ constant challenges is to pass these unique values and environments on to future generations. To achieve this, they manage the public facilities and visitors’ experience of the place while adopting measures to decrease the environmental and cultural impact in vulnerable areas.

Working together
This park is unique in the fact that the management board is presided by the Catalan president while the head abbot of the Monastery of Santa Maria serves as a Vice president. Monastic monks represent their community in all major local groups. Relationships with the four surrounding municipalities are generally complex but positive. While in the past there have been conflicts on resource use, the monastic community now engages in meaningful dialogue with local town councils which helps releasing the pressure that can build up in conflict situations. A private enterprise was created by the monastic community in 1912, serving to manage all public services around the Monastery. Recently, the Monastery also allied with the Delos Initiative of IUCN to deepen and broaden the efforts in integrating the intangible heritage in nature conservation. 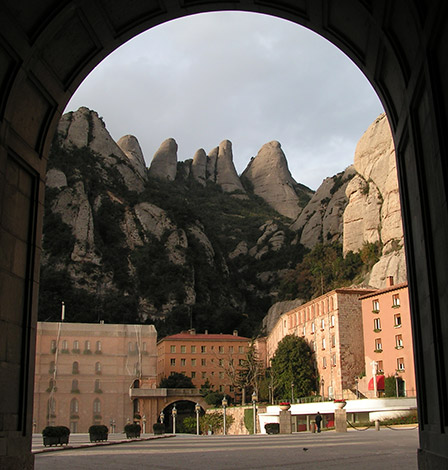 At a quiet evening the monastery of the Black Madona basks in the quiet of the evening sun and it is easy to be moved by its serene environment. (Photo: Bas Verschuuren)

Conservation tools
By managing natural resources prudently and in an effective way, the monastic community has long maintained a high natural value in Montserrat. They recently deployed new tools and approaches to protect the surrounding nature. The Park Board now supports local municipalities in resisting urban growth and pressures. The strategic establishment of walking paths draws public attention away from hermitages that are still in use for spiritual retreats and protects others from vandalism.

Results
The close collaboration with surrounding municipalities has led to the declaration of the site as a Natural park (35 km²) and Nature Reserve (17 km²) plus a buffer zone of about 42 km²: an important first result in the resistance to urban overgrowth at the site. The monastic community maintains a strong position in the Park board. The first workshop of the Delos Initiative in 2006 has resulted in an interesting book, published by the Montserrat publishing house, containing a Declaration summarising the main conclusions, and also valuable and widely accessible information on conservation measures for Montserrat as well as for several other sacred natural sites of technologically developed countries.