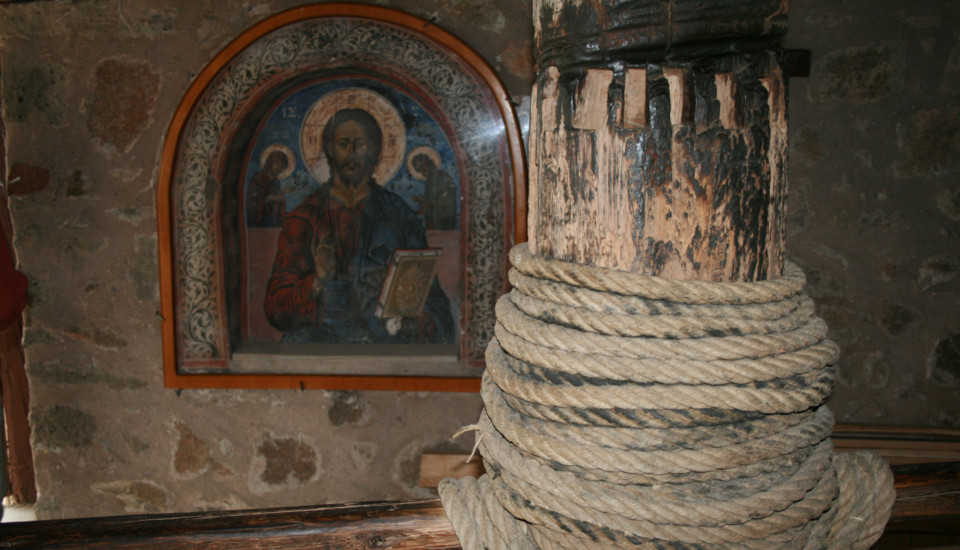 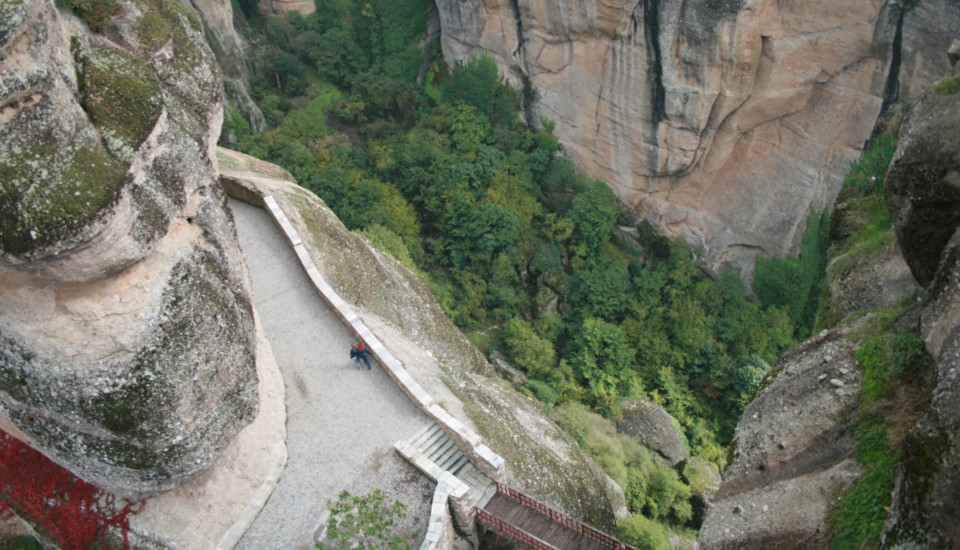 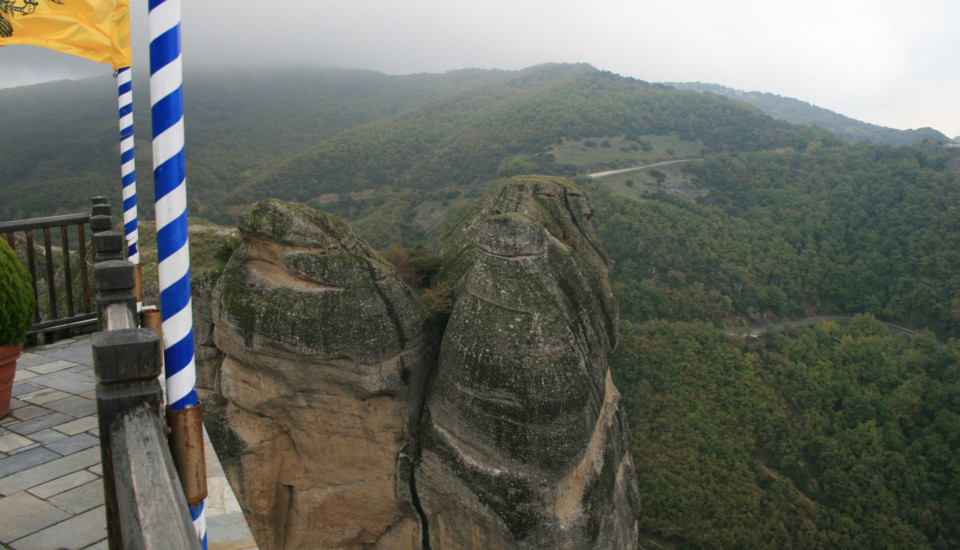 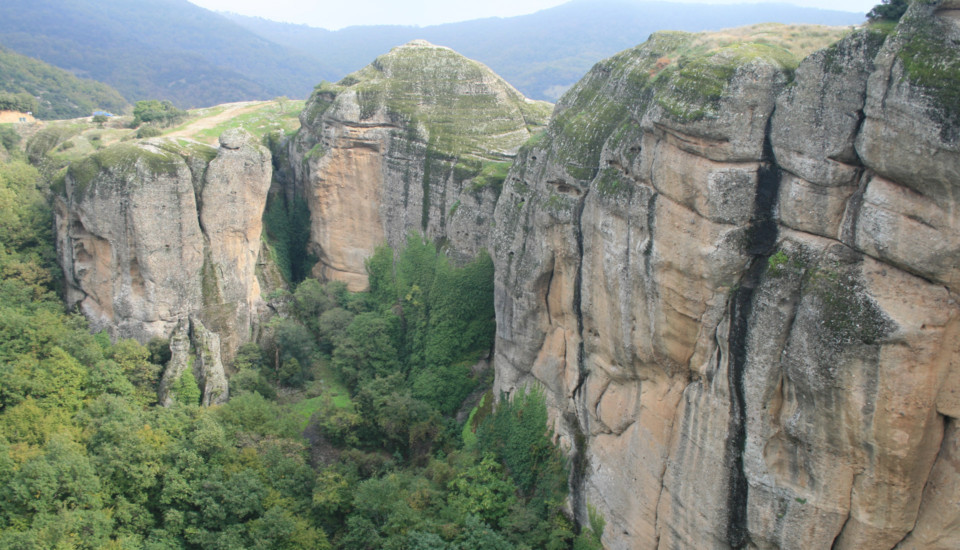 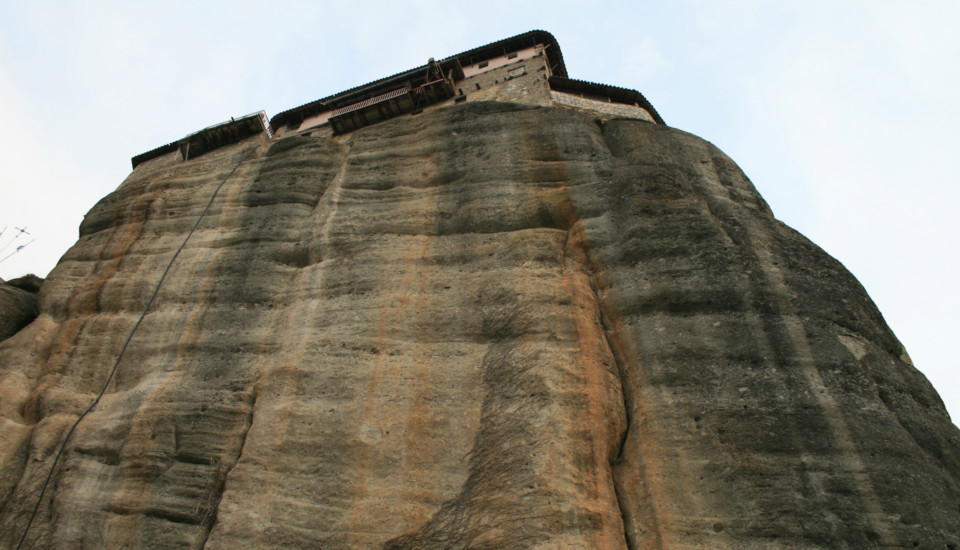 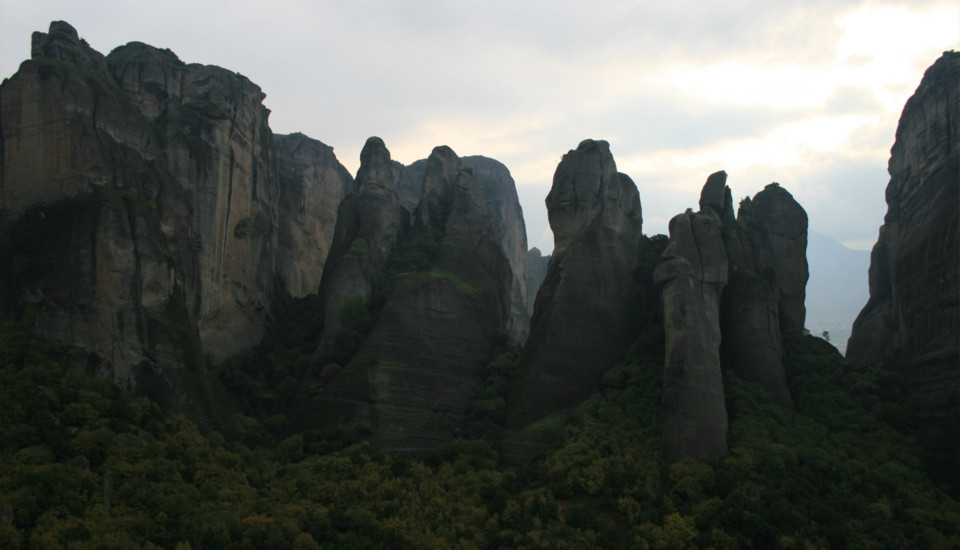 "Unique samples of medieval monastic architecture adorn the summits of the Meteora rock pillars. The first monasteries were established in the fourteenth century, when monastic communities first began to develop. In all, twenty-four monasteries were inhabited during the fif- teenth and sixteenth centuries, although today only six are still active" - Lyratzaki, 2006.

Site Description
On the plains of the Thessaly region Greece lay the Antichasia Mountains with the large sacred natural site of Meteora. It is a set of twenty four monasteries, some over six hundred years old, rising above the ground on a number of massive rock pillars which have been shaped by long exposure to powerful elementary forces, including earthquakes and rivers. It is a site for pilgrimage and confession for Orthodox Christians. Not all of its visitors are pilgrims, though. A large number of people come to Meteora to admire the breathtaking landscape, a UNESCO World Heritage Site for both its natural and cultural heritage. While tourists bring material wealth to the site, they also threaten it with their numbers. Still there seems to be hope for betterment.

"Within this land- scape of awe-inspiring shapes, volumes and textures, one has that rare sensation of feeling both small and large at the same time in the presence of these outstanding natural works of art"
- Lyratzaki, 2006.

Threats
Tourism is the most significant threat to the local religion, the culture and the local environment. Not only do the tourists directly threaten the ecosystems by car traffic, noise pollution and increased needs for infrastructure and waste management. They also bring in a cash flow with a negative impact on the ascetic way of life of certain monastic communities. With increasing modern technology uncontrolled use of pesticides and fertilizers causes soil and ground water pollution. Another major threat is overgrazing, which degrades the local natural ecosystem.

Vision
An integrated and holistic management plan is essential for the most effective protection of the natural, cultural and spiritual heritage of the region. A middle way should be found so that the sacredness of the site is maintained within its development. All stakeholders should agree on this management plan. Public awareness has to be raised, for example through visitor centres guided by monks, or by the use of road signs, explaining the close linkage between nature and sacredness at the site. Trainings at local schools and businesses could support this. Given the high credibility of the monastic communities in the region, raising this awareness would be most effective if the religious leaders did it.

Action
Different academic institutions have conducted a variety of studies to raise awareness of the problems in the region. Research meetings and seminars are organized by universities, the National Institution of Agricultural Research and development organizations. Restoration works aid the preservation of the cultural monuments.

Policy and Law
Meteora has the designation of a Special Protection Area under the European Union Directive on the Conservation of Wild Birds. It is also listed as a Natura 2000 site and a UNESCO world Heritage Site for its Natural and Cultural Values. Furthermore, it is declared a Sacred, Holy and Immutable Site with law 2351/1995, in order to protect the monuments and the heirlooms, and to safeguard their spiritual character. The main authorities in the region are the municipalities of local cities, the monastic community and the Seventh Ephorate of Byzantine Antiquities, as part of the Greek Ministry of Culture.

Ecology & Biodiversity
The area is a mosaic of hills, mountains, rocks and caves. Oak forest hills, riverine Plane forests and surrounding pastures provide habitats for 163 recorded bird species, ten of which are protected. They also house a variety of mammal species, including the red fox (Vulpes vulpes), the European Wolf (Canis lupus) and the Lesser Horseshoe Bat (Rhinolophus hipposideros). Several endemic flower species are present, among which the threatened Centaurea kalambakensis and Centaurea chrysocephala.

Custodians
Today, only six monastic communities remain at the site. The life of the monks of Meteora is marked by the cultural and spiritual values of the site, and their lifestyle spreads to neighbouring villages. While a big proportion of their notions are Orthodox, most of their norms and values are respected and understood by the general public, regardless of their background. A large part of the local people’s income depends on the tourists upon whom they convey these values. When Monks give guided tours through which they draw visitors’ attention to the spiritual qualities of Meteora, they notice a change in the visitors’ perception of the site, contrary to the standard tours given by tourist guides, in which the spiritual dimension of the site is usually missing. The monks traditionally craft various artisanal and calligraphic pieces. Hermits still inhabit various local caverns. Customs of pagan origin have been discouraged throughout the years, yet many local festivities remain tuned to the seasons.

Coalition
So far, there is not a single entity in charge of the environmental protection of the site. The Forest Inspection office, a department of the Ministry of Environment, Energy and Climate Change, leads the overall management of the region, while the cliffs are protected by the Archaeological Service. The monastic community is interested in environmental protection, and does what it can to guard its natural values. There have so far not been any united movements towards environmental protection. In an environmental study by the National Institution of Agricultural Research it was advised to establish of a central Administrative Body. It has unfortunately not been implemented due to the financial crisis.

Conservation tools
The principle tools for conservation of the local environment are a set of restrictions offered by the parties involved. In the area around the pillars building is strictly prohibited and in the nearby village of Kastraki, which is characterised as a traditional settlement, it is regulated. Ever since the site has been declared sacred, hang-gliding and rock climbing have been limited to specific cliffs. The monuments themselves are restored by renovation of the buildings and conservation of their valuable elements. The monastic community regulates spiritual tourism by maintaining a schedule by which visitors can consult monks and access the monasteries.

Results
The declarations of Meteora as a protected natural and cultural site have been important first results in the battle in for its preservation. In the process, various institutions have published several scientific reports of studies on the area, and recommendations are carefully followed by the inhabitant monks, who do their best to preserve the area. They also feel that their effort to introduce culturally oriented tourists to the spiritual aspects of the site help many to see it as a sacred monument. Yet while awareness is successfully raised, more substantial efforts are needed to keep this community sacred as it is.

"In the past, caverns were – and some still are – places where hermits resided, whilst the monasteries were built on top of the huge rock pinnacles. Moreover, many local customs are related to the changing of the seasons and Mother Nature herself" - Lyratzaki, 2006.