"I learned from the elders that you should never cut a kwatakama tree (Parkia spp.). Youngsters nowadays do cut them down, people from the city now come all the way deep in the bush to search for the bark of this tree, because it does not grow there anymore.” - Brokopondo, a Saramaccan Maroon healer.

Suriname has many sacred forests but none have been recognized by institutions other than by Winti believers. Winti religion travelled with the slave trade from West Africa to Suriname. After centuries of suppression by the church, these beliefs are still predominantly present in the country and nowadays Winti rituals are being more openly practiced. A big part of these rituals consists of handling a wide variety of magic plants originating from all over the country.

Trade in these plants provides a big proportion of the local medicinal plant trade: 56 per cent of the species sold at the medicinal plant markets have one or more applications in ancestor rites, herbal baths or protective spells. Many of these species are cultivated by vendors, others are harvested from the wild, but mostly not from sacred sites. The exact impact of the harvesting of these plants on the ecology of non-sacred sites is unknown, but only few sacred plants appear to decline due to commercial harvest (Van Andel & Havinga, 2008). One important sacred tree species in the country is the Ceiba pentandra, which houses and protects a wide variety of epiphytes, birds, small mammals, insects and even frogs.

Custodians
Winti culture has many restrictions in the ways to treat nature, which can be explained by the belief that local spirits guard sacred forests and get angry when people trespass upon their territory without any valid reason. Some traditional healers have lengthy conversations with forest deities before entering the bush trails, explaining the reason for their visit and the way they would pay them afterwards for this inconvenience.

Taboos limit overharvesting in the area. For example, few Surinamese will volunteer to cut down a Ceiba tree, a Parkia tree or a strangler fig, fearing the dreadful revenge of its supernatural inhabitants.  Many people also fear the magic power of plants like Lycopodiella cernua and Dicranopteris flexuosa. Market vendors take cultural taboos quite seriously. When clients would suspect that these rules are not obeyed, they would immediately stop buying their products.

Threats
Threats on the local culture and the environment in Suriname are latently present, but are currently not very pressing. Yet this situation may rapidly change and urgency may be required. The biggest threat seems to be the fact that the country’s pristine forests have drawn the attention of several multinational companies interested in tourism, tropical hardwood, precious minerals, hydro-electric power and other natural resources. With the government of Suriname currently owning most of the land, Surinamese people are quite insecure about the fate of their sacred natural sites. At the moment, several Pentecostal groups are increasing their influence in Maroon villages. Some of these groups tolerate the use of medicinal plants for physical ailments, but they all strongly condemn the worshipping of Winti spirits and ancestor shrines. The original tribal knowledge on how plants received their magic power, who gave them their name, why each spirit prefers specific plants or animals and how certain areas became sacred is maintained only by a small number of elders. The rationale behind sacred nature and its protection is undocumented and under great peril.

Vision
With its low population density and vast tracts of undisturbed rainforest, Suriname is often named as a candidate for avoided deforestation initiatives. The country could earn considerable income by selling its ‘carbon credits’ to industrialized countries that fail to meet emission limits. If ancestral lands become officially recognized carbon sinks, their protection is ensured, as the cooperation of local people remains a key element to protecting nature. Maroon environmental and religious knowledge should from now on be taken into account by policy-makers when selecting protected areas and planning future development projects. 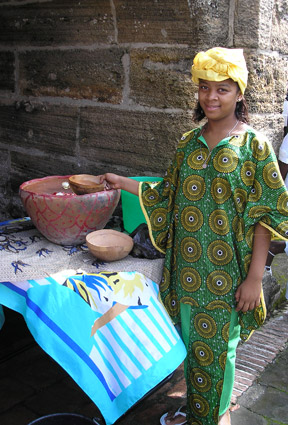 Action
Indigenous Maroons have begun to map their own territories in an attempt to seek a negotiated settlement with the government. Additionally, some researchers show interest in the traditional beliefs of the Maroons, contributing to the conservation of their legacy.

Results
Recently, an association of Maroon village leaders has been successful in their struggle for greater participation in decisions made on natural resource exploitation. Some studies have made a start in documenting the sacred plants, but much work remains to be done.