Steeped in history and the aroma of spices Zanzibar on the coast of Tanzania is a well-known tourist destination.  The islands, however, have has a lesser-known side – their Sacred Groves. 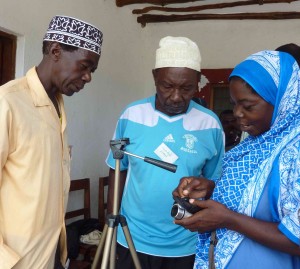 Planning the filming and demonstrating the use of the camera. Source, Mwambao Network

Concerned that these Groves, both rich in nature and culturally valued, are suffering damage and neglect, villager leaders, traditional elders and young people recently teamed up with local and international organisations to document their oral history and plan for their better care.

Using a technique called participatory video (PV) members of Jambiani and Paje villages on the South East Coast of Zanzibar Island formed two film crews, each to record different aspects of some of their Groves.   The training was given by Mwambao Coastal Community Network, a Tanzanian organisation based in Zanzibar. “There was quite a ‘buzz’ in the training workshop” said Mwambao Country Coordinator, Hajj Hajj,  “The teams were very keen to learn about the equipment and keen to get going to make their own films”.

Ali Mtumwa Hassan the village custodian responsible for all sacred sites;  “There are 32 ancestral sacred sites, several of which are forest groves in our village of Jambiani and 38 sacred sites in the sea”.

“The village of Paje has forest groves, caves and open areas which are sacred. The custodians are in the family, a 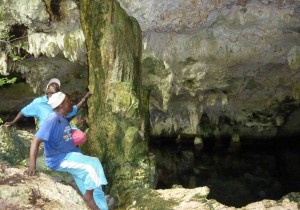 father finds his son to take over.  The custodians guide the worshipers to the site, he opens the way, the women cook offerings and clean the path and the children follow” said Mzee (elder) Ame Haji.

Despite the very long history of the sacred groves things are now different.  Hassan Ali Haji of Shotele sacred cave complained “things have changed a lot and the protection of the sites is a challenge. Young people don’t respect the traditions, many of the big trees have been cut.  Tourists come and dive in our caves and we don’t benefit in any way and a road has been cut which makes it easy to reach the caves”.

Hoping that the participatory video will increase interest and knowledge of the groves Mzee Ame Haji commented “We have made these films to record the traditions of our villages.  We have interviewed those from Paje and Jambiani and we would like to inform neighbouring villages and all of Zanzibar so that we can save our ancestral sacred sites and sacred groves” 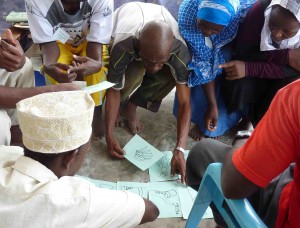 The work is part of a wider programme to support sacred groves on Zanzibar. The ZAZOSO the Zanzibar Zoological Society, who took part in the video training is working with communities to record the cultural values and ecology of the groves and assist community members to plan conservation activities.  The support to the Zanzibar communities came from a collaboration of different organisations, including The Christensen Fund, the New England Biolabs Foundation, Terralingua, and the Sacred Natural Sites Initiative SNSI. SNSI is an initiative of the IUCN Specialist Group on Cultural and Spiritual Values of Protected Areas (CSVPA).  Terralingua is a charity based in the USA and Canada working for the conservation of biocultural diversity.

As an individual, we can study at a university. But in the natural universities, the sacred places, places of energies, you can’t go alone, you have to go as Chacha warmi, as a humane person, as a couple. This wisdom emerged from our elders who told us about the Cosmic-Being. We have forgotten the Cosmic-Being; we only talk about knowledge. — David Choquehuaca, Minister of Foreign Affairs and Decolonisation of the Plurinational state of Bolivia 2011