Maya ready the world for a new sacred time

The preparations for the completion of the 13th Baktun had not gone unnoticed to the world. The international community had quickly caught the public’s attention by promoting that that the Maya predicted the end of the world as we know it. These predictions, all false of course, did generate a lot of publicity and interest of which the tourism industry and state governments benefited substantially.

But what happened to the Maya? Of course, most Maya quickly denounced the false publicity that was raving across the world like wildfire. So did the Guatemalan National Council of Maya Spiritual Leaders and Elders, Oxlajuj Ajpop, partner to the Sacred Natural Sites Initiative. According to Felipe Gomez, director of Oxlajuj Ajpop, these false predictions and publicity are indiscriminately villanising the Maya as a people. 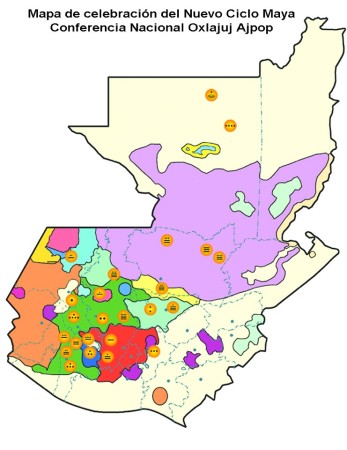 The Map of Guatemala marking the 20 sacred natural sites and 5 sacred cities at which Oxlajuj Ajpop celebrated the turn of the Maya Calendar. Source: Oxlajuj Ajpop

“We have never been appropriately consulted by the government or other outsiders about the true meaning of the event. Many of the performances that took place were based on historic reconstructions and painted a folkloristic picture of our ancestors” says Felipe Gomez. “No one ever asked how we see ourselves today as Maya or how we think the event should be celebrated, not the government and neither did the tourism industry”.

Just to be clear on this, the Maya are very excited about the celebrations for the turn of Calendar and the misinformed tidings hardly spoiled their party. Through their own networks they had been planning their activities for quite some time, see this website for example. The importance of the event did not go unnoticed to those who understand the indigenous and religious significance of this sacred time. Letters of support were received from the twelfth Kenting Tai Situpa – The Supreme head of Palpung Monastic Seat of Tibetan Vajrayana Buddhism –  as well as from indigenous Aboriginal Australians who were celebrating ceremony at  the same time as the Maya. Much of the excitement of the Maya however has to do with the entry into a new cycle of sacred time which will favour their cosmovision, sciences, social and spiritual life for the benefit of all of humanity.

To commemorate the event the Mayas in Guatemala organised ceremonies at over 20 sacred natural sites and 5 sacred cities. The ceremonies were celebrations but they traditionally also marked a time for reflection, healing and looking towards the future.

Invitación a la celebración de la Nuevo Ciclo Maya – Invitation to the celebration of the New Cycle of the Maya Calendar from Sacred Natural Sites on Vimeo.

According don Nicolas Lucas Oxlajuj Ajpop’s principal Elder and indigenous expert on the Mayan Calender, the Baktun comes to an end but this also means that the new Baktun will start. The new baktun will last for another 144,000 days! The 13th Baktun was special because it completed a cycle which started 11, 3114 B.C. (in Maya, 13.0.0.0.0 4 Ajaw 8 Kumk’u) and spans 5,125.366 solar years.

Of course the world hailed the Maya for being excellent astronomers and mathematicians having provided the world with the most accurate calendar ever made. What is less known is that this calendar is composed of various cyclical calendars that operate much like cogs in a clock. The combinations made between the days on these cogs are known for the special events that took place during their occurrence in history. As the cyclical nature predicts these combinations of days repeat themselves in the future. Predictions for those dates had traditionally been inspired by historic events that marked those days and some had been inscribed in texts that are today known as codices.

As Mayanists increasingly shed light on these ancient scriptures les attention is paid to the 6 million Maya speaking people that inhabit Meso-America Today. The collapse of most Maya cities during the end of the classic period didn’t mean that the Maya vanished although much of their tangible culture was laid to rest. The Maya survived and adapted to colonisation but much of their scriptures did not.

Most codices were burned by the Spaniards or went underground together with the much of the traditional expression of spirituality and religiosity that marks the Maya cosmovisions. Today, after colonial history, the influence of Catholicism and civil war the Maya proved their culture to be very much alive and ready to serve the world for at least another big count. 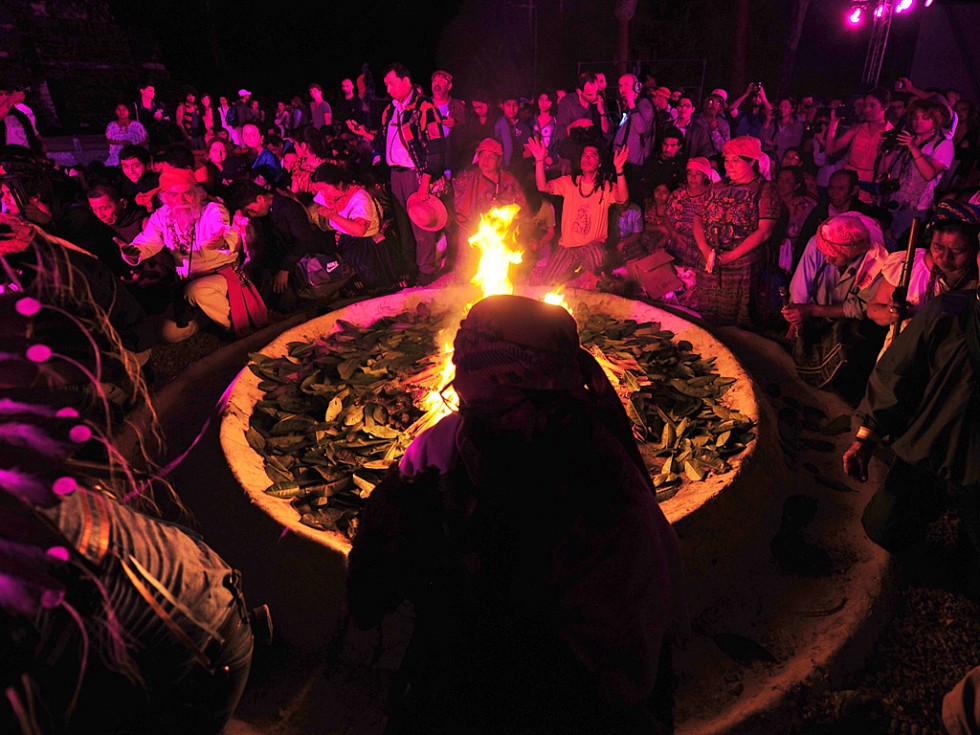