During April 2013 participatory video (PV) training was carried out in the town of San Andres Sacjabja in the Quiche district in Guatemala. The training was one part of a longer-term engagement of custodians of sacred sites in the district of Quiché  with ‘Oxlajuj Ajpop’ (an indigenous Mayan organization) in collaboration with Sacred Natural Sites Initiative. The programme,  funded by Hoja Verde Foundation, aims for enhancement of sustainable and culturally appropriate and community- based forest and natural resource management. 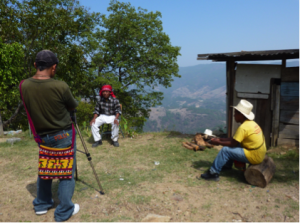 Traditional Maya elder Don Miguel Castro from the community of Buena Vista Sacjabja is being interviewed and filmed by his fellow community members as part of the training on participatory video making. Source: Lorna Slade.

The primary video focused on the value and conservation challenges of local mountain forests for the population as a whole, and on their spiritual importance for the Mayan people in particular.  The second shorter video documented the ceremony carried out at the local important natural sacred site of Chusaqrib’al on the 13th April.  The videos were planned and filmed by the participants themselves.

Forest in the area is under continued pressure for agricultural land and timber as communities cook extensively on firewood. Many areas of forest have also suffered from fires, particularly during the dry season whilst other areas are being threatened by mining.

Even though it is sometimes a fight, we must not give up.  Thanks to Oxlajuj Ajpop we are starting to organise ourselves and are talking about these issues.’ Don Miguel Castro traditional Maya elder from San Andres Sacjabja.

Village elders and custodians were interviewed and opinions and recommendations sought as part of the film-making.  The training exercise culminated in participatory editing and showing to community members.  The films are in the local language of Quiché and will soon be subtitled in both Spanish and English.

During the participatry video training the villagers of San Andres Sacjabja prepare the story board for their film. Source: Sophie Conin.

The importance of mountain forest cover for protection of springs and provision of water to local inhabitants is stressed during the main film, emphasizing the need for water in all aspects of daily life. Lorna Slade participatory video trainer.

Recommendations have been given by villagers for actions needed to conserve remaining forests and sacred natural sites with a great emphasis on awareness raising and community organization.  The application of local and national laws relevant to forest and sacred site protection is key to this and has been discussed by the villagers as part of the film and the participatory process that lead up to it.

Thanks goes out to all the villagers, Oxlajuj Ajpop and PV trainers Lorna Slade and Sophie Conin.  A screening, including the local authorities, has already been scheduled in the village for May 26th.

In the middle of Badu town, a 3-acre forest became the home of our ancestors. This forest became a sacred forest and was protected. It harbours ancient trees, reptiles, birds, medicinal plants and a stream originates here. We believe that the ancestral spirits protect our community against evil. — Nana Asubonteng, Divisional Chief of Badu community, southern Ghana