The Sacred Natural Sites Initiative and Oxlajuj Ajpop, the National Council of Maya Spiritual Leaders in Guatemala have been working together for over four years now.  What started as a collaboration to get broader and international support for the Law Initiative of Sacred Sites in Guatemala has grown into a country programme that is actively supporting site guardians with protecting conserving their sacred natural sites. After a year of community engagement Oxlajuj Ajpop and SNSI take stock. 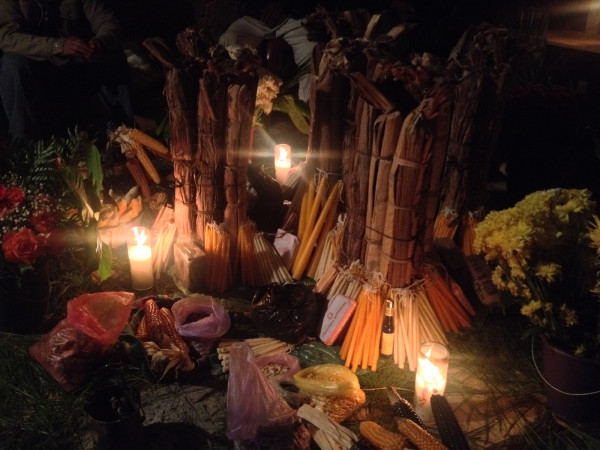 Ceremonial materials are gathered the evening before the event. These include many non timber forest products such as small balls off tree bark, wood chips and raisin rolled together with incense. Other materials are seeds to be blessed for the new season and candles in different colours that match the four cardinal points and are used in healing. Photo: Bas Verschuuren.

With the support of Hoja Verde Foundation three communities were engaged in an endogenous capacity building exercise working on themes of sustainable forest management and community governance. The Ich’K’ab or spiritual leaders that also guide ceremony at sacred sites in the forest played a special role. After last years inception workshop in Totonicapan, the Mayan communities of Richujub (San Andreas) and Chupol (Chichicastenago) were trained in participatory video. They analyzed the issues in their communities and then scripted and filmed their stories on intangible forest values and the importance of sacred sites.

In the beginning we didn’t know how much we had and what we could do but we feel stronger now, we have a plan and a film to show other spiritual leaders what we do. Don Miguel Castro, Spiritual Leader Richujub.

The communities also learned from each other through exchange visits to each other’s ceremonial centers but also through visiting Totonicapans’ community tree nursery. The latter sparked the ambition of the Richujub community whom have developed a community management plan that includes a section detailing native seed collection, construction of a community tree nursery and a reforestation plan. The plan is now expanding to include other landowners but this is seen as a major challenge for the I’ch Ka’ab especially because many of them are evangelicals and Catholics that have denounced Maya spirituality.

The forested mountain known as Sacribal is one of the most sacred Mayan sites described in the Popol Vuh but its role has been suppressed under colonialism and religious imposition. Today the Ich K’ab own the mountain tops, practice ceremony again and have made plans for its management and defense. Felipe Gomez Oxlajuj Ajpop. 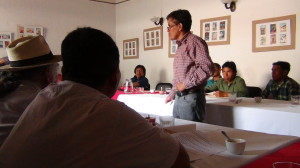 Felipe Gomez leads a discussion on community forest management at the Guatemala workshop. from a community perspective many other issues like hydro electrics and palm oil are often related to the way forests are managed. Photo: Bas Verschuuren.

At a national workshop in Guatemala City the community plans and biocultural community protocols were proudly presented to a mixed audience of spiritual and community leaders from around the country. The missing links perhaps were the national agencies and other stakeholders that pose a threat to the autonomous governance and use of community forests. The workshop did see all participants join forces to create the: “ALLIANCE FOR LIVING WELL, UTZALAJ K’ASLEMAL PAJUNAMAM” (read the press release in Spanish and in English), which is now aiming to offer models of community solidarity and governance in the face of deforestation, palm oil plantations, hydroelectricity, and mining.

Oxlajuj Ajpop supports the communities to gain control over their sacred sites and forests and helps them find ways for their management and co-management through dialogue and building bridges between the communities, the government and other stakeholders. — Felipe Gomez, Mayan healer and spiritual leader with Oxlajuj Ajpop.