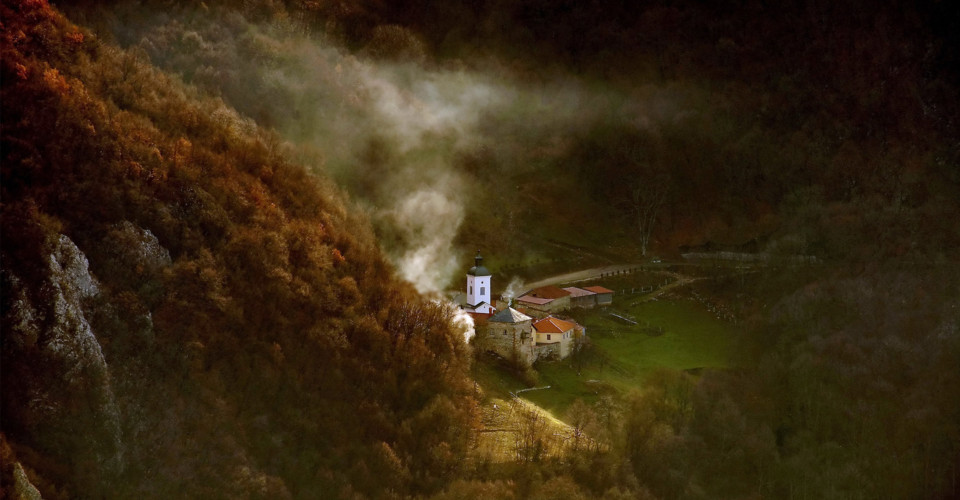 Monastery Sretenje (dedicated to the visitation of the Virgin) at the Mt. Ovcar, © Vladimir Mijailovic. 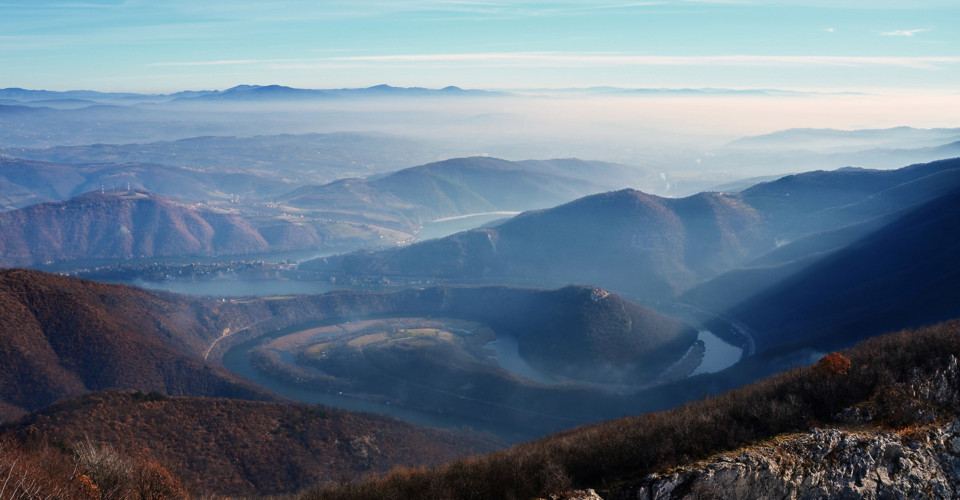 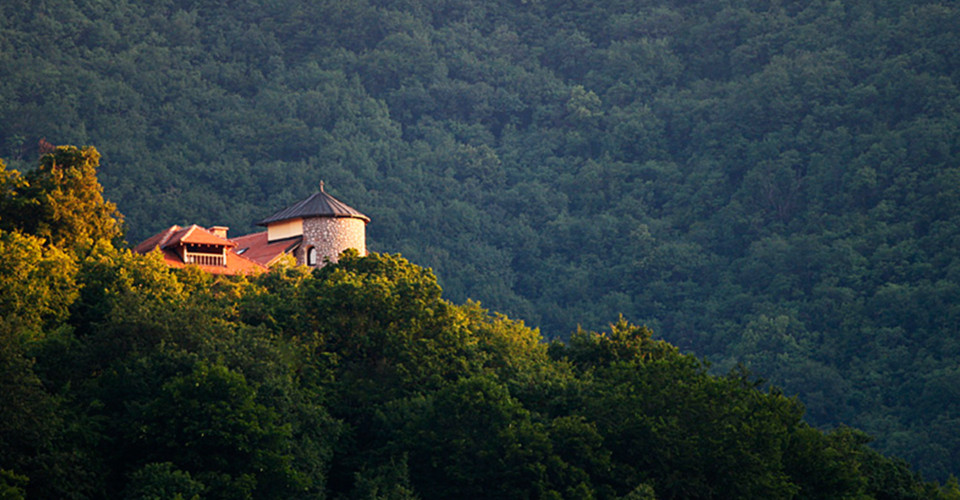 Monastery Uspenje (dedicated to the Assumption of the Most Holy Mother of God) © Igor Markov. 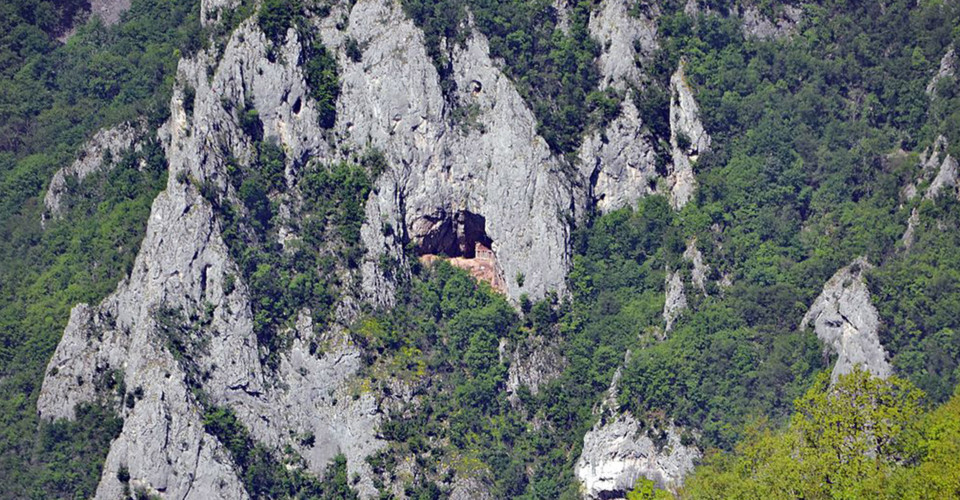 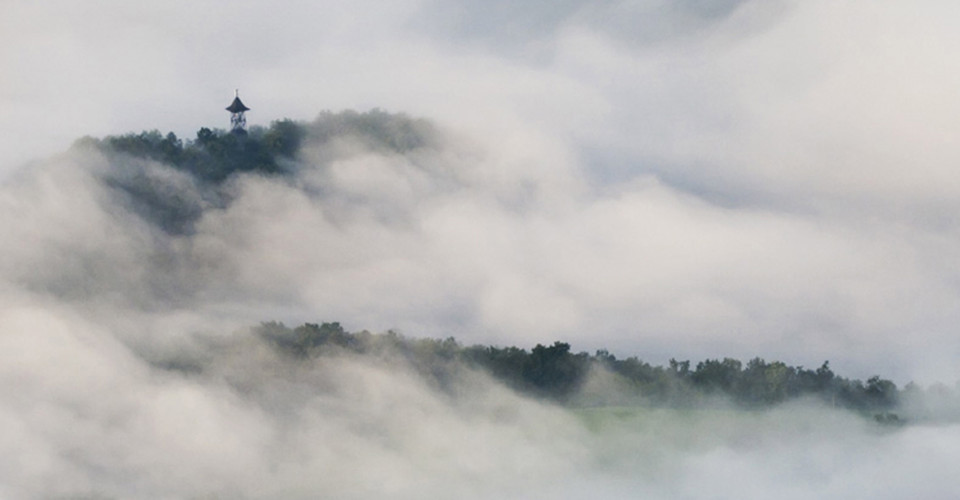 Morning view towards the Church of St. Eliah © Igor Markov.

Site The Ovcar-Kablar Gorge in southwestern Serbia, popularly called ‘Serbian Holy Mountain’, intertwines diverse natural and cultural heritage, preserving around six centuries of rich history and continuous spiritual life. Inspired by features of the secluded landscape, its medieval origins relate to the hesychastic tradition of Eastern Christian Orthodoxy. While monastic life unfolds undisturbed to this date, the last decades of the 20th century brought a variety of modern influences threatening the state of the local environment. Though the pressures of tourism are moderate and protection measures well defined, an integrated approach for functionality of this living heritage could be improved, especially regarding the role of local communities.

Threats Following the highway and railroad construction and creation of two artificial lakes with two hydro power plants, urbanization appears as a considerable threat to the state of the local environment since the second half of the 20th century. These influences include water pollution with lake eutrophication, illegal construction of cottages, waste management problems, illegal logging as well as noise and air pollution due to traffic. Whilst raising environmental awareness among the visitors might be beneficial, depopulation caused by economic factors is growing. Abandonment of rural properties in the surrounding landscape consequently contributes to habitat changes, which threaten the survival of some endangered species.

"The true guardians of the values of this area are people who know it best. As long as they do not know, they are not aware of the need to preserve, nor what to preserve…" - Interview cited in Tatovic 2016, 99.

Ecology and Biodiversity Topography, micro-climate and well-preserved, diverse habitats contribute rich biodiversity of the landscape. A refuge of some rare and endangered plant and animal species, the area is characterized by inversion of vegetation with the presence of tertiary relics as a dominant feature. Beside 600 plant species, 35 mammals, and 18 fish species, the gorge is home to 160 bird species (100 nesting in its terrestrial and aquatic ecosystems) with the status of Important Bird Area of Europe.

Custodians Since the monasteries’ foundation, monastic communities had an instrumental role in sustaining the spiritual dimension of this landscape, keeping religious practices alive and restoring the temples continuously through tumultuous periods of the country’s history, marked by wars, destruction, and pressures of ideological changes (Radosavljevic 2002). Once the centre of medieval literature and transcription activities (Rajic and Timotijevic 2012), the monasteries safeguard objects, manuscripts and memories of events that hold great cultural and historical value. St. Nicholas Monastery still preserves the Four Karan’s Gospels, a rare example of Serbian miniature painting influenced by Islamic art, made by an Orthodox priest and a Muslim master calligrapher in 1608. The Kadenica cave, is a memorial for the 500 people that sought refuge and were burned while seeking refuge from the Ottoman army in 1815. Nowadays there are nine communities living in the gorge. Hermit way of life has vanished. Monks and nuns often engage in agriculture at their estates, some cultivating vineyards and producing herbal remedies. Life at the Monastery of Preobrazenje (dedicated to the Transfiguration of Christ), which also manages the St. Sava church built in the cave that was once a medieval hermitage, unfolds according to the Hilandar typicon written in 1200 at Mt. Athos. Most of the tours in the area are provided by tourist guides, but visits inside the monastic complexes are conducted by monks and nuns. On major religious holidays monastic gates open to welcome visitors. 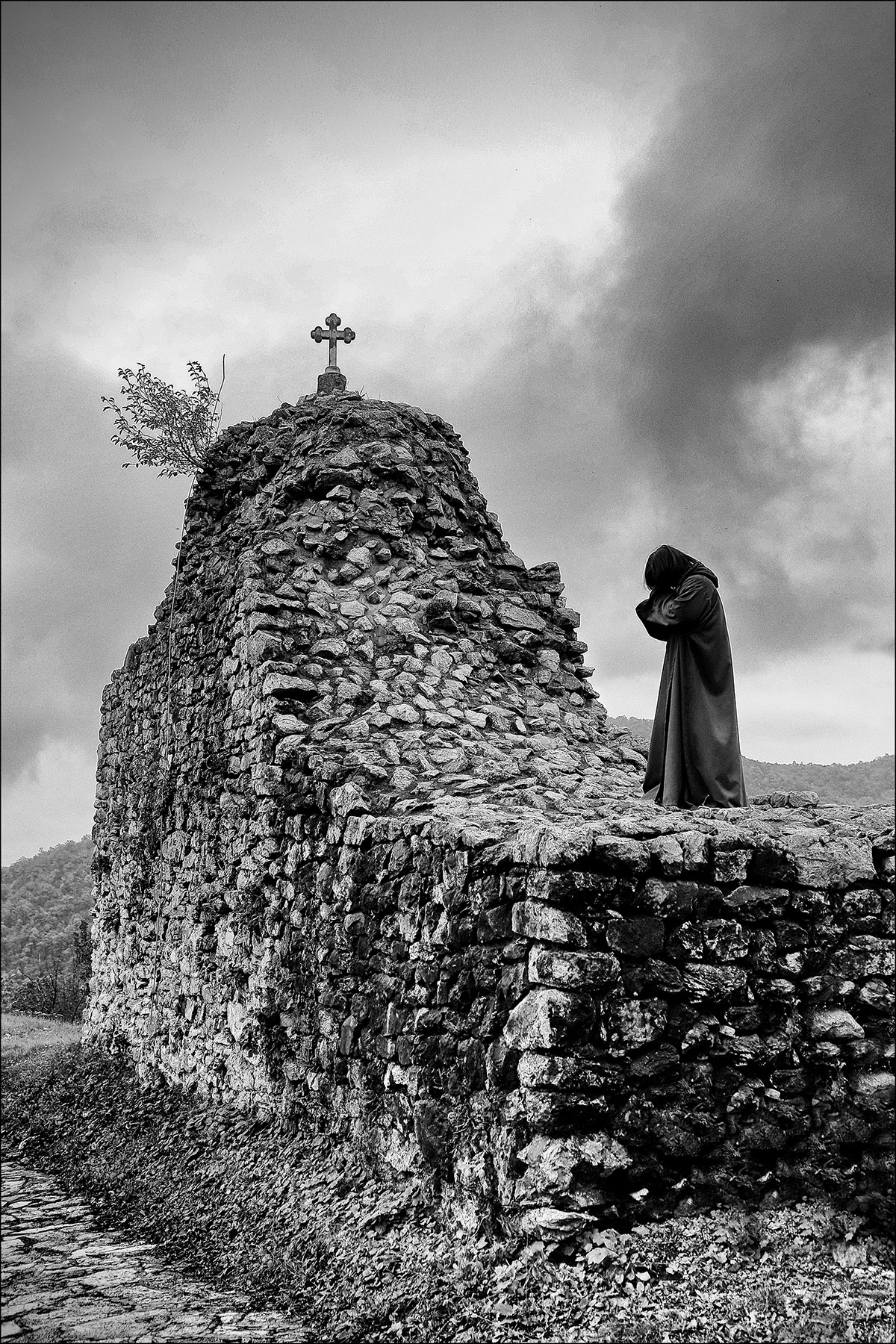 A person praying on the ruins of a medieval tower near the Monastery Uspenje (dedicated to the Assumption of the Most Holy Mother of God). © Jan Valo 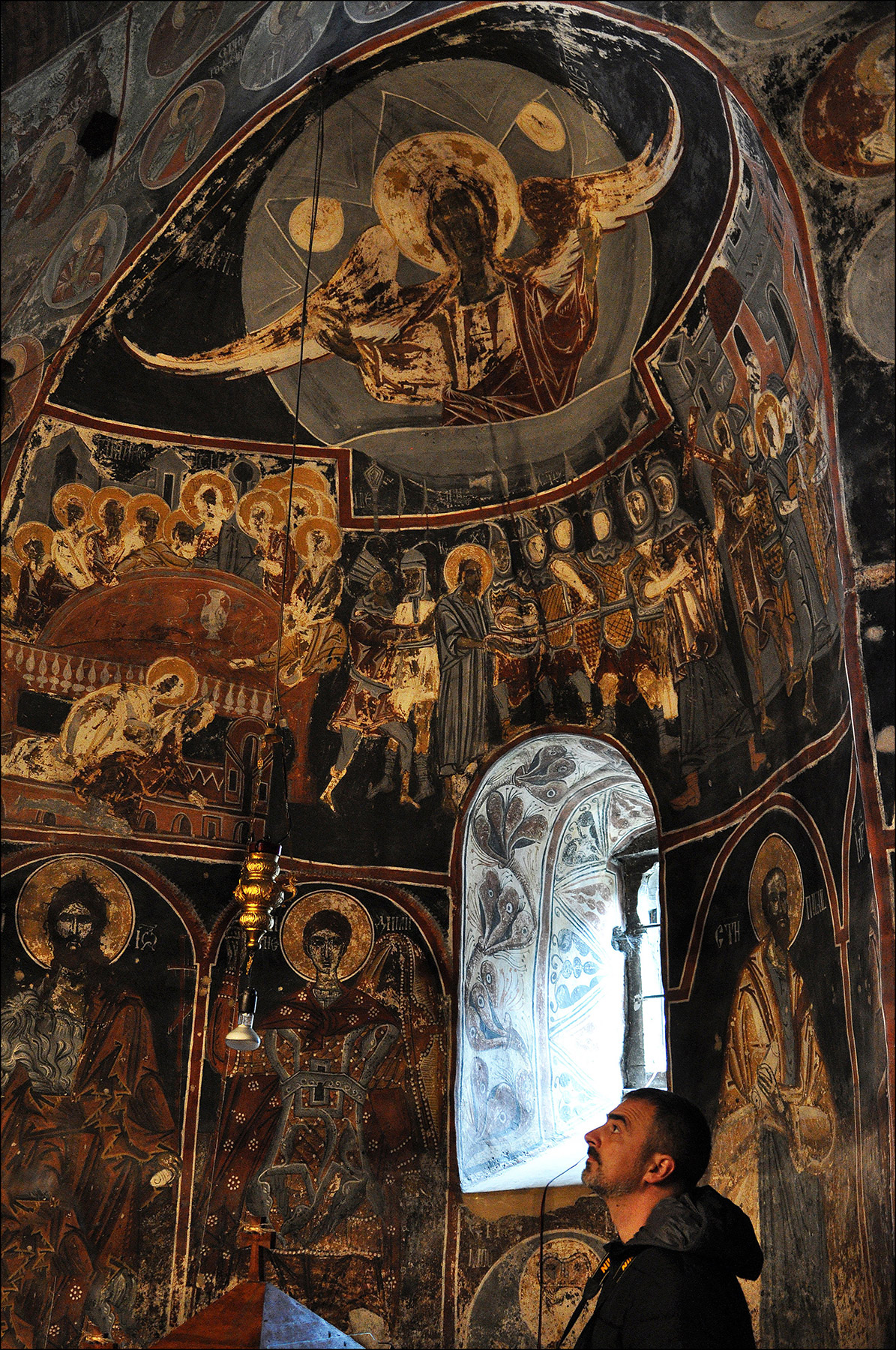 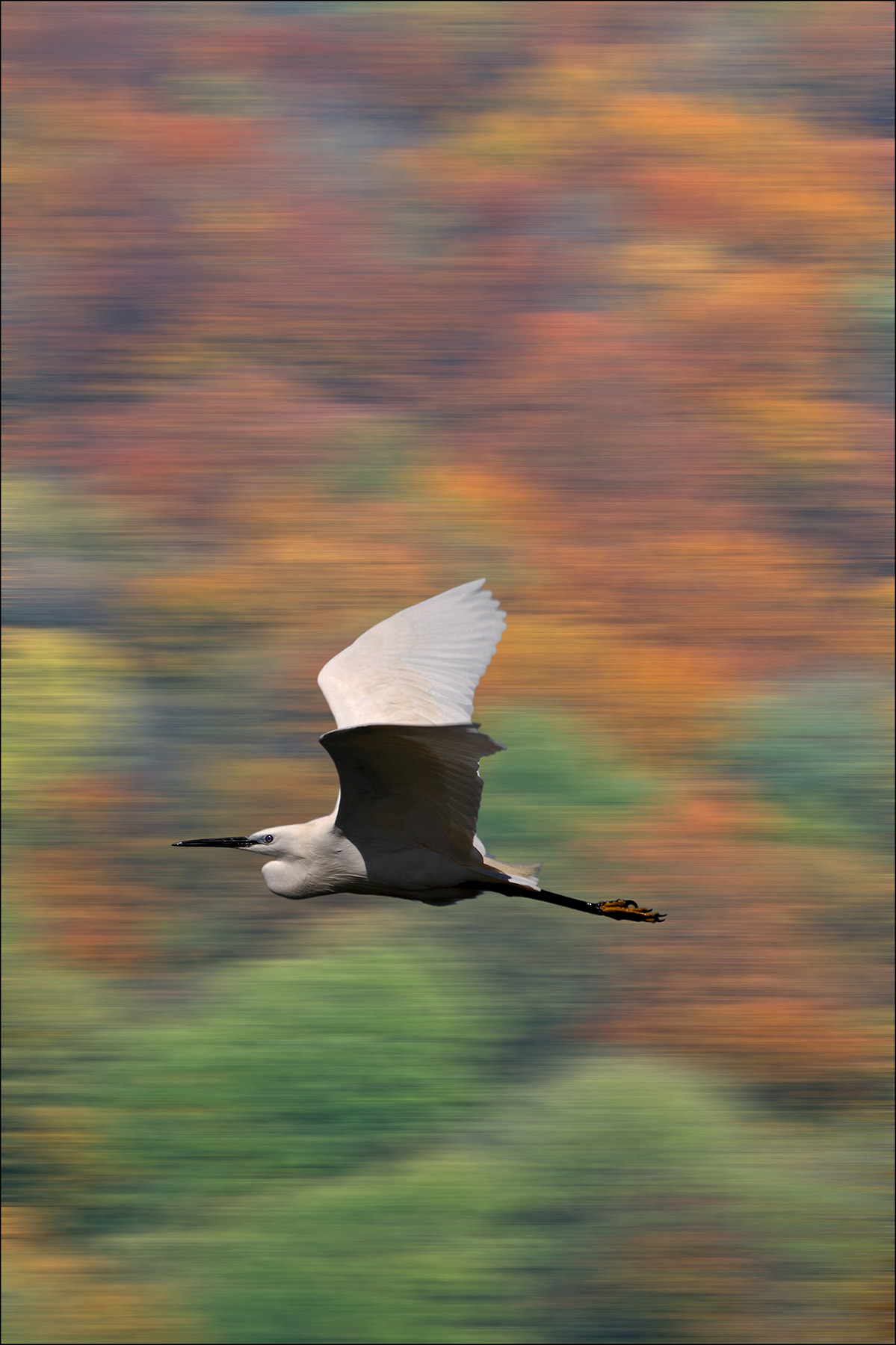 Vision The current management plan focusses on religious and health tourism, scientific research, educational and sport activities, through collaboration with academic, research and artistic organizations and public institutions. With systematic measures for control and prevention of environmental degradation, the goal is a holistic and integrated concept of monitoring that would engage local communities in public awareness projects, and sustainable development of new and existing activities based on tradition and spiritual values of the landscape.

Action So far, research studies have been carried out investigating the local environment, especially biodiversity monitoring, as well as architectural and cultural heritage. Projects promoting the conservation and unique values of protected area have been undertaken in collaboration with different public and non-profit organisations, through activities such as international art symposium, art colonies, calligraphy and icon painting workshops (Djolovic 2016), exhibitions, lectures, sport and educational activities. Besides ecclesiastical publications, twice a year, Tourist Organization publishes a specialized publication which serves as a report about the latest results in conservation and research of the protected area.

Coalition A network of active stakeholders, including public institutions and organizations, researchers, artists, local authorities, monastic communities and local residents, works on providing projects toward conservation of the area. Guidelines are provided by the ministry for environmental protection in collaboration with other relevant ministries. The Tourist Organization of Cacak is officially appointed to manage the protected area, ensuring implementation of the programs of conservation and development. The realization of these plans has been significantly slowed, mainly due to financial causes.

Conservation tools There is a set of restrictive measures of the 2nd and 3rd level of protection, defined for the area by special ministerial decree in 2000. These stipulations restrict actions potentially harmful to the state of the local environment, including those that could disrupt geomorphological features of the terrain, unplanned construction, logging, hunting, collecting endangered species, artificial breeding and introduction of wild species (Regulation on the protection of the landscape of outstanding features "Ovcar-Kablar Gorge” 2000). Access to the monasteries is restricted according to the schedule of their service.

Policy and Law In 2000 the Ovcar-Kablar Gorge has been designated for protected natural asset of first category in the national categorization of protected areas, as “an area of extraordinary landscape diversity, beauty and attractiveness, unique and very important cultural and historical site with nine monasteries, religious and other sacred and memorial objects and features, outstanding monument of geological heritage as a significant example of the interaction of geological, geomorphological and hydrological processes and phenomena, area of diverse and multiply significant flora and fauna” (Regulation on the protection of the landscapes of outstanding features "Ovcar-Kablar Gorge". Official Gazette of Serbia, No. 16/2000, translated from Serbian). The designation is based on the Law on Environmental Protection and Law on Cultural Property. All plans and development programs are subject to national spatial plan and its protection regimes, which recognize the area as a protected zone with monumental heritage. Main authorities in the area include ministry of agriculture and environmental protection, Tourist Organization of Cacak, ecclesiastical authorities (managing the monasteries and their estates), and two local municipalities.

Results The designation of the Ovcar-Kablar Gorge as protected area, with subsequent research studies, has been successful in uniting different stakeholders in an effort to stop the environmental degradation, and in recognizing the need to safeguard the heritage of this landscape, locally and regionally. However, better inter-sectoral cooperation with an interdisciplinary approach is required to rethink the role of local communities in the decision-making process, particularly the Ovcar Spa which, abundant in thermal waters, sits at the heart of the region. While various revitalization plans (sometime discordant with the values of the protected area) remain on hold due to financial reasons, the ageing population of the village is rapidly decreasing and pressures of restrictive environmental protection become a burden for living.