A canoe pilgrimage to the isle of Boreray, Scotland

For Lewis raised SNSI advisor Alastair McIntosh, inflating his canoe and taking it for a spin around the Hebrides Islands was not a story of heroic outdoor activity. Alistair, who’s been long involved with reading the soul of landscapes and interested in people’s deeper intertwinements with nature, headed out for a pilgrimage to the sacred sites surrounding his homelands. 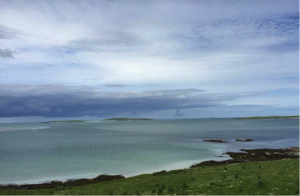 The Isle of Boreray, seen as two low humps with a beach in between when viewed from the spot on North Uist. Alatair and Verene paddled the 2 miles out from the point by Siabaigh, Isle of Berneray, jutting out on the right.Photo: Alastair McIntosh.

It was only logical he’d get there paddling, as the Outer Hebrides are the furthest west in Scotland as one can get. Needless to say, it’s not a densely populated place with public transport serving you to visit each of its corners. Surprisingly it wasn’t always like that. History tells us that during medieval times these islands acted as safe havens, trading posts and religious centres along a busy highway frequented by seafaring folk from Scandinavia and Europe.

The Isle of Boreray off North Uist and Berneray on the Western Isles has been the burial place of monks of the Celtic era, but its sacred history didn’t start there, and neither did it stop there. With each stroke of his paddle, Alastair with his wife venture deeper into the complex history of the Isles’ sacred places. He explores the origins of the early medieval incised cross, touches on burial mounds, curious rock features, prehistoric cup marks and abandoned settlements.

The inspiration for his trip came after working on his book entitled “Island Spirituality” in 2013. He was on a trip researching pilgrimage around the Hebrides and sitting in a taxi waiting for the ferry to cross over.

Two miles off North Uist is a tiny island that I’d yearned to visit ever since the local taxi driver pulled in, pointed it out, and solemnly said: “That is the island of Boreray, the birth place of the grandfather of Neil Armstrong, the first man on the moon.” I thought – “So, here’s a people who know a thing or two about pilgrimage” – and a fortnight ago, pilgrimage was indeed the spirit with which Vérène and I paddled out into the Atlantic. 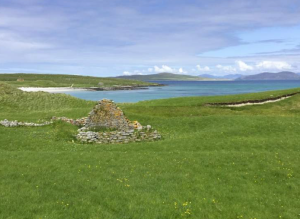 Cladh Manach, the Monk’s Field. All the monks that died in the islands that lie northward from Egg were buried in this little plot: each grave had a stone at both ends, some of which are three, and others four feet high. Photo: Alastair McIntosh.

What can be said, is that for many of the islands north of Eigg up as far as Harris, Boreray is a very central place. One stands there surrounded by places that have deeply sacred ancient associations – wells, temples (pre-Reformation chapels) and place-names. For those interested in this intriguing history and sacred geography in the Western Isles, read Alastairs full photo report on the canoe pilgrimage.

Alastair McIntosh serves on the advisory group of the Sacred Natural Sites Initiative. He is a fellow of the Centre for Human Ecology and of Edinburgh University’s School of Divinity, and a visiting professor at the University of Glasgow. His books include Soil and Soul (Aurum 2001), Spiritual Activism: Leadership as Service (just published by Green Books), and Poacher’s Pilgrimage: an Island Journey, which is due in 2016 from Birlinn, and about a pilgrimage by foot through sacred natural sites in Scotland’s Outer Hebrides.

In the middle of Badu town, a 3-acre forest became the home of our ancestors. This forest became a sacred forest and was protected. It harbours ancient trees, reptiles, birds, medicinal plants and a stream originates here. We believe that the ancestral spirits protect our community against evil. — Nana Asubonteng, Divisional Chief of Badu community, southern Ghana