In the Niger delta, the Biseni and Osiami people live together in harmony with local crocodiles. The lakes were the crocodiles live lakes are considered sacred and the crocodiles are seen as brothers to the Bisini and Osiami. Whenever a crocodile dies it gets a funeral just like a human being. This co-existence is threatened by a growing influence of international economic interest such as oil and fisheries has considerable impacts on the lives, values and practices of local and indigenous peoples in the delta. 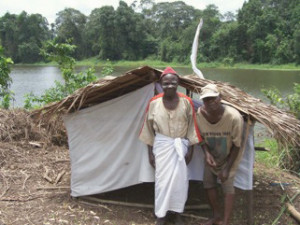 Priest and assistant in front of shrine erected for sacrifices to the lake god at lake Esibiri (Besini). Sacrifices carried out in the shrine are mandatory and form an important function before and after the fishing festivities. Photo: D.E. Anwana.

the crocodile is like our brother, and so cannot be hurt

The rising presence of multinationals also impact indigenous ecological governance of the natural resources in the region and threaten the ecology. More work means more people and more people increases the demand for fish. As local people are forced to adopt unsustainable fishing styles that generate more revenue, such as dynamite fishing, their traditional sustainable fishing practices are abandoned. The traditional fishing system separates lakes in two categories: those that can be entered, and those that can not be entered. Those categories rotate to maintain a balance between the fish demand of the indigenous population and the time it takes for the ecosystem to restore the fish population.

This case study is based on the experience of Ms. Eno Anwana who has worked with indigenous groups in the region for over 15 years. For more information about this site and cooperation between actors read the full case-study on our site.

Mayan community and spiritual leaders, united in the organisation Oxlajuj Ajpop, have formulated a law on “indigenous peoples management of sacred sites”. Government negotiations have been underway since 2008, but still meet opposition from the private sector. The struggle goes on! — Felipe Gomez, Director of of Oxlajuj Ajpop, National Confederation of Mayan Spiritual Leaders, Guatemala