Conservation experience: Mapping Winti practices and sacred groves for protection of the forests of Suriname.

During the era of the slave trade Winti religion travelled with the African people to Suriname where they established a new connection to the land and their ancestors. Today, their descendants still use many medicinal and spiritual herbs from the groves for their sacred rituals and healing ceremonies.

The Winti belief emphasizes protection of the ecosystem. This is partly out of fear for repercussions from spirits. For example it is forbidden to harvest certain plants and sacred areas can only be entered after elaborate explanations of the reasons of the visit to the spirits. Spirits have to be feared, respected and appeased. For example no Winti would ever assist in felling a Ceiba tree, a Parkia tree or a strangler fig because they do not want to disturb their supernatural inhabitants. 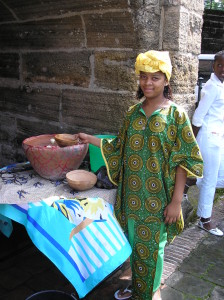 A ritual herbal bath for happiness and good luck, Paramaribo

The main threats to the sacred groves are multinationals who are interested in hardwood, minerals, oil and other natural resources out of the groves. This poses a danger to the Winti because the state often owns the land and subsoil and Winti’s sacred places are not recognized by the state.

In new planning policies however Winti followers are slowly recognised as legitimate partners. Efforts for mapping Winti sacred places are under development. Also many Winti followers joined in a coalition with the Amazon Conservation Teamwho support Trio and Wayana Indians. Also Ndyuka maroons are assisted with mapping their territories. One small success already made is by an association of Maroon village leaders who now participate in decision making on exploitation of the land.

Winti belief and African healing traditions have travelled from Africa to Suriname and from Suriname to Netherlands in western Europe. Prof. Dr. Tinde van Andel at Wageningen University and Naturalis in the Netherlands, researches the medicinal and spiritual use of plans by Winti along this route and has published on the need for conservation of Winti sites in Suriname. See for more information the case study on the website.

“For Indigenous peoples who are without or have lost a writing system these sacred sites are like a chronicle on the earth of a history of a dying civilisation… When conducting ecological evaluations, making plans for development of mineral deposits, construction of roads and so on, the location of sacred sites must be taken into consideration.” — A.P. Ninani, The conservation value of sacred sites of Indigenous peoples of the Arctic: A case study in Northern Russia. CAFF technical report No. 11, 2004.